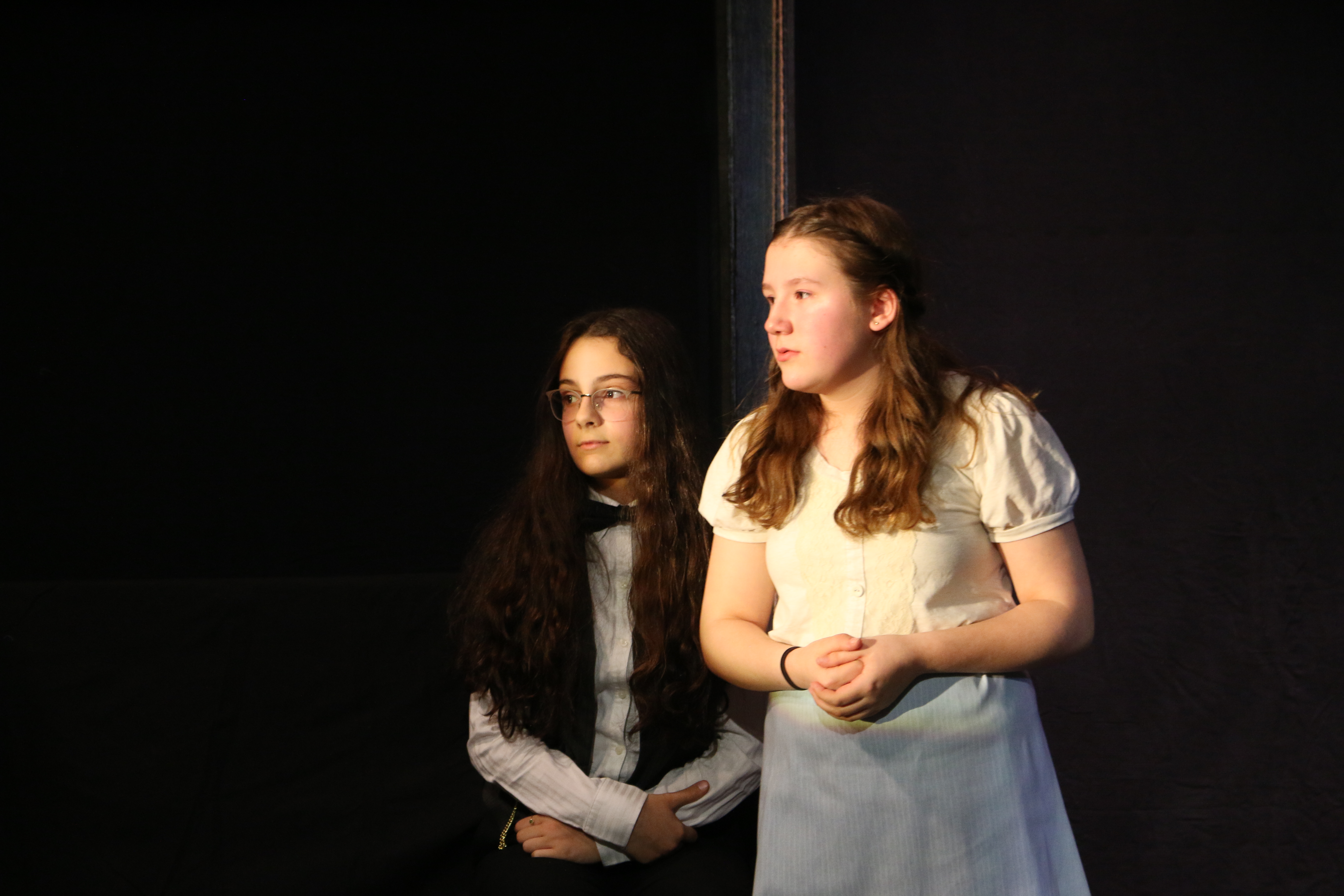 An American classic written in 1938 by Thornton Wilder, Our Town follows the everyday life of characters in the fictional small town of Grover’s Corners, NH, between 1901 and 1913. The play employs a stage manager character who addresses the audience directly and also jumps into the action by filling roles such as a soda shop owner, the minister at a wedding, and a local townsperson. In our production, eight different students shared this part, as we had so many students who wanted to help tell this moving story. The play is divided into three acts — Daily Life, Marriage, and Death — and focuses on the relationship developing between two main characters: Emily Webb, portrayed by Brooke Radosevich ’24; and George Gibbs, played by Adam Kaplan ’23, as they move from high school students and neighbors to husband and wife.

Why Wilder?
Middle schoolers considered a few plays and chose to perform Our Town because, as Matthew Archer-Nieto ’23 explains, “It is a play about real life. In real life, nothing big and dramatic happens. People have small goals they try to achieve; people and families they love, and then we die.”

The domestic drama of Wilder’s world struck a chord with our Bentley House ensemble. A note in the program on behalf of all involved, states: “As we have worked on Our Town, we have become very fond of Grover’s Corners and its citizens. We feel that playwright Thornton Wilder captured the essence of what it is to be an ordinary human being. We see ourselves in the characters’ interactions, longings, and wonderings about what life is all about.”

Building Their Own Our Town
It truly took a village to produce Our Town. Our large student ensemble worked with guest mentors from the professional theater world to achieve their vision. They learned: how to use the Laban Method of movement to help create characters and pantomime actions realistically, how to compose musical motifs that support a story, lighting and sound design, carpentry, sewing, and scenic design skills.

Bentley House students created every aspect — from the sets, lighting, and staging choices, to costumes, hair, and makeup. They even wrote and designed a Grover’s Corners newspaper in the style of the day, which was unique to this production, as the original script does not call for a set and very few props. The cast and crew went the extra mile to create all these elements to transport the audience to turn-of-the-century New England.

The production opened with elements of a traditional agricultural fair: there was music from the region and time, students handed out home-made baked goods, and the audience had the opportunity to meet the townsfolk.

Two high school students contributed to the production: ninth grader Akhil Karra, Music Director, arranged the collaborative compositions created just for this production (the play was written without any music) and directed the musicians; and eleventh grader Alexa Garcia served as Assistant Director.

At the helm of the production was Kim Guzowski, MYP and DP Theater Teacher, who ensured that every student who wished to participate as an actor, designer, director, musician, or technician had the opportunity to do so. Together, they worked many long hours after-school and on weekends with talented mentors to bring us Our Town.

Students Teaching Each Other
In addition to learning from the expertise of Dwight faculty and outside pros, students learn from one another. “The older students mentor the younger students and take the lead in contributing artistically,” Ms. Guzowski says. “Those who have engaged in the process before, help those who are creating theater for the first time. This year, we had several eighth graders who participated for all three years and I will miss them very much next year: Matthew Archer-Nieto, Dev Banerji, Julia Dubrovsky, Tristan Fraley, Amelia Gayle, Francine Gonzalez, Adam Kaplan, Vlad Kolotnikov, Ben O’Connor, and Brennan So. It has been a pleasure to work with the Bentley House Ensemble, creating the beautiful, poignant world of Thornton Wilder’s Our Town.”

After their fellow middle schoolers saw the play, the cast and crew gathered for a post-performance “talk-back” with the audience, sharing thoughts and impressions. After all the time spent together on this intensive creative collaboration, Vlad Kolotnikov, commented, “The cast and crew are really like a small town!”

Watching them work their magic, we agree!