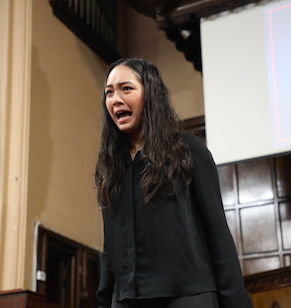 A Dwight First: Abigail Arader '18 Is a Manhattan Finalist in the National Shakespeare Competition!
Mar 6 2018

Congratulations to senior Abigail Arader, who won Dwight's 35th annual Shakespeare Competition, and represented our school proudly in the New York City semi-finals, winning a spot in the final round.

Congratulations to senior Abigail Arader, who won Dwight's 35th annual Shakespeare Competition, and represented our school proudly in the New York City semi-finals, winning a spot in the final round. She is the first Dwight student to advance this far!

Abigail, one of four Manhattan finalists, will be among 12 total competing this Friday at the Morgan Library. The winner will represent the entire New York City region at the Nationals at Lincoln Center in April. At this level in the competition, Abigail will perform a prepared monologue, a prepared sonnet, and a cold monologue — one that she does not know ahead of time and will be given a mere ten minutes to prepare.

With her strong acting spark of genius to draw upon, Abigail will certainly be up for the challenge! She has performed in many theater productions on campus and participates in our Master Theater Program. A highly accomplished singer, who most recently performed a duet in our Carnegie Hall concert, she will be appearing soon as Velma in Dwight's spring musical, Chicago.

In February, when Abigail competed in the final round of Dwight's Shakespeare Competition at a special assembly, she did so alongside other formidable challengers in what is a particularly special tradition for us. The National Shakespeare Competition was launched by Dr. Paul Beresford-Hill MBE, Anglo-American International School, which joined forces with Dwight in 1993.

After advancing through two preliminary rounds, top students from each grade performed a prepared monologue for a panel of faculty judges. Rules prohibit the use of costumes, props, or accents, so the actors relied solely on dramatic movement, expression, and voice.

Congratulations to Dwight's 2018 finalists and grade winners, who are indicated with an asterisk:

Abigail's winning performance was a portrayal of Lady Anne from Richard III. Watch her and all the competitors, who deserve an extra round of applause!

We wish Abigail the very best of luck in the New York City finals on Friday and know that she will make us proud, regardless of the outcome!

Thank you to student photographers Arthur Zani '19, Jonathan Dever '20, and Pada Schaffner '20 for capturing these moments: