Born in Houston, TX, he was two when the Karras moved back home to Mumbai for business. Subsequent relocations to Delhi and Bangalore followed, where Akhil was enrolled in IB Schools. He and his parents, who had always pursued a quality international education as their top priority, later chose Dwight School London when they moved to the UK in 2016. Their decision was an easy one; Dwight’s global network of top IB World Schools enabled Akhil to transfer to our campus in New York, where the Karra family had planned to lay down longer-term roots.

Akhil enjoyed studying in London prior to joining us here as a ninth grader. The transition academically was easy, thanks to the seamless nature of the IB curriculum across schools. The move was also easy socially, as Akhil immediately felt right at home and part of the larger Dwight community, having forged friendships with New York students during the first Dwight London Choral Extravaganza.

Making connections through music has been at the core of Akhil’s Dwight experience. After starting with the violin at age four, he switched to piano at nine, and reports that it was while in the UK that he became serious about music. “I worked with Mr. Kraft, Head of Music at Dwight School London, in the classroom and he really helped me to push myself to open up musically. I joined the Rock Band, Vocal Ensemble, and sang in the first choral festival. I also sang in Dwight’s global concert that year at Carnegie Hall, where I met many of my current classmates and friends from other campuses,” Akhil reports.

It was the following year when Akhil’s talents were seen center stage at our 2019 global concert in Shanghai. He sang a duet with a peer from Shanghai; the pair gave a beautiful rendition of “Shallow” from A Star Is Born. Akhil also sang with the London Vocal Ensemble and played piano with the New York band, moving effortlessly from one group to the other. 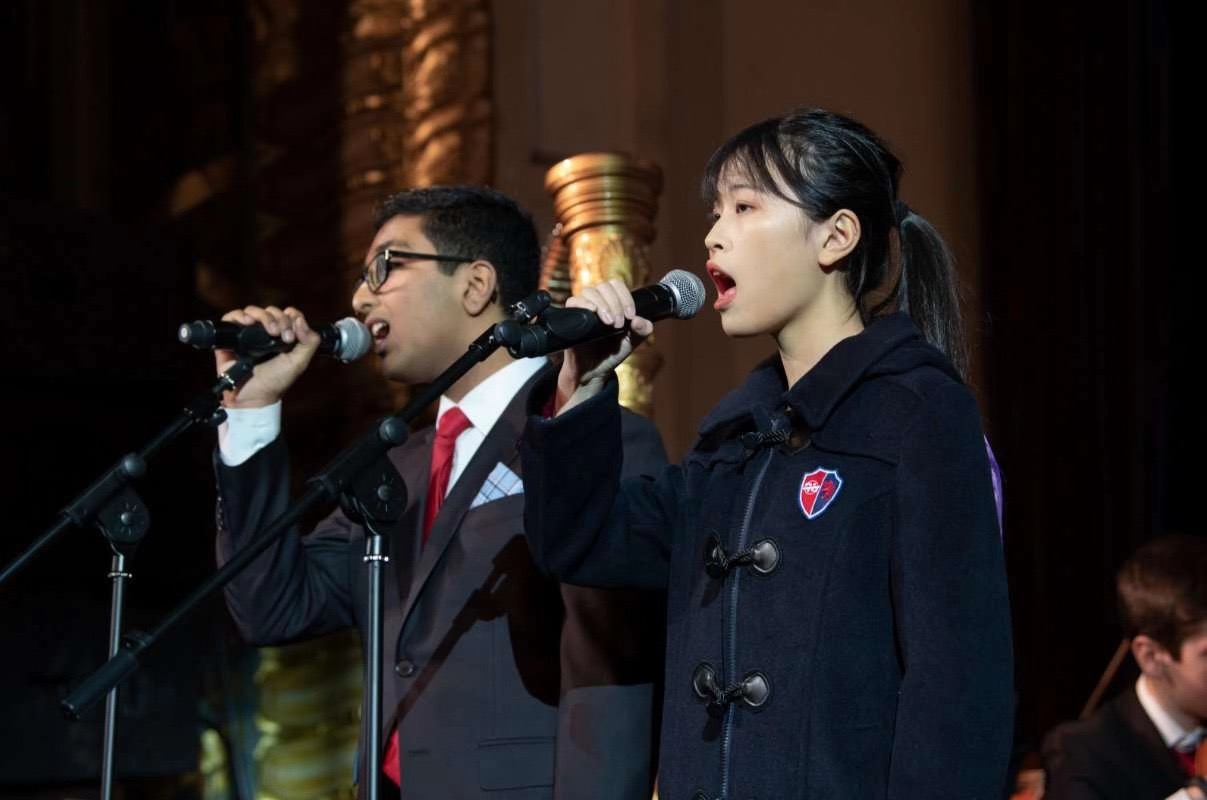 This year, Akhil returned to center stage at our global Carnegie Hall concert – this time on the other side of the baton as a conductor! Learning to conduct had always been an interest and Akhil was inspired to do so after feeling the joy of conducting and passion for music of another Dwight mentor, Alistair Hamilton, former Head of Performing Arts in New York. “I have that much passion for music, too, and want to show it! So when I met Mr. Novod last fall, he was so open-minded and really wanted to nurture my passion like Mr. Kraft and Mr. Hamilton,” Akhil explains. “Mr. Novod saw what I could do and helped me get ready to conduct the Global Orchestra’s performance of "The Ludlows” from Legends of the Fall at Carnegie Hall in February.”

Akhil continues, “I wanted to lead a group at Carnegie Hall and show that it’s cool to conduct. Conducting is a lot of responsibility, too. Mr. Novod said, ‘you’re the head of an orchestra, but don’t worry, I am behind you the whole time.’ His support was amazing, and while I worked with him and the musicians on the nuances of the piece, I was the one to make the final call, which was an exhilarating experience! I hope to have the opportunity to conduct again at next year’s global concert in Seoul.”

Akhil had also started composing music and last year became Music Director for the Bentley House production of “Our Town,” which is especially impressive as the play has never had a musical score! He explains, “Ms. Guzowski encouraged me to take on this role, and together with student-musicians, we talked about the play and created different melodies that fit the storyline and characters. I played the piano and led the group, and by the time we were ready to perform, we were so in the moment and played almost improvisationally.”

It would be safe to assume that music is Akhil’s spark of genius …  but it’s actually one of two sparks! The other is aviation, which has captured Akhil’s interest from childhood. His tenth grade personal project is about jet engines and Akhil wants to become an aerospace engineer.

It comes as no surprise then that his favorite subjects are math, chemistry, and physics — all of  which he is taking at the IB Higher Level. It’s also no surprise that Akhil’s favorite thing about Dwight is the sense of community — the people — he says. “On every campus, everyone is so welcoming and I’ve had the chance to make some really strong friendships around the world. And it is through music that we connect as a family. Dwight brings people with so many diverse perspectives and cultures together who share the same passions, which is the best thing in the world. E pluribus unum.
Out of many, one,” Akhil says wisely.