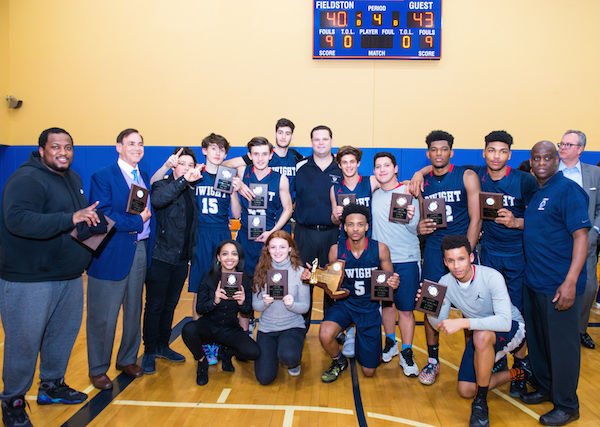 Our Boys Varsity Basketball team came roaring back into the NYSAIS Division B Championship limelight last night with a nail-biting 43-40 victory over long-standing rival Packer Collegiate!

Our Boys Varsity Basketball team came roaring back into the NYSAIS Division B Championship limelight last night with a nail-biting 43-40 victory over long-standing rival Packer Collegiate!

Coach Dave Brown '97, who also led Dwight to consecutive victories in the NYSAIS championships in 2014 and 2015, reports, "After defeating the top team in the regular season, Fieldston, behind an inspired all-around team performance led by sophomore Dajuan Piper on Saturday, we faced probably the best defensive team in the State in Packer Collegiate."

Director of Athletics Michael Horvath provides a play-by-play, "Dwight was up 26-20 at the end of the first quarter, and by the end of the third, it was all tied up at 32-32."

Mr. Brown continues, "Thanks to a phenomenal game plan crafted by Coach Dermon Player and another stifling defensive performance by sophomore Barry Evans, Dwight was able to prevail with a 43-40 victory over our league rival. Our team had an extraordinary difficult path to the title, having to play the #5, #1, and #2 seed; and there is no way it could have been accomplished without everyone stepping up and playing his role. It was a total team effort and I am so very proud of their accomplishment!"

The team's not done yet! Preparations begin now for the New York State Federation Tournament, where they'll face the winner of the NYSPHSAA Tournament, on Saturday, March 25. Further details will be announced.

By winning the NYSAIS Championship, Dwight's 2017 Boys Varsity Basketball team takes its place in a long and proud tradition of basketball excellence, beginning with former Headmaster Dr. M.C. Spahn. He was an All-American at CCNY and then a professional in the American Basketball League in the 1930s before retiring from the game. His son, Chancellor Stephen Spahn, was an All-American at Dartmouth College, where he established several scoring records. Chancellor Spahn's commitment to nurturing scholar-athletes and vision paved the way for our Dwight School Athletic Center, which has been home court to our proud Dwight Lions for the last four years. And what a four years it has been!