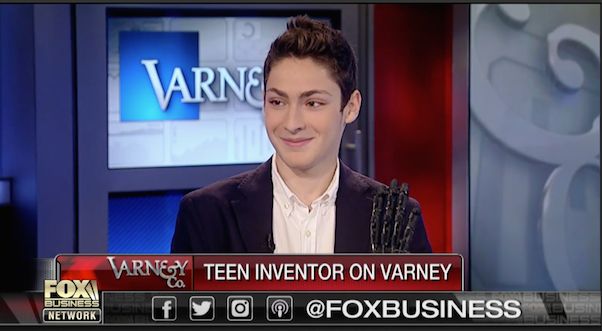 Stephane was invited to share his customizable, 3-D printed prosthetic hand designed to help people with lower-arm amputations ― hundreds of thousands and many in war-torn and developing countries ― who can't afford them. Called The Hephaestus Hand, it is intended to restore everyday basic motor skill functions, such as opening a door, picking up a glass, etc.

Unlike most other 3-D prosthetic hands, which require the wrist to be intact, The Hephaestus Hand is intended for people with amputations below the elbow and above the wrist. Most of its parts are made from the same plastic as Legos, and the hand is operated through a motor and a sensor that picks up muscle signals. The 3-D technology makes Stephane’s invention significantly less costly than prosthetics that restore fine motor skills and carry a price tag upwards of $65,000. At only $300, The Hephaestus Hand will be much more accessible and improve the quality of life after amputation for many more people, including veterans.

Stephane began working on his project in sixth grade and continued in Spark Tank, Dwight's incubator designed to nurture entrepreneurial, innovation, and leadership skills beyond the classroom.

"In Spark Tank, I learned to better manage a budget and improved my robotics and programming knowledge beyond what I thought was possible," Stephane says. "I definitely would not have been pushed to get my project to where it is today without Spark Tank. There is a community of innovation here."

What’s next for Stephane? He looks forward to beginning user testing and to refining and making the hand smaller. Presently, he is working on adding a functional rotating wrist, which no other current 3-D prosthetic hand has.

We have no doubt that Stephane will have a significant impact on the world with his Hephaestus Hand. In fact, he already has, by inspiring his peers on campus and other young innovators well beyond Dwight who have seen his accomplishment on TV and online!