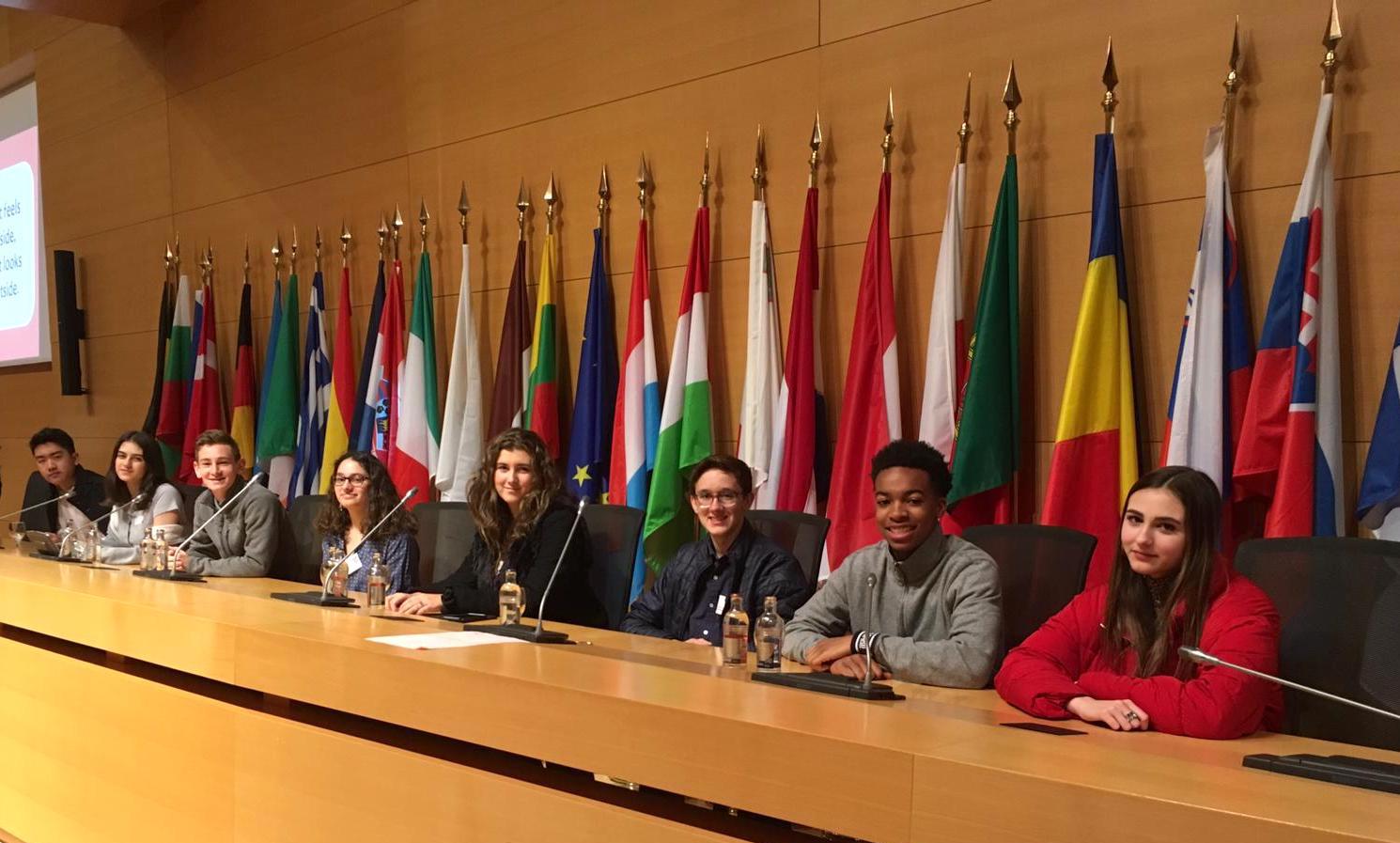 Eight Dwight students from grades 8-12 brought their passion for making the world a better place to Luxembourg, where they attended the 13th annual European Global Issues Network (GIN) Conference.

There, they joined peers from other Dwight campuses and students from all around the world to explore solutions to problems facing some of our most at-risk populations and natural resources.

GIN was launched in 2006 to “nurture and mobilize transgenerational communities of global citizens to build a just and sustainable future.” Dwight changemakers have been active GIN participants for many years, underscoring our students’ dedication to taking action and bringing our School’s global vision pillar to life.

Two teams from Dwight New York made presentations at the conference in keeping with this year’s theme: “Committing to Our World’s Most Vulnerable People, Places, and Resources.”

The first, comprised of Victoria Buendia-Serrano ’23, Gwynne Capiraso ’22, Alexander Goldenberg ’21, and Calvin Yang ’21, discussed a problem prevalent in Africa, which is the trafficking and persecution of people with albinism. According to the BBC, “90% of people with the condition [albinism] in Africa die before the age of 40.” Educating others about this pressing problem is the first step in a series of measures the team proposed to enhance safety in countries like Tanzania, where albinism is more prevalent than in other parts of the world.

Second up was the team of Cormac Bradley ’22, Carlotta Bustos ’20, Chaz Jackson ’21, and Chloe Trujillo ’21, who explored how biased immigration policies and First World prejudice have prevented Third World countries from advancing. According to the UN Center for Human Settlements, “80% of the world’s countries are classified as ‘developing countries’ with a majority of citizens living on less than $10 per day (CNN).” Students proposed means to improve collaborative relations among developed and developing countries, which would provide a stronger foundation for the growth of the latter.

Students from Dwight Schools in London, Shanghai, and Dubai presented solutions to a wide range of other problems, from fighting climate change, improving access to water, and promoting sustainable development, to protecting endangered wildlife, and re-examining health care — each of which is a mammoth global challenge. Collectively, our Dwight ambassadors brought a lion’s share of innovative thinking and leadership to these important dialogues. We're extremely proud of all Dwight GIN teams and applaud them for their efforts to ensure a brighter future for all!