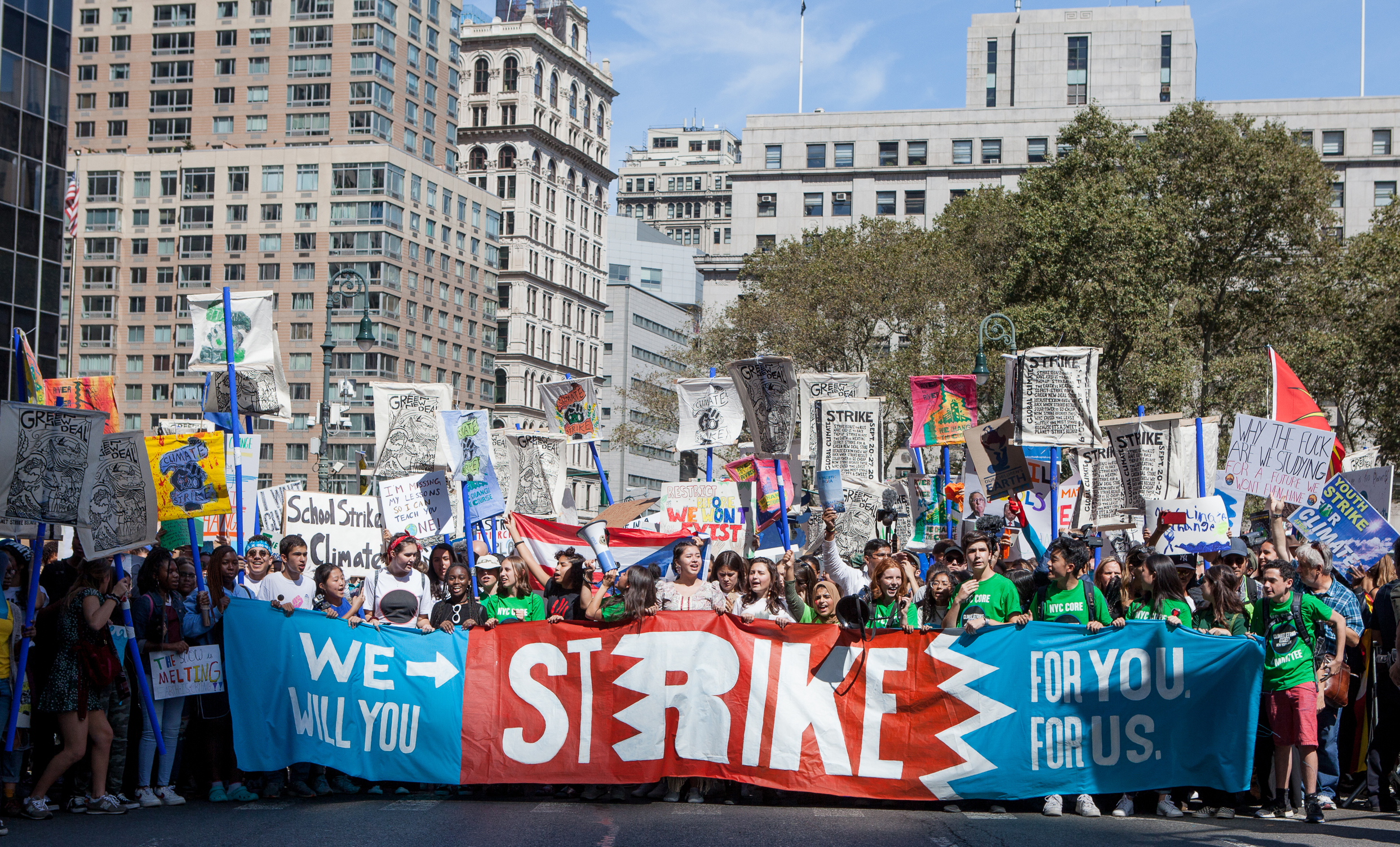 “It felt so empowering to be marching down the streets of New York City with 315,000 people behind us!”

Juniors Calvin Yang and Alessandro Dal Bon were on the front lines of the Global Climate Strike in New York last Friday, helping to carry the first banner and lead the largest turnout of fellow activists in the worldwide protest. Originally expecting 10,000 participants, the duo — two of 15 student Core Committee members of Fridays for Future NYC — had been dedicating their time and energy since July to organize the event and hoping for a successful turnout. They could not have imagined that the Manhattan protest would set the record for the global strikes, which collectively totaled four million participants!

It Only Takes One to Start a Movement
Fridays for Future was founded by 16-year-old Swedish climate activist Greta Thunberg, the powerful voice and galvanizing force of the mostly youth movement that is calling for immediate action to protect our planet, ecosystems, endangered species, and the future for a generation that sees them all in great peril. Calvin and Alessandro are among the millions Greta has inspired — and were among local teenage activists, including Pada Schaffner ’20 — who greeted her upon arrival in New York in late August. Two weeks prior, she boarded a solar-powered boat in the UK to reduce emissions from air travel.

Fridays for Future Comes to Dwight
Alessandro and Calvin launched Fridays for Future at Dwight, and together with Carolina Bueno Silva Arap ’22 and Pada serving as class representatives for grades 9-10 and 11-12, respectfully, rallied fellow classmates around the cause. They forged a large Dwight community in support of the exploding grassroots effort.

Balancing activism and academics isn’t always easy, as Pada, who helped lead Dwight students’ participation in the climate demonstration last March, shared with The Huffington Post: “It can be hard to convince a classmate that going to a strike is more important than turning in whatever they have due Friday, but overall I think this generation does realize how important this issue is, specifically to us.”

Indeed, the issue is of paramount importance to Generation Z, who are more vocal than their predecessors, and more inclined to take action for causes they believe in — against climate change and gun violence and for LGBTQ rights, among others. Before coming to Dwight, Calvin lived in Canada, where he became concerned about the environmental impact of a new pipeline, prompting him to start an NGO called Climate Youth Canada/Les Jeunes des Climat Canada in Toronto. He told Greenpeace, “As members of Generation Z, we are going to be the first generation that is really going to experience the full impact of climate change .... [propelling] me to strike for climate change, for my own future, and the future of everyone.”

Joining Forces by Joining the Core Committee
Last summer Calvin and Alessandro volunteered to be on the Core Committee of Fridays for Future NYC, working with fellow students, on a litany of organizational and logistical issues, ranging from requesting permits and working with the NYPD to planning workshops to create protest signs — all of which constituted a crash course in civic leadership.

Additionally, they took the helm in raising awareness for the September 20th strike, with Alessandro focused on social media and Calvin on traditional media. Their efforts were significant, and as the countdown to the global event was underway, they were increasingly in the red-hot spotlight themselves.

In addition to TIME and The Huffington Post referenced above, outlets around the world have included Alessandro and Calvin in their coverage, including three that visited them on Dwight’s campus: CNN’s Great Big Story; Italy’s RAI; and Japan’s NHK. The latter filmed a roundtable discussion they had with Pada, Carolina; juniors Matthew Armstrong, Sophie Velichko, Michaela Gary, Apolline Marcel, Jordan Sotomayor; and Eric Dale, Head of Upper School.

Calls for Action
At events leading up to the strike, including a rally in front of the UN with Greta, Bloomberg asked students what kinds of change they want to see. Alessandro called for a comprehensive bipartisan bill taking real action regarding the climate crisis. Calvin said: “The world needs to adopt a business-sensical, yet ambitious program to stop climate change. That includes implementing a cap-and-trade program or a carbon tax in America. Next steps? Global cooperation. We need to help developing nations and third-world countries to actually adopt renewable energy. The Western World needs to invest in the future of these countries.”

Core Committee members also attended CNN’s “Democratic Presidential Town Hall: The Climate Crisis” on September 4, hoping to participate by asking candidates questions. As they’re not yet of voting age, the students were unable to do so. Their frustration echoed the same feeling among many teenagers who are looking to the future — their future — and seeing an absence of sufficient adult action and near-silence in the face of scientific data. They see legislators, politicians, business and world leaders failing to address the urgency.

Rather than be defeated, young activists are doubling down, rallying, striking, and educating adults about these important issues, including parents. Alessandro spoke to this when, a cameraman from CNN Great Big Story followed him on September 20th from home to school and to the strike:

“I’m happy about today because I know I’m going to get out there and be on the streets, we’re going to be there striking for what we believe in, and that we’re going to save our planet … My family is really happy with my activism and with everything I’m doing. Knowing that I have my parents’ support is really important for me. They are learning about this just the way I am … I do think actions like these force people to listen. If there are so many people involved in a movement and speaking for what they believe in, then the politicians will be forced to listen.”

Embodying IB and Dwight Values
Dwight is dedicated to educating global leaders who can help make our world a better place and student activism around this issue, and numerous others, certainly brings that mission to light and life. Mr. Dale amplifies this point, “As an IB school, we encourage students to consider ‘service as action’ — the idea that people can serve their communities in action-oriented ways. While I wish that Dwight students could learn all they can in class, there are certain learning opportunities that teachers are physically unable to manufacture for the classroom. Here in New York, we are so fortunate to live and learn in an epicenter of important international events, culture, and conversation. It’s my belief that providing opportunities for students to use their voices and effect change in the world is an integral part of being a Dwight student.”

While Dwight students of all ages rallied around the cause, 170 Upper School students left campus and marched together. They were joined by faculty members, friends, and family. Across the pond, their peers at Dwight School London did the same.

“It has been wonderful to see Dwight students taking the lead in this important conversation all on their own,” said Mr. Dale. “Many people see climate change as a political or partisan issue; protecting the planet is collective human responsibility. How one interprets and acts on that responsibility can result in particular political or partisan stances and processes, but advocating for clean air and water, reducing waste, and promoting the use of sustainable energy are simply responsibilities we should all undertake as good citizens of this planet. I personally value and advocate for civic engagement.”

What’s Next?
As Alessandro told Fox5 NY before the strike: “We have our statement and demands: we want no more fossil fuels, we want to hold polluters accountable, and we want a just transition to a green economy.” Until that time comes, Calvin, along with many other Dwight students, will continue as climate activists. Another strike in New York is already in the works, with the date as yet to be announced.

“We have to keep on fighting and do more and more because our voices are being heard now. We have to make sure that they continue to be heard,” Calvin asserts.

With youth voices echoing across the globe, change is coming no matter what; hopefully, change for the better.