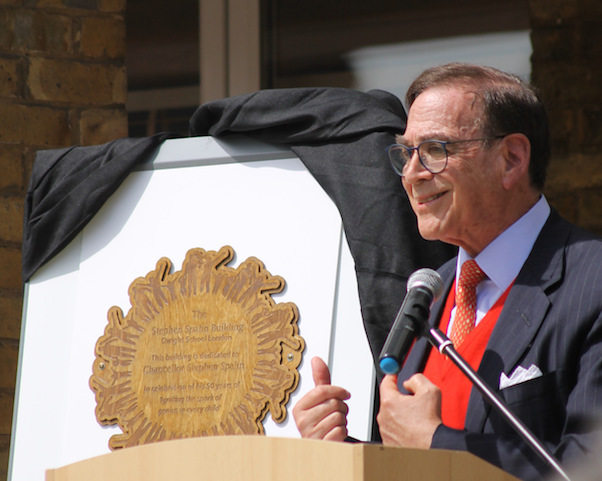 It was a bright, sunny spring day and Dwight School London was abuzz because Chancellor Stephen Spahn was visiting from New York.

It was a bright, sunny spring day and Dwight School London was abuzz because Chancellor Stephen Spahn was visiting from New York. Students, faculty, parents — and even local dignitaries, including the Deputy Mayor of Barnet, Caroline Stock — were gathering for a special ceremony: the naming of a building in his honor.

Dwight School London was the first overseas campus to be established in our global network more than four decades ago. Located today in the North London borough of Barnet, the school is one of the UK's leading IB World Schools and among just a few offering the continuum, from Primary Years through to the Diploma Program.

The man whose prescient vision to bridge boundaries decades before globalization took its deep hold was, of course, Chancellor Spahn. He was inspired to do so while studying at Oxford University by leading educators of their day, as he shared during the dedication of the building on Friern Barnet Road:

Thank you for being part of this wonderful celebration. It is, indeed, an honor for me.

Not long after I became Headmaster in New York in the late 1960s, I knew the time had come to reach across borders to establish an Anglo-American partnership. In so doing, Dwight became the first independent school in the U.S. to establish a campus abroad. Our school was housed originally at the Working Men's College on Crowndale Road.

It was an exciting time on both sides of the Atlantic, and it wasn't long before Dwight in London became one of the first 50 schools in the world to join the International Baccalaureate in 1978-79.

Over the last 46 years, Dwight has blossomed in London and found its home here, deepening our Anglo-American partnership and our shared commitment to a common credo: igniting the spark of genius in every child to build a better world.

Our students have become part of one global Dwight family, crisscrossing the pond in exchange programs, forging friendships, and collaborating in exciting and creative ways through music and the arts.

Together, we are working on the frontier and sharing innovative programs to transform education for new generations of Dwight graduates. It is a very exciting time, which I call the age of educational enlightenment.

I have a special appreciation for, and owe a debt of gratitude to, two men I met while a graduate student at Oxford. First is Alec Peterson, who was Oxford's Head of Education and the Founder of the IB. And second, Sir Maurice Bowra, Warden of Wadham College.

As the world was becoming more globalized, Alec Peterson taught me the definition of a great education in the new era: A well-educated person, if relocated anywhere in the world, would survive, thrive, and prosper while making a contribution to that community.

Another Englishman, Ralph Townley, who was a project officer with the United Nations Special Fund (UN Development Program), whom I had the privilege of working under prior to Oxford, taught me that collaborative efforts across borders could eradicate poverty and misery.

Under Chancellor Spahn's leadership, numerous collaborative efforts across borders and across Dwight campuses have been launched, preparing students to become global leaders who can make the world a better place.

During the dedication ceremony, which included musical and dramatic performances by students, Chancellor Spahn was asked to unveil the building plaque commemorating his 50th anniversary in education. A tour of the school followed, including visits to the PYP Personal Project Exhibition and numerous classrooms, where Chancellor Spahn spoke with students about their work and sparks of genius. The day came to a close with an al fresco party and toasts to the next 50 years!