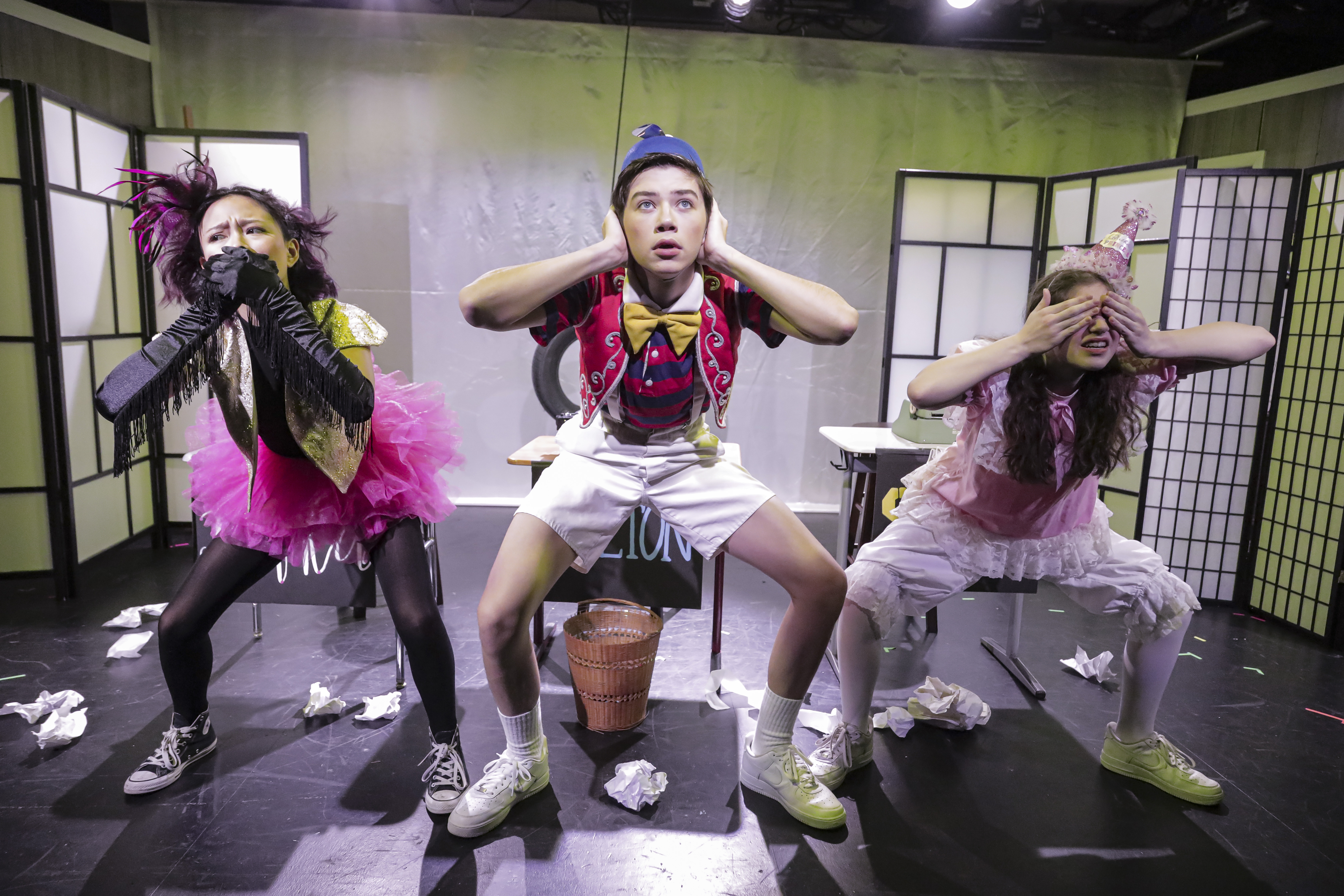 As the audience took their seats in Dwight’s Performing Arts Center, they also took in a slideshow of images, ranging from typewriters and records, to photos of famous writers, directors, and actors from days gone by.

The visuals transported the audience back in time with cultural references that became clear with the unfolding of All in the Timing and Amateurs. Both plays were on the marquis for our Fall Mainstage Theater production, and bringing them together simultaneously was no small feat!

To do so, Terry Christgau, Head of Upper School Theater Productions and the Master Theater Program, turned to former faculty member and trusted colleague, Colleen Durham, for her expertise. She directed All in the Timing; Mr. Christgau directed Amateurs — and together, they set the bar quite high for all.

“Doing two shows is harder for us older folks, but our students are hungry for this kind of experience and they make it worth it,” reports Mr. Christgau, who shared more in his program notes: “There have been real struggles along the way, as there always are, and sometimes those challenges seem overwhelming. It is a testament to the students’ talent and dedication that we have these two comedies to present to our community.”

All in the Timing

A collection of six one-act plays by David Ives, All in the Timing explores big themes — language, meaning, time, and place — all with a great deal of intelligence, a bit of absurdity, and lots of wit. The sketches are peppered with clever wordplay, literary references, and existential ruminations about life. Performed beautifully by an ensemble of mostly tenth-grade actors, All in the Timing proved to be true to its name; each mini-comedy was perfectly calibrated.

“Comedy is, in many ways, harder than drama for the actor because it is as technical as it is emotional,” says Mr. Christgau. “Instinct is not enough to perform comedy successfully; lots of technique is required, lots of repetition is a must, and timing really is everything. From diction to the ‘music’ of a particular show and writer, students learned how to be ‘in’ their parts, while still satisfying the demands of technique so that the audience gets what they came for.”

Students were most definitely “in their parts!” From embodying the movements and echoing the sounds of chimpanzees charged with writing Hamlet in “Words, Words, Words,” to dancing a parody in “Philip Glass Buys a Loaf of Bread,” our thespians’ hard work paid off, leaving the house in stitches!

Following intermission, the audience was transported into the living room of a cozy suburban home with wood-paneled walls and mid-century furnishings, where a couple is preparing to host a cast party. It is opening night for a musical about undertakers performed by the Timberly Troupers’ community theater company. This gathering is not the A-list affair happening across town; rather, it brings together an odd group of actors and friends, including a ventriloquist and his dummy. One guest is a noted theater critic who normally wouldn’t review a local (read: amateur) production, but does so as a favor to his old friend, the hostess. When he is ushered out mid-party for a medical emergency, his critical take — a pan — is left behind for the group to discover.

A talented cast of students in grades 11 and 12 took on these quirky characters with gusto in playwright Tom Griffin’s comedy, which melds absurdity, irony, and humor with underlying tensions and bitter truths. Directed by Mr. Christgau, who also designed the set, the play shares some references with All in the Timing, which made the choice ideal.

Work on both shows began in early October. As the performances drew closer, the actors, behind-the-scenes student crew, and adult production team dedicated increasing amounts of time and energy after school and all weekend prior to perfect every aspect of what the audience saw on stage ... and the magic of what they didn’t behind the scenes. The result was two thumbs’ up — times two!