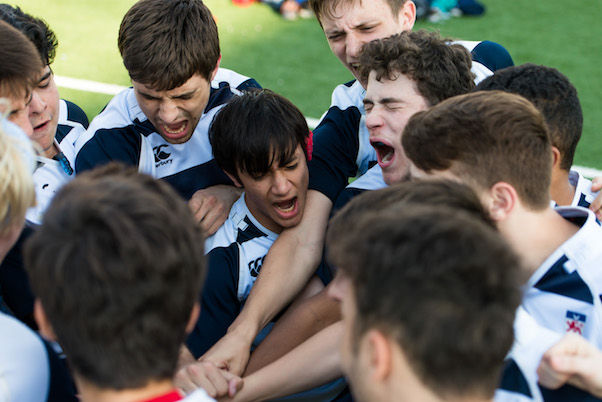 Our 2017-18 athletic year ended on a high a note — just as it began! We’re proud of our Dwight Lions’ successes on the field, pitch, and track, and take special pride in the skills they exemplify within and beyond those arenas — collaboration, leadership, integrity, and dedication.

Our Spring teams claimed a number of impressive accomplishments:

Rugby coach Heidi Rubenstein-Brethel shares, “With ten seniors on the team this year, the end of the season was bittersweet. Those guys helped shape the culture of rugby at Dwight and their presence will be sorely missed. With several rising freshman already interested, we’re excited about the future of Dwight Rugby!” She adds that several players won’t be packing away their gear for the summer, since they qualified to compete on the Met NYC All-Star Team, which Ms. Rubenstein-Brethel also coaches. She reports, “I am proud that Callum Gordon ‘18 and James Jones ‘18 made the Varsity squad and Ven Cernjul ‘20 and Duncan Bril ‘20 will be playing on the JV squad.”

Varsity Baseball coach Ted Belcher reports, “This team proved how much hard work is required for a successful season. Our graduating senior, George Cho ‘18, exemplified the words of Babe Ruth: ‘It’s hard to beat a person who never gives up!’”

As the school year came to a close, scholar-athletes from all three seasons gathered with coaches and parents at the Varsity Athletic Banquet to celebrate another outstanding year, share memories, and present awards. Several students gave especially heartfelt speeches, thanking their coaches and parents for unceasing support and dedication.

One scholar-athlete and recent graduate of note is Gabriel Gendzier-Imperiali '18, who was the first and only Dwight student to have participated on four teams throughout the year, giving new meaning to “three-season athlete.” He was a valuable member of the Cross Country, Swimming, Rugby, and Track & Field teams.

We congratulate all scholar-athletes and coaches on tremendous success throughout our athletic program this year, with a record-breaking number of teams competing for championships and in State tournaments. We wish everyone a fun and active summer, and can’t wait to cheer on our Dwight Lions in the fall!