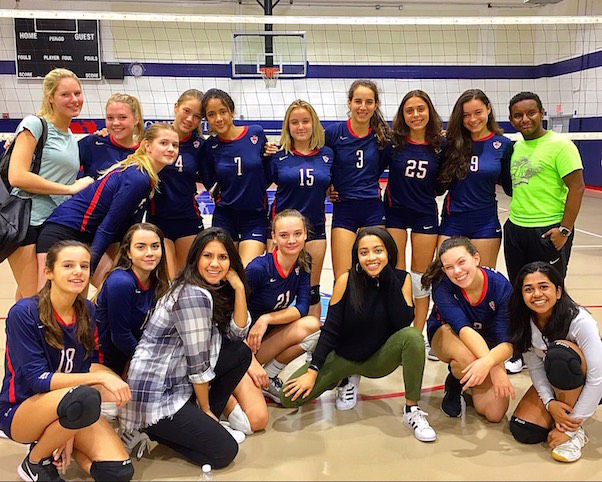 Dwight's Fall Scholar-Athletes Roar on the Pitch and Court!
Oct 5 2017

Our 2017-18 athletic year is off to a fantastic start! We're thrilled to cheer on brand new players and seasoned captains alike, as our Dwight Lions show off their skills and teamwork.

Our 2017-18 athletic year is off to a fantastic start. We're thrilled to cheer on brand new players and seasoned captains alike, as our Dwight Lions show off their skills and teamwork.

With a record of 7-5, the girls Varsity Volleyball team is cleaning up this fall! In their matchup against Garden School, they dominated each set for a decisive victory: 25-13, 25-15, 25-9.

When these girls hit the court, Annabel Happ '20 controls the offense with eagerness and precision, while Manuela Hissnauer '20 capitalizes on her sets to score. Mae Klein '19, Blythe Ruppel '18, Violet Prisk '19, and Apolline Marcel '21 place the ball in the opposing teams' weak spots, racking up points. Maria Berflein '20 and Anika Jeyaranjan '19 provide essential defensive plays. Senior and captain Jada Morgan supports her team through thick and thin with unceasing team spirit, which has been essential to a number of wins!

Show your support at their next game against Churchill School on Monday, October 16, at 4:30 pm, at the Dwight School Athletic Center!

The squad kicked off the fall season with a well-earned and exciting win over longtime-rival, Brooklyn Friends, who have held the number-one league spot for the past four years. With just six minutes left in the match, Lara Gardiner '18 made the winning goal, bringing the score to 2-1. It was a true team effort, as players created opportunities for each other and posted a tenacious defense.

This year's team is led by three seniors: Katya Shykind, Maya Schatsky, and Serena Korchak. Maxine Jamison '19 has given standout performances as goalkeeper; and Isabel Beiboer, an eighth grader who proudly made varsity, is currently the leading scorer.

They'll face off against Birch Wathen Lenox School on Monday, October 16, at 5 pm, at an away game. Come cheer them on!

When the Staten Island Academy Tigers faced off with our Lions, we emerged victorious! Victor Saquet '19 scored ten minutes into the second half, off of a beautiful pass from his older brother Carl Saquet '18 to make it a 1-0 game. Shortly after, SIA tied it up, but Dwight kept pressing, and with ten minutes left, Callum Gordon '18 passed to Victor, who put the game away with his second goal of the night! Goalkeeper Bruno Manfredi '20 had eight saves throughout the game — one of which clinched the win in the final four minutes. In a later match against French-American School, Manfredi topped his previous performance, making nine total saves.

Our squad has celebrated five wins so far this fall! Freshman duo Alex Goldenberg and Chase Stenberg lead in scoring and creating opportunities on the goal for their teammates. Alex Beiboer '20 is a returning player and acts as the team's guiding force. A special congratulations to Teddy Koutsos '20, who in a match against Grace Church, made all three goals for Dwight's decisive win!

Boasting victorious sets and great success with their overhead serves, our JV girls volleyball team has a lot to celebrate. A new player, Michaela Gary '21, scored six points in one set in her first game ever! Ninth graders Annabel Slifirski, Jeanne Rondot, and Sara Piao also showed great commitment and confidence on the court during their first competitive volleyball performances. Andie Valles Fons '21 scored eight points in a row during her serve at Staten Island Academy. Every girl is working hard and improving her skills and teamwork during practices and matches.

Come show your support for the girls JV Volleyball team as they take on Berkeley Carroll tomorrow, Friday, October 13, at 4 pm, at the Dwight School Athletic Center!

The Middle School girls squad won 5-3 against Brooklyn Friends! Each member of the team has been working hard on improving her individual offensive and defensive skills, and collaborating to create scoring opportunities for one another. Congratulations to Mathea Froeysa Lyngroth '22, Gine Grydeland '22, and Olivia Tajer '22 for standout performances on the field!