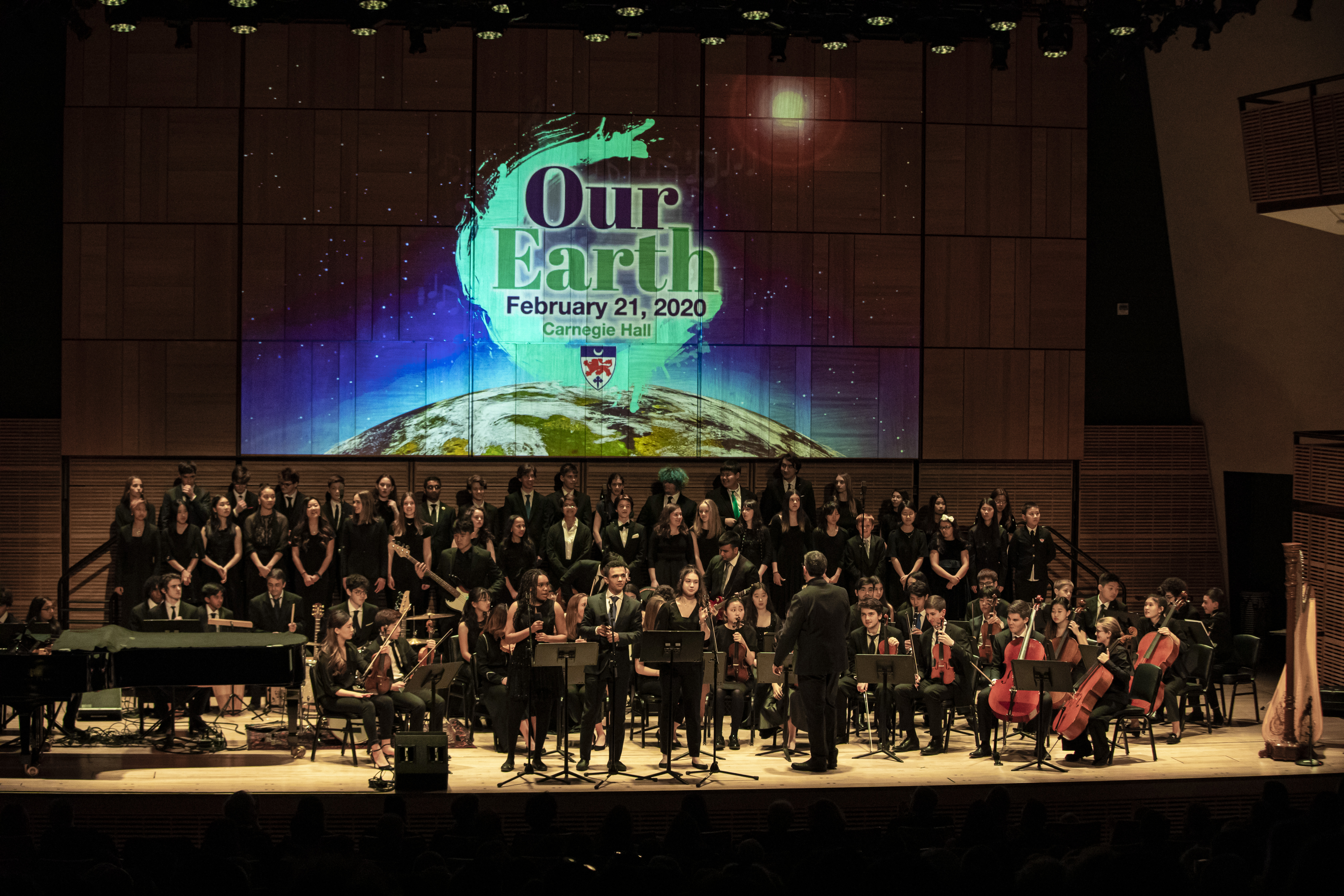 The Dwight Schools’ return to Carnegie Hall was a glorious musical reunion!

As the lights dimmed on the Zankel Hall stage, the lyrical sounds of the classic “Flower Duet” from the opera, Lakme, filled the air, setting the tone for what was to come: an evening in global harmony.

The concert was the culmination of a weeklong music festival in New York, which brought 150 students from around the world together to share their talents and passion for music. Last year, Dwight’s annual festival was hosted by our school in Shanghai for the first time; this year’s event reconnected many who participated in that collaboration alongside those new to this Dwight tradition. Unfortunately, we missed students from Shanghai who had planned to take part.

A Theme Comes to Life
The planning and preparation for our global music festivals begin many months in advance when the music directors of each school work together to map a cohesive program and students audition on their own campuses. This year’s theme was “Our Earth,” chosen to be a musical celebration of the beautiful world around us. It allowed all campuses to explore the vast array of music selections that highlight the natural world and throughout the concert, we heard many different musical styles celebrating earthly motifs, from the changing of the seasons, blooming of flowers, and power of the weather, to reflections on human life on earth.

Additionally, the theme brought Dwight’s global vision pillar to life. As Eric Novod, Head of Performing Arts in New York, shared in the Playbill, “This special concert is, quite literally, a representation of ‘our earth’ coordinated by music faculty and performed by students from campuses in New York, London, Seoul, Dubai, and online, representing dozens of countries that stretch around the world. Opportunities to experience this level of cultural and musical exchange are unique to our global community and everyone can be proud to be part of such a vibrant and harmonious family!”

Students from each campus performed pieces that showcased their impressive instrumental and vocal talents, and when everyone from The Dwight Schools was on stage together, they wowed us with combined artistry. Joining them were fifth-grade students from New York, who performed two vocal pieces and got their first taste of what it’s like to be part of this special event.

As the famous saying goes, “How do you get to Carnegie Hall? Practice. Practice. Practice.” Indeed! Each school convened many rehearsals on their home ground prior to arriving in New York, and the final touches were put on all performances in intensive rehearsals during the days leading up to the concert.

While lots of hard work goes into it, the week everyone spends in New York is an incomparable bonding experience. Students forge friendships and create memories through a shared love of music. Take a behind-the-scenes look at the camaraderie:

In addition to clocking many hours together in rehearsals with our global music faculty, students connected in the classroom, toured The Big Apple, and enjoyed some downtime by taking in a Broadway show.

The Big Night!
Before a single note was heard, Mr. Novod welcomed the audience, sharing, “The talent, character, teamwork, and passion displayed by students during the festival week have already made this unique Dwight experience a singular success.”

Then it was time for many musical sparks of genius to shine brightly, as students took us on a journey around the world. We heard pieces spanning genres, from classical and traditional folk Korean music to jazz, rock, pop ― and something new this year ― country with a reggae twist! That’s how the finale, “Take Me Home, Country Roads,” was described, and it was a rousing number that brought the audience to its feet!

Our Head of School, Dianne Drew, closed the program with notes of appreciation. But before the evening ended, there was something more in store: a surprise, gangnam-style! Following the announcement by Kevin Skeoch, Head of Dwight School Seoul, that next year’s music festival will be hosted in Seoul, a group of K-pop dancers brought the message home!