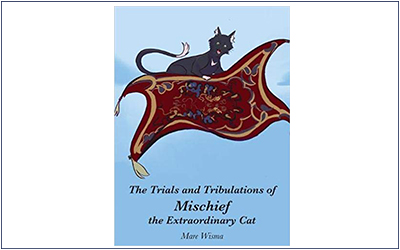 Writing under the pen name, Mare Wisma, she has published two feline-themed children's books, the latest entitled The Trials and Tribulations of Mischief, the Extraordinary Cat.

The book tells the tale of Mischief, an orphaned black cat living in a Middle Eastern hamlet. Adopted by a loving couple, who soon have a baby girl, he overcomes feelings of neglect and befriends the little one, amusing her with his antics. Living up to his name, though, Mischief gets into, well, mischief! Fleeing guard dogs and joining Bedouin nomads, we follow his trials and tribulations until … you’ll have to read the book to find out!

With beautiful illustrations by Bruno Cruz — who attended Dwight from grade 6 to 9! — the book is now available online through Amazon and Barnes and Noble.

Last year, Ms. Abdullah read her first book, The Cat with the Hemingway Paw, to Dwight third graders, who loved hearing about the tales of a commanding cat named Napoleon, and his brother, Ernest. She continues to conduct readings at schools, bookstores, and libraries, sharing her passion for literature with young readers. Ms. Abdullah’s third book, The Adventures of Hasar and the Canary, is scheduled to be published this spring. We can’t wait to see what kind of adventures her remarkable cats go on next!