Heidi Rubenstein-Brethel is busy! She serves as the Dean of Ninth Grade, Head of Physical Health Education, and coaches two Varsity teams — Girls Soccer and Boys Rugby, which she founded.

Heidi Rubenstein-Brethel is busy! She serves as the Dean of Ninth Grade, Head of Physical Health Education, and coaches two Varsity teams — Girls Soccer and Boys Rugby, which she founded. We sat down with Heidi to learn more about her multiple roles and how she inspires our students and scholar-athletes to succeed individually and as teammates in every aspect of their lives.

I like the challenge of maintaining a balance! Every day is different, bringing new opportunities and challenges. Time management is very important — and that's something I try to pass on to students. Some with the best time management skills are those who are the busiest. That certainly holds true for me.

Tell us about your own athletic career.

As a kid, I played soccer and softball primarily, and basketball and ran track, too. I was always playing something!

After graduating from high school, I found rugby. And from that point on, that was it. I played rugby throughout college and beyond in Baltimore, Austin, and New York City. I continued playing into adulthood with the New York Rugby Club and in a women's premier league, so I was fortunate to travel all over the country to compete. I was thrilled to be invited to try out for the U.S. women's national team. I didn't make the cut, but I did go to Barcelona for the 2002 World Cup to cheer on my friends!

What was your path to education and coaching?

I have worked with athletes, students, or peers, in some sort of leadership role for as long as I can remember. I ran after-school programs in college, worked at the YMCA, and worked as a personal trainer and sports performance specialist for elite athletes as a strength and conditioning coach. I think I always knew that I would end up in education, but for a time I was more focused on my own physical training and that of others. When I was looking at graduate schools, I realized that I could coach and train athletes, while also contributing to their educational life through physical and health education.

My professional career path is still evolving. This is my thirteenth year in education and my sixth at Dwight. Now that I have been a dean for three years, I feel that I'm most comfortable in that role. I enjoy the administrative and leadership responsibilities, and the pastoral duties that come with being a dean. I like contributing to students' academic, emotional, and social development and being able to help them be their best selves.

What is your educational philosophy?

I believe in a holistic education. A child's physical, mental, and social-emotional well-being are vital to learning, so all areas need to be nurtured. Students learn in so many different ways that educators have to connect first and get to the core of each individual to find out what motivates him/her. I think that the educator-student connection is everything; it fosters student buy-in, and with buy-in, you can create a positive culture for student success.

What is the value in kids playing sports?

There's a huge link between being a part of a team and life in general. On a team, you learn how to get along with people and communicate well. You learn how to win graciously and how to handle the hardship of losing. And that's life — you don't always win. You learn how to deal with adversity. These everyday lessons will benefit you as an adult. The skills that I learned directly translate to my job as a dean and allow me to act as a life coach for students.

What are the guiding principles for PHE at Dwight?

The PHE Department focuses on providing students with a fitness and health education that will serve them well throughout their life. Students are not only learning the skills they need to be proficient in a sport, but also the interpersonal and life skills they need to take responsibility for their own health and to work successfully with people, both one-on-one and in group scenarios. We encourage students to leave their comfort zone and take risks — in the spirit of the IB Learner Profile — to maximize personal growth and improve their performance.

What are some challenges ninth graders face and how do you help them navigate the transition to high school?

The biggest question at the beginning of the year is: How do we become a part of the high school community? Everything is different. There are more assessments, the expectations are higher, and this is the beginning of their path to college. Academics become more rigorous and their homework load is greater.

Each year, the overnight orientation trip to Frost Valley YMCA is a really important time for students to bond and start building their own community before they enter high school together. Some students say they can't imagine the first day of school without having shared that experience.

Throughout the year, we continue to build community and emphasize what it means to be in high school. We underscore the importance of social relationships, open communication with teachers, and time management. As a dean, I watch for patterns that could indicate struggle. There is no such thing as too much communication for me; everything builds a story and allows me to step in and find out where students might need more support.

Our Girls Varsity Soccer team won the ISAL Championship for the first time last year. Congrats! How did this season play out?

We graduated some great talent last year, but we had so many rising ninth grade stars on the team this year. We had three senior captains who felt the pressure to win again — they've been there before and know what that feels like. They wanted it! They did great, with two 5-0 wins leading up the to semi-finals. Our season ended at the semi-finals, with a loss in a well-fought match. They were disappointed, but I'm super proud of their fight!

If your players aren't disappointed after a loss, then you're not doing something right as a coach. There should be some emotion that shows that they care about all of the hours that they put in. And when they lose, I take it as hard as they do.

Teaching kids to be competitive — the mental part of the game — is the hardest thing to coach. It's important to motivate them to find that drive within themselves. Sure, you need the skills to play a sport well, but there have been many more games won by the athlete or team who wants it more. 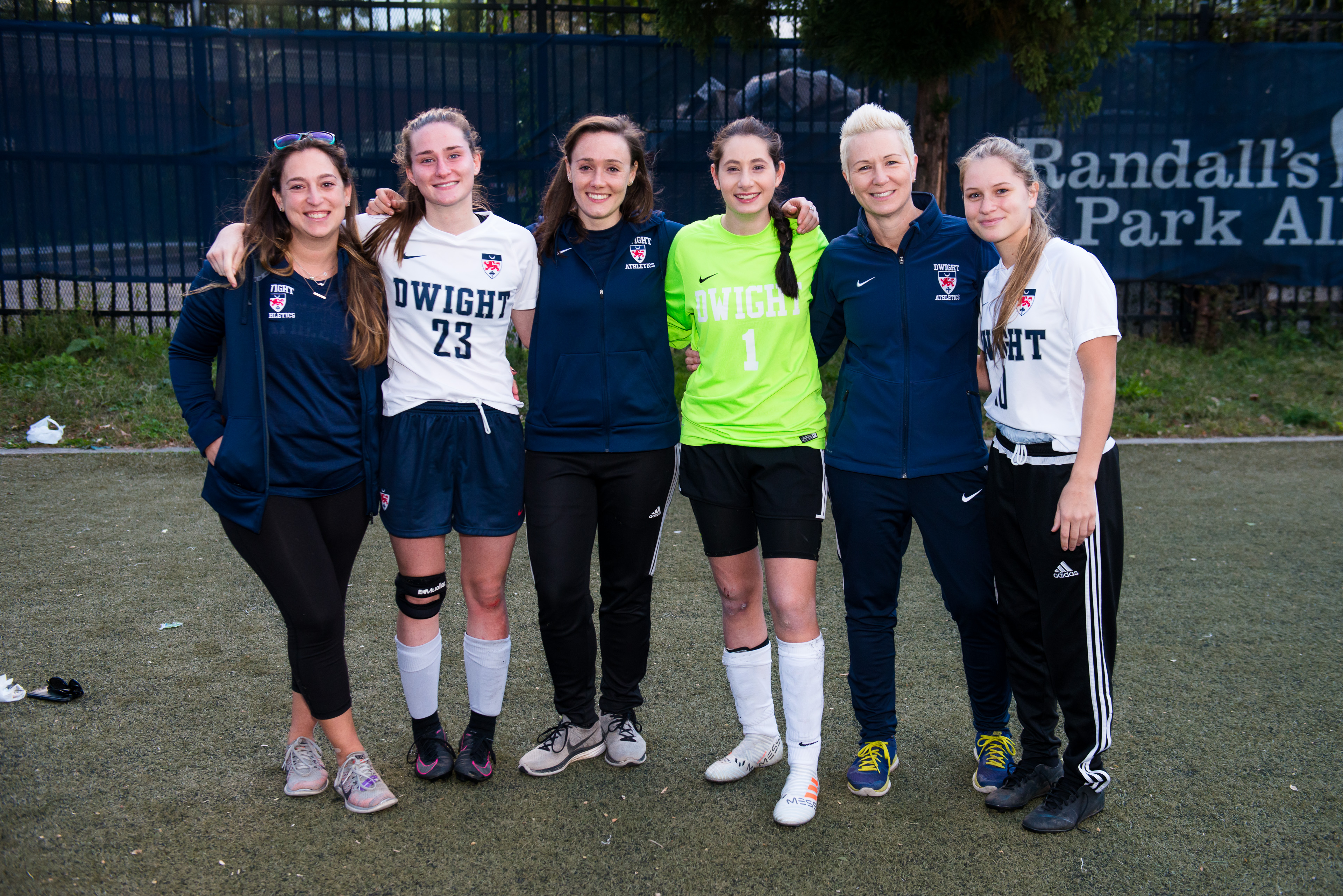 You founded the Varsity Rugby team at Dwight six years ago. Tell us about how it started.

A former student playing in the youth division of the New York Rugby Club, where I also played and coached for many years, approached me about wanting to play rugby for Dwight. Together we made it happen!

I was able to carry the rich history and culture of rugby over to Dwight and our team took off.

Rugby is a very physical sport — players tackle each other and get bloody together. There is a feeling of going into battle as a unit. We call the team a brotherhood and players embrace that culture and pass it down from year to year. We have our own special shirt that says "Earn It" on the back. Only players who have stepped onto the field with each other have that shirt and it's very special to them. 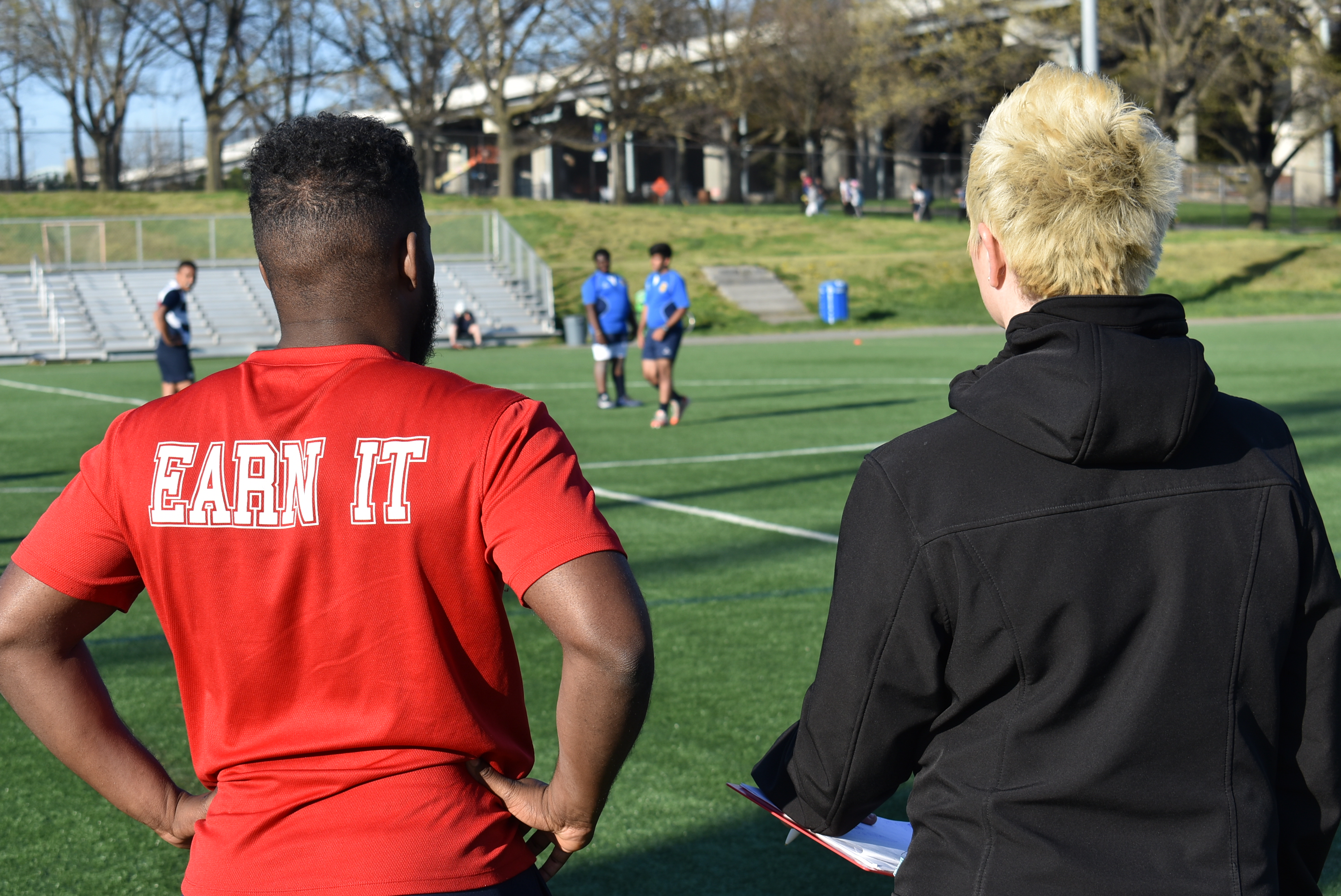 The first year, we recruited just enough players to make a team. This year, we'll have 23 on the roster and our first-ever pre-season trip to Ireland! The team will train with professional players, play matches against local teams of the same age, and do some sightseeing in Dublin, including a visit to the world-class Aviva Stadium.

I had a coach who told me that it takes at least five years to build a championship team. Of course, that's if you have the same people for five years. At a school, we see players graduate after four years or fewer if they come to the game later in their high school career, so it's a challenge, but one that I have enjoyed immensely. Those who graduated last year had been on the team for four years and we had the best record in our league for two years in a row. The boys were thrilled and it's a great standard to shoot for every year.

What is your personal spark of genius?

Coaching and being a mom!

You received a PD grant from The Dwight School Foundation. What was it for and how will you bring that learning back to campus?

I'm extremely excited to attend the Athlete Friendly Education Center Professional Development Workshop in Hong Kong next month! Dwight became the first school in the U.S. to be accredited by the World Academy of Sport as an Athlete Friendly Education Center this year, and I will be the first Dwight administrator to receive training from the Academy. I look forward to bringing back tons of knowledge to share and to continue enriching our long-standing scholar-athlete tradition here at Dwight.