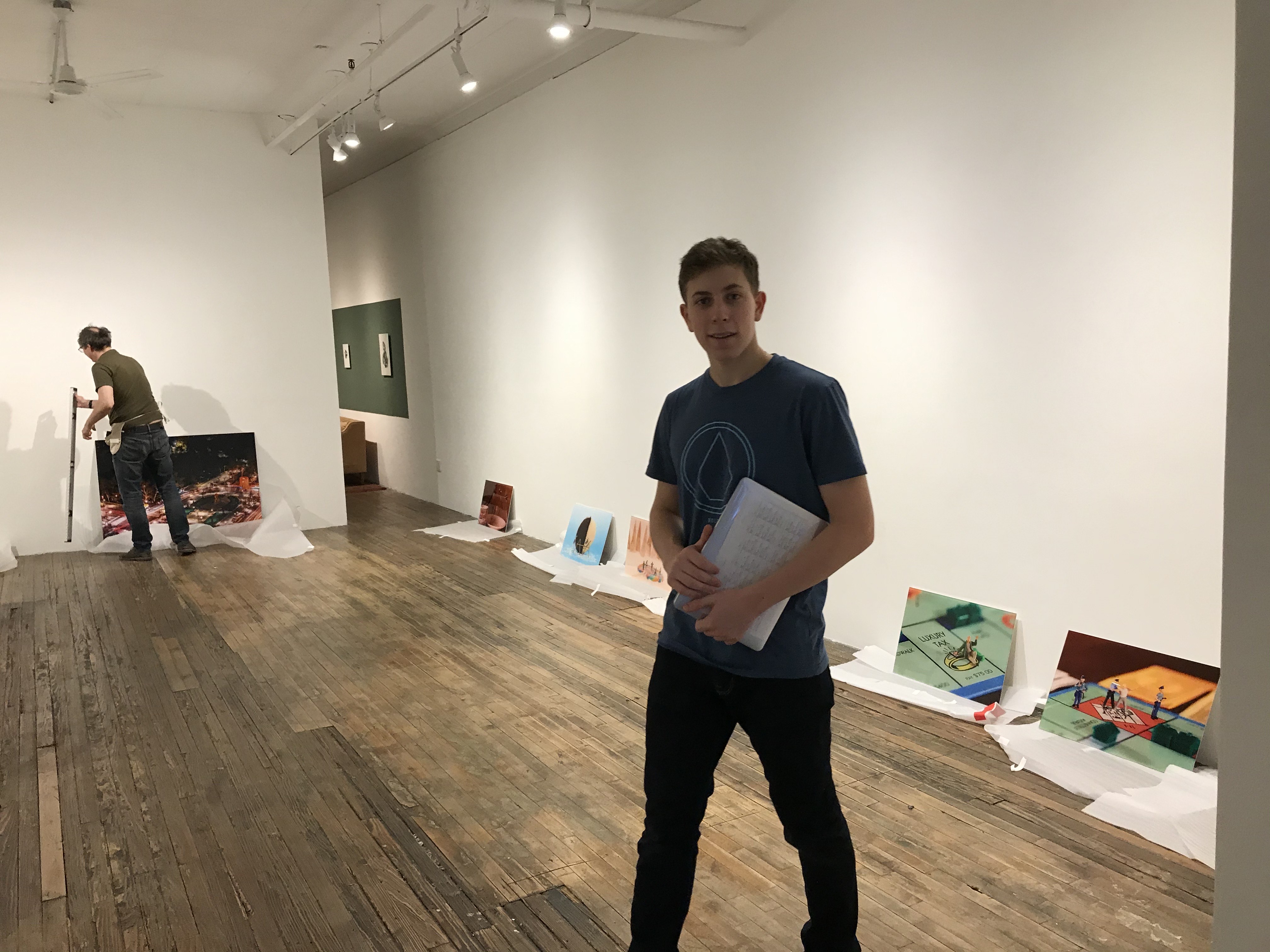 The works are from Jake’s “Sweet Series” of images, featuring miniature figures juxtaposed against treats, which appear to be lion-sized by comparison. These include a police officer who is inspecting the hole of a frosted doughnut and a hiker pondering a crowded path of Oreo cookies ahead. 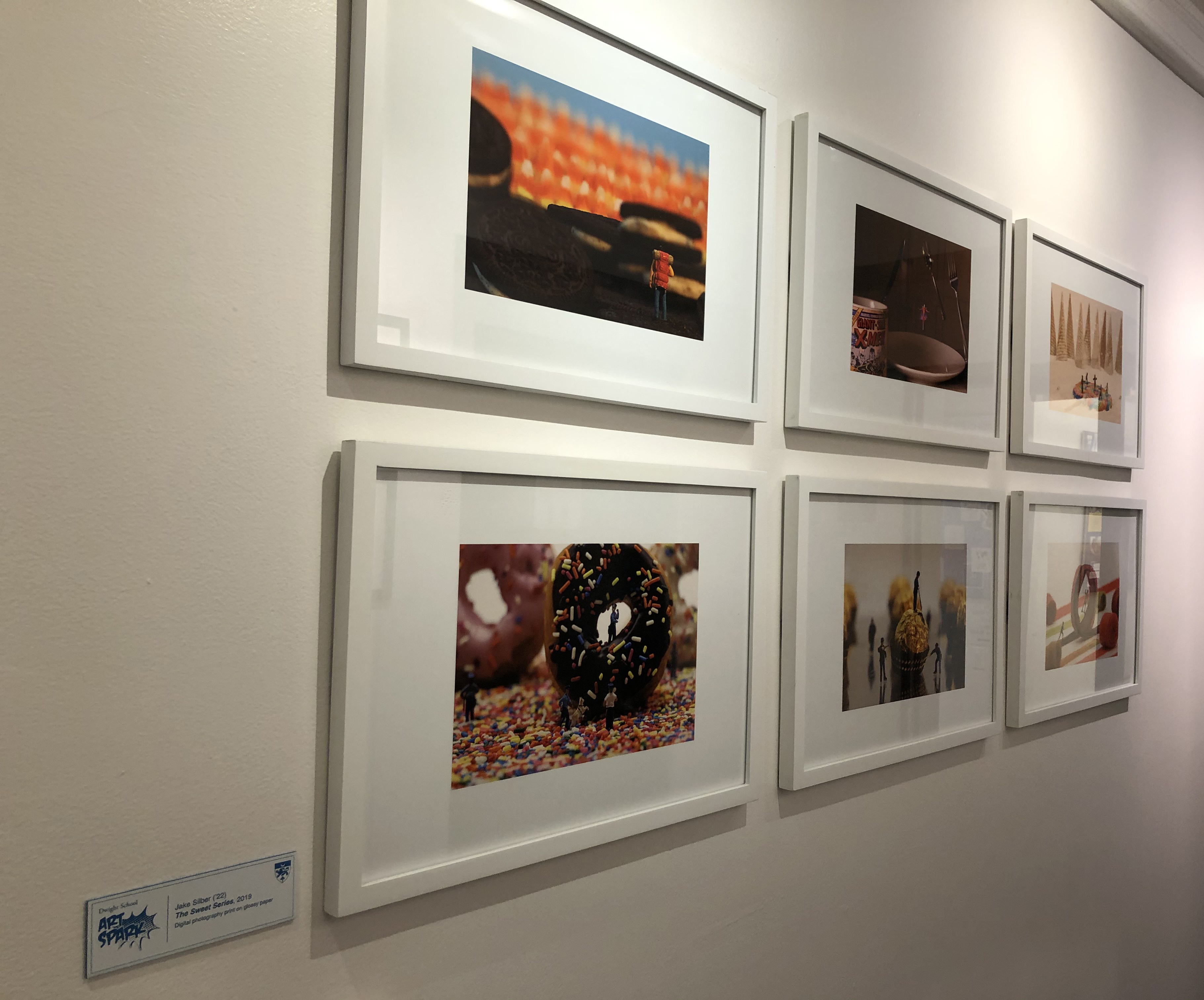 Jake began thinking about these images, which have also been showcased at our Art Exhibitions, in Dwight’s after-school Art Spark program under the mentorship of Justyn Ambrose, Head of Visual Arts. “Last year, Mr. Ambrose inspired me to brainstorm ideas for a project similar to the process of storyboarding,” Jake recalls. “I developed an idea, which I later realized had unconsciously been drawn from home, where we have a photo of a miniature person swimming in a watermelon. I had been looking at that image my whole life! I began my concept with a mini-hiker conquering candy corn mountains, which snowballed into the Sweet Series.”

This series also includes an image of mini-construction workers searching for marshmallows in a giant bowl of Lucky Charms; ice skaters gliding across a lollipop; and two billboard painters, each tackling one side of a black-and-white cookie. 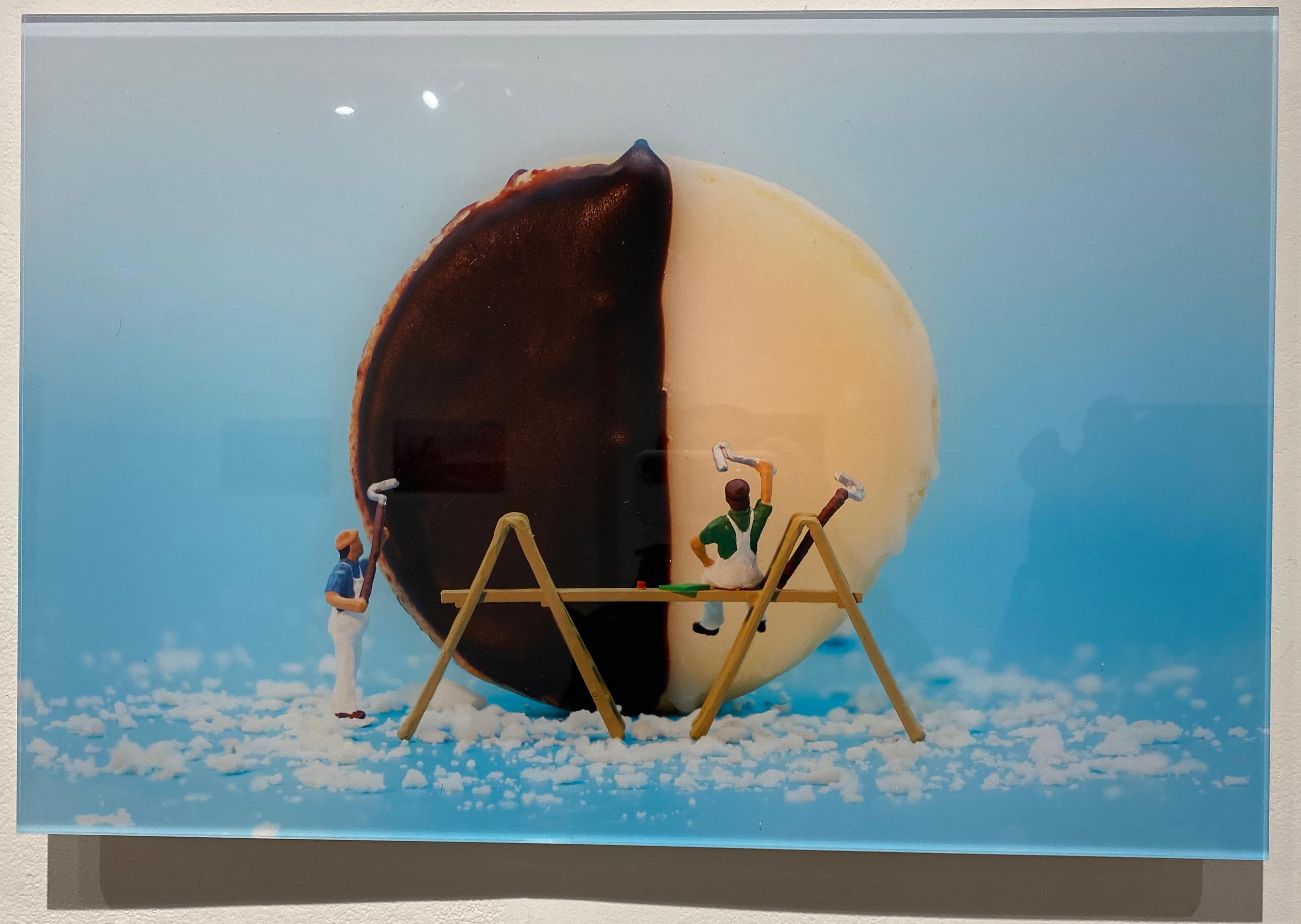 Jake also created a series of miniatures on a Monopoly board shown at last spring’s Art Exhibition, and a series of night-time street scenes called “Light Trails.” For the latter, Jake used a long shutter speed, capturing the trail of lights from moving vehicles over 3-30 seconds, creating striking streaked effects. He says, “I printed all of them in Art Spark, where I learned how to do so, and am also fortunate to have access to other equipment such as lighting and lightboxes.”

Crediting Mr. Ambrose, Jake shares, “He really gave me the push to pursue my photography on a deeper level, and his guidance has been so helpful. I wouldn’t have received this amount of personalized support and mentorship at any other school.”

An Eye for Visual Storytelling

The visual arts captured Jake’s attention at a young age and he began making his own stop-motion movies in fourth grade. He continued for four years before turning to photography, learning about the art form and experimenting with different techniques, which he has done in earnest since coming to Dwight last year. He chose Dwight, in large part, because of our IB digital media and design courses, after learning about them from his older brother, Max ’20.

“In ninth grade, we focused quite a bit on photography and short films; this year, we’ve been creating advertisements and commercials, and learning about different strategies for promoting products and other real-world digital media applications,” explains Jake, who’s excited to begin taking IB Diploma Program film courses next year. He looks forward to expanding his knowledge base and experience in telling stories through images.

A Gallery Show Is Just the Beginning!

Following our Fall Art Exhibition, enthusiastic family and friends wanted to buy some of Jake’s works, sparking the idea for a gallery showing. It didn’t take long before a rental space was found and Jake mounted his first solo show at the Foley Gallery on the Lower East Side!

“I enlarged my photos and printed them on plexiglass for the showing,” Jake explains. “It was so amazing to see them on the walls of the gallery — and even more exciting to sell a few of my pieces!”

It’s no surprise that Jake, who also fuels his passion with classes at the International Center for Photography, plans to pursue photography as a career: “Having a job where you can do something you really love is great and I hope to have that one day,” he says. And as new technologies emerge, Jake is excited to embrace them: “I hope to continue learning and being creative through my photos. Art influences imagination and can make anything possible.” Indeed it does!