“I love learning! No matter the subject, I always enjoy the intellectual process,” shares senior Kai Kelly, who is getting ready to finish her Dwight journey with fellow members of the Class of 2020.

She joined Dwight in fifth grade, and with each passing year embraced new challenges with a sense of wonder and enthusiasm that stem from her sheer love of learning.

Kai, who is passionate about science — biology most especially — has been taking IB Higher Level bio and chemistry courses, and wants to study biochem or molecular bio in college. She’s more than ready, having participated in the Johns Hopkins “Discover Hopkins” Pre-college Program in Physiology and Disease as a ninth grader and Columbia University’s Explorations in Genetics and Molecular Biology Program last year.

“My favorite thing about Dwight is the intellectual freedom that we have to pursue our interests. There is never a ‘no’ if you want to take a course,” says Kai. “I wanted to take Latin to learn how to understand and memorize medical terminology and though I was the only student interested, Dwight made it happen! Ms. Natalicchi (former World Languages teacher) taught me one-on-one for several years. The school catered to my interest and this level of personalization is amazing.” 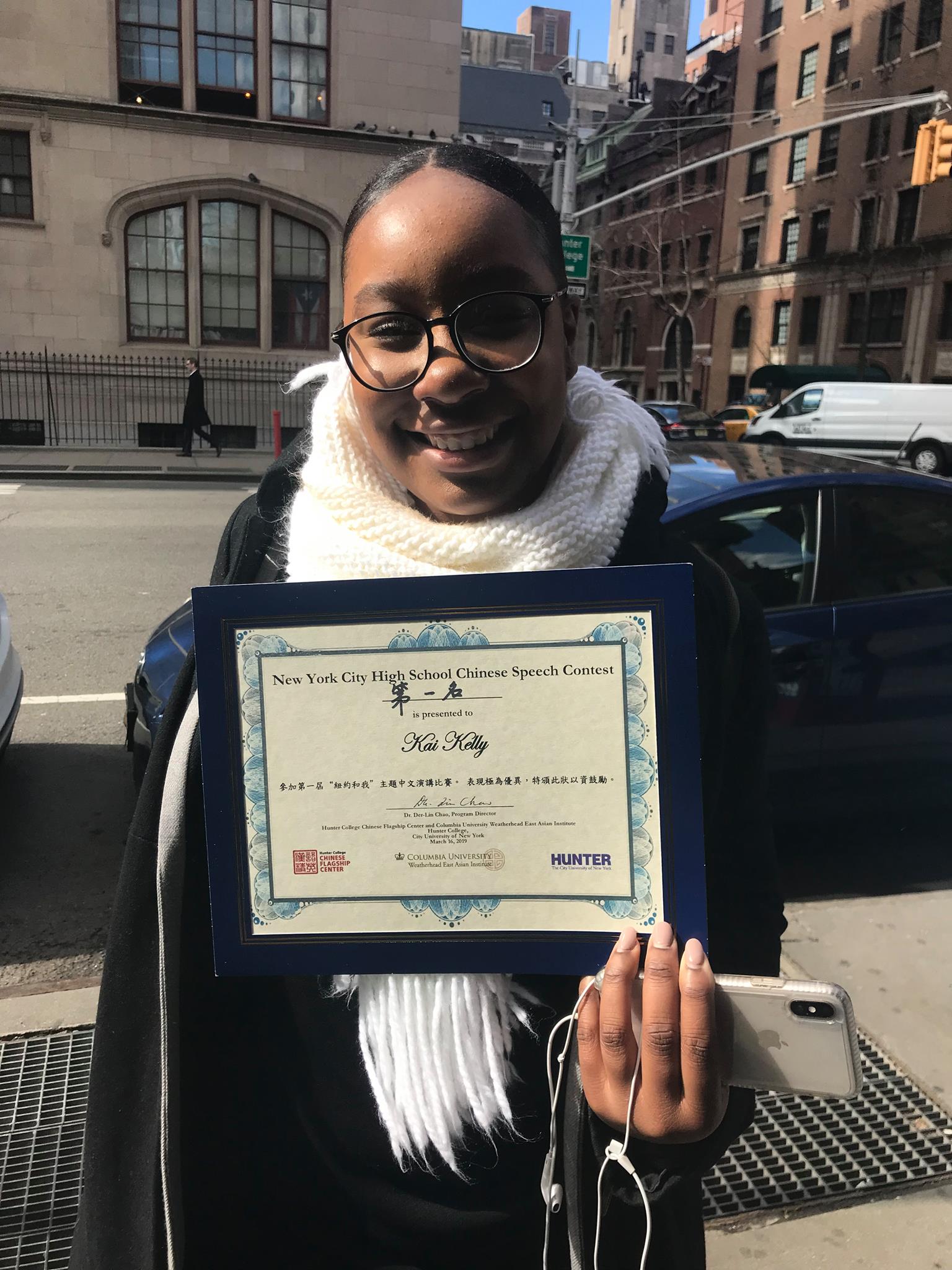 Excelling seems to come easily to Kai! Alongside academic successes, Kai is an accomplished singer, who discovered early on that she had raw talent when the conductor of her church choir gave her a solo. From there, she auditioned in sixth grade for the prestigious Young People’s Chorus of New York City, and has been working her way up the ranks, singing both alto and soprano, ever since. She takes voice lessons, including classical training in arias and operas. Between lessons and chorus rehearsals three times weekly — and on weekends — Kai is all in and loves it.

She was selected as one of 12 in her chorus of over 1,000 to perform at the World Holocaust Forum in Israel, commemorating the 75th anniversary of the liberation of Auschwitz-Birkenau last January. This was a very high honor for Kai and fellow choristers, as they were the only Americans invited to sing at the event, which drew world leaders. 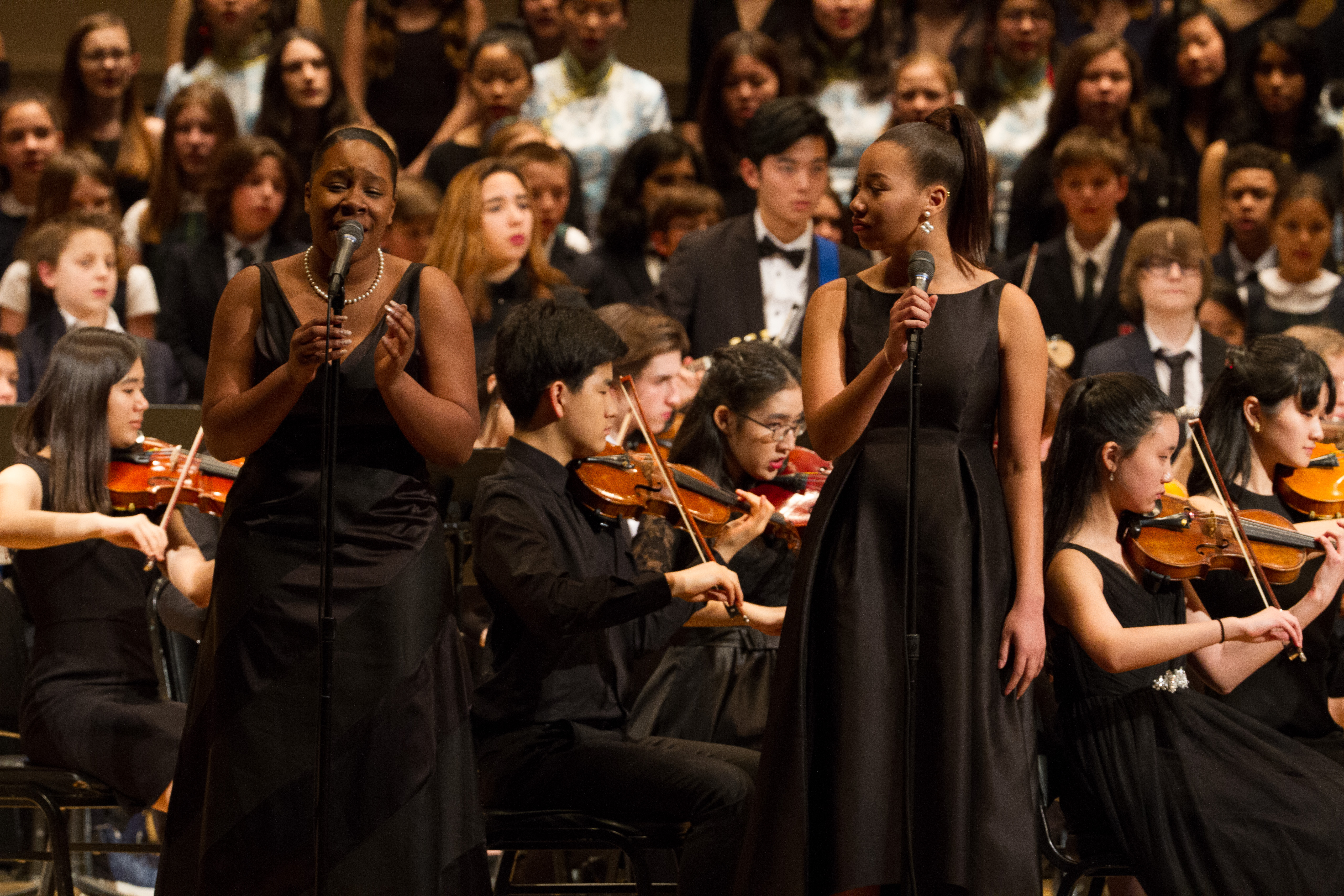 We’ve had the pleasure of hearing Kai sing on several occasions here in New York. “I performed a duet with Leah Payne ’20 at Carnegie Hall in 2018, which is my favorite memory of Dwight! I thought I would fall off the stage, which I didn’t, thankfully! The experience gave me the confidence to pursue solo opportunities in the Young People’s Chorus,” she recalls. Kai followed that with a solo performance of “The Greatest Love of All” at the Ziegfeld Ballroom during The Dwight School Foundation’s 2019 Spring Benefit. Earlier, she also performed across the pond at Dwight School London’s first Choral Extravaganza, where Kai reconnected with some of the buddies she met years before in our annual fifth-grade exchange program.

As Kai reflects on her years here, she says, “Dwight has given me confidence in myself academically and musically, countless opportunities to learn from others who each bring something different to the table, and premier showcases in which to share my interests and talents.” After pursuing her dual sparks of science and singing for eight years, Kai looks forward to seeing her younger sister, Quinn, who is a third grader, find her own sparks of genius at Dwight!