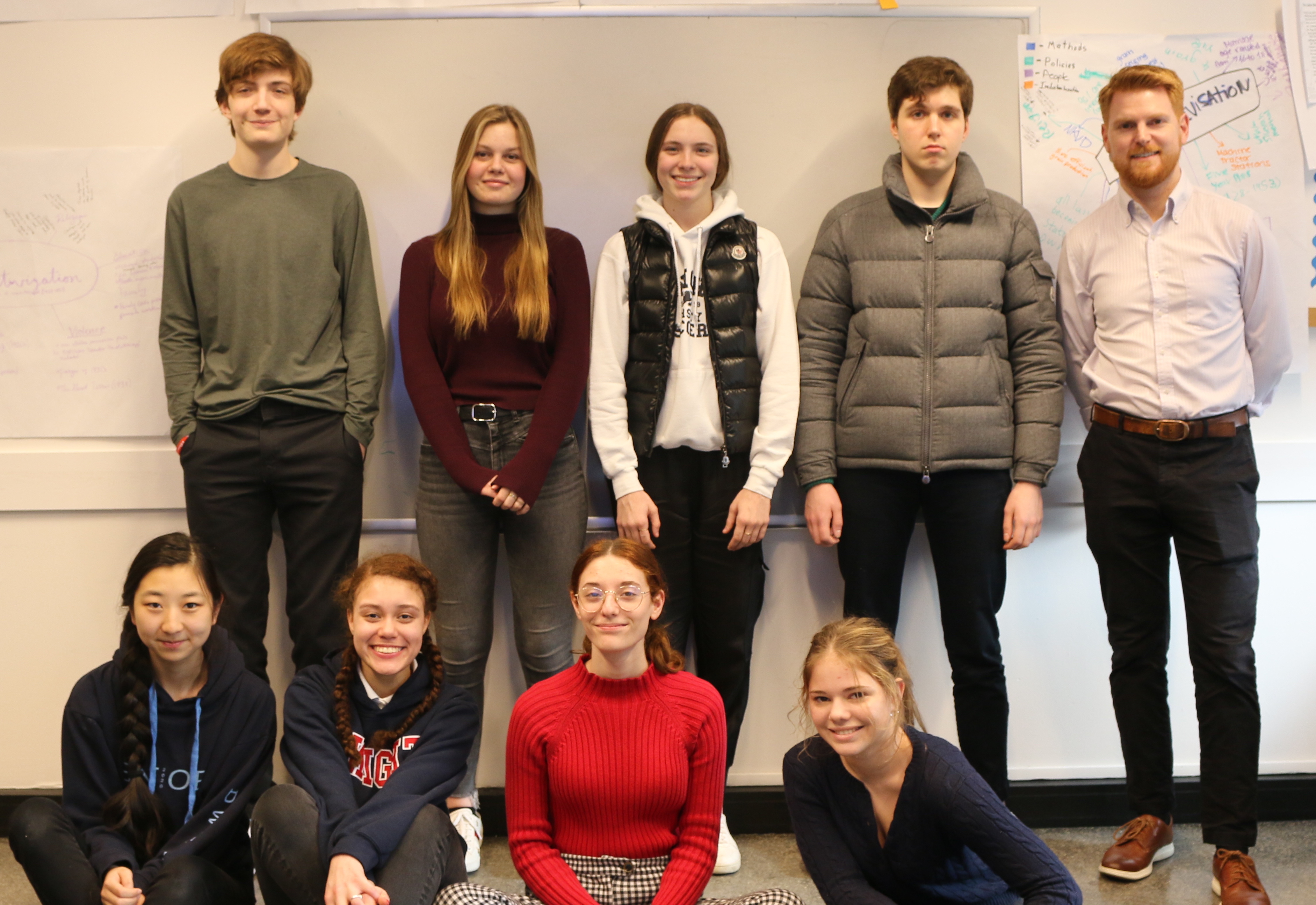 As 2019 came to a close, members of the Dwight Writers Club were not yet aware of a big surprise in the offing!

They were soon to receive word that they earned an “Excellent” ranking for the 2018-19 issue of Scintilla, Dwight’s literary magazine, from the National Council of Teachers of English.

Each year, the Council honors students’ creativity through a program called Recognizing Excellence in Art and Literary Magazines (REALM). It encourages all schools to develop literary magazines that celebrate the art and craft of writing.

Dwight’s literary history dates back to at least 1948. We found this reference to the founding of a club in the yearbook the following year:

Additionally, as those familiar with Dwight’s storied history know, Truman Capote ’43 was a graduate of The Franklin School, which later became the Anglo-American School and joined forces with Dwight in 1993. The legendary Mr. Capote demonstrated his writing spark of genius early on, with pieces published in the school’s literary journal, The Red and Blue. 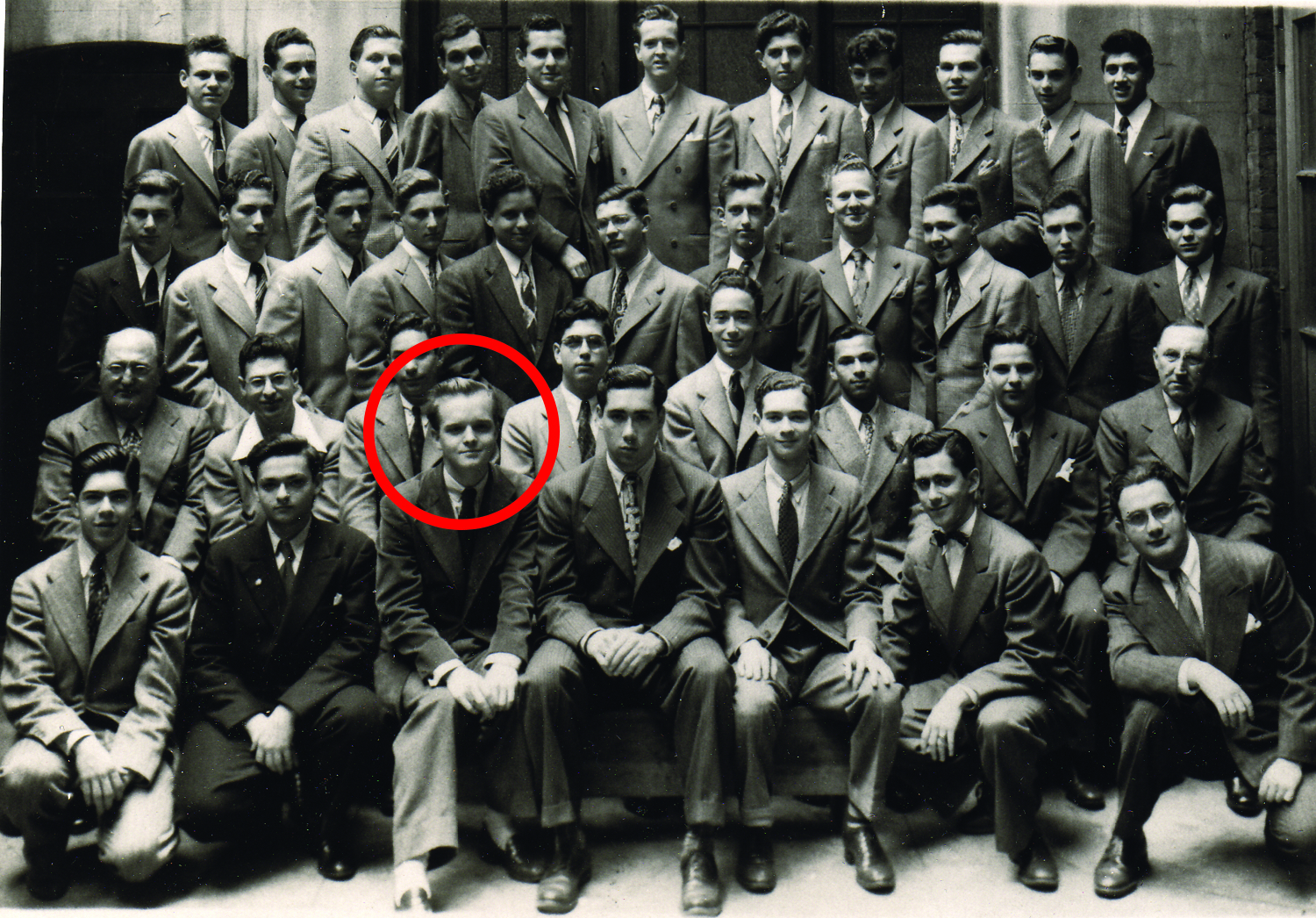 The 1941 Franklinite yearbook details the history of The Red and Blue, dating its launch back to 1899! 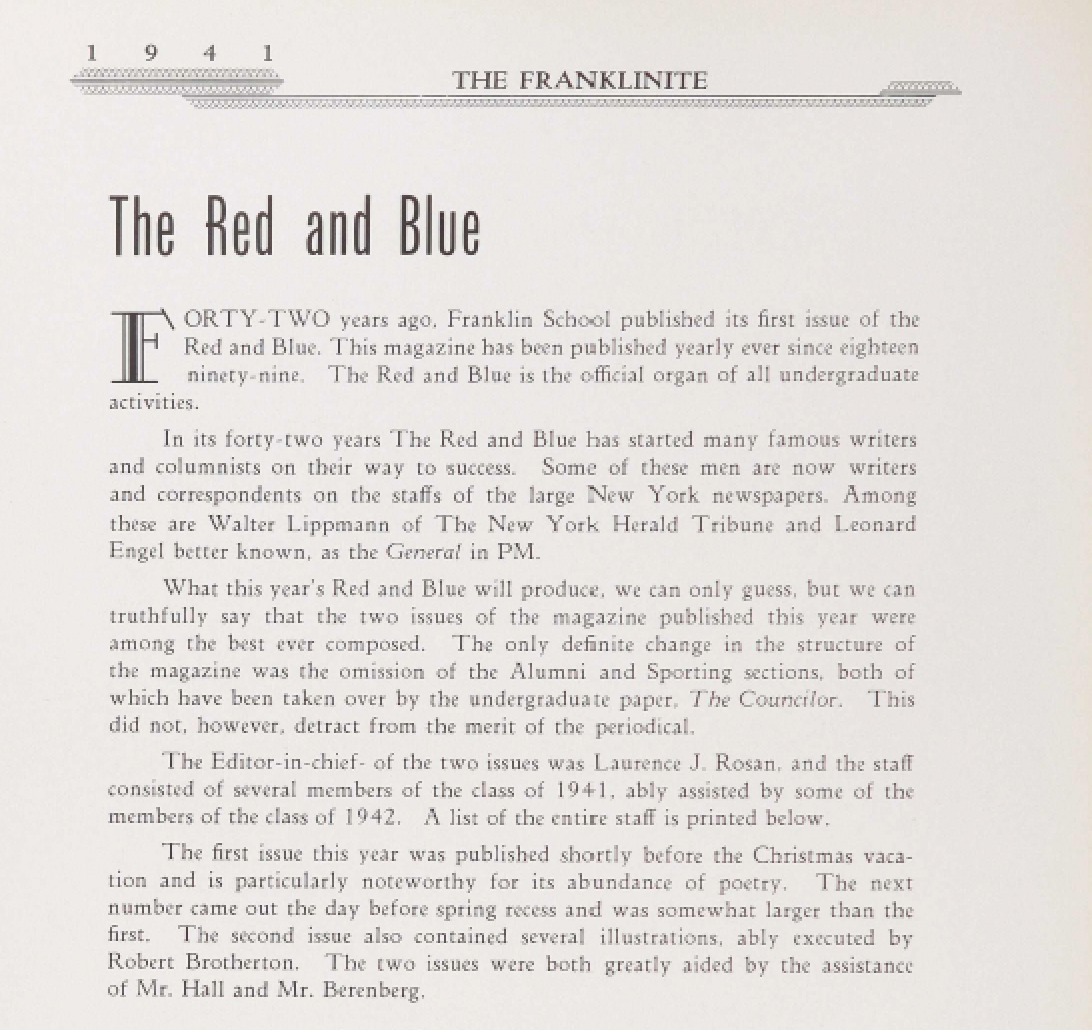 Of additional interest, the most celebrated Tony Award-winning producer and director in history, Hal Prince ’44, was also an illustrious graduate of Franklin. He credits Truman Capote’s great talent as the impetus to turn his own attention from writing to theater!

In addition to writing novels, short stories, and screenplays, Mr. Capote was also a playwright; imagine what they could have created had he and Mr. Prince teamed up!

Without further ado, we turn our attention back to Scintilla, which was published under different mastheads over time before its 2016 rechristening by the magazine’s then-faculty advisor, Beth Billard, Upper School English teacher, Personal Project Coordinator, and MYP Associate Coordinator.

From beginning to end, Scintilla takes Dwight Writers many months to produce. They spend the first trimester honing their skills through creative writing workshops; Mr. Ruelens and Club members select writing prompts, and students write and discuss their work together. Last year, one workshop was led by alumnus Maggie O’Hare ’18, who had contributed to the publication, and whose prolific artworks often adorned the magazine, as well as Dwight theater playbills and posters.

“We have a number of students like Maggie who have gone on to study creative writing and we’d love to have more old friends lead us again in the future!” Mr. Ruelens shares.

During trimester two, the call for student submissions goes out. The Club selects the pieces, edits them, and shares suggestions with writers. Once finalized, the written works are arranged with thematically related art and the layout is designed by students. Dwight’s Design Director, Emily Chase, provides some expert tips before the magazine goes to print.

Mr. Ruelens is pleased that the process is mostly student-driven: “My role in producing the magazine changes year to year depending on how experienced our Dwight Writers are. Each year, I try to make my role less prominent. I was so thrilled that I could wholeheartedly say that students did 100% of the layout and work for the 2018-19 issue submitted to the REALM Program; nothing was published without students having the final say. If Dwight had a printing press, I’d have them print it, too!”

This fully immersive creative writing experience is exactly what draws students. For Samantha Strauss ’22, now in her second year in the Club, shares, “My ninth grade English teacher, Ms. Katagiri, encouraged me to join since I love creative writing — I’m so glad that I did!” Natasha Girshin ’21 joined as a freshman, too, and is now enjoying her third year as part of Scintilla. “I love writing and wanted to be part of something bigger,” she explains. “I find writing with a group even more enjoyable than writing on my own. Being a part of the Dwight Writers is also a wonderful opportunity to dive into great writing units, from prose to poetry, and it’s a great outlet to share my ideas creatively.”

Chloe Liu ’20 has gained confidence through collaboration in the Club: “I wanted to share my writing and write with others. It’s scary to do so when you’re on your own; but when we write and share together, we’re more confident. We’re all in it together!”

Beyond Scintilla, Dwight Writers also host an annual Coffeehouse. This year, the gathering was bigger than ever — they teamed up with performing arts students to host the event in our Performing Arts Center. Natasha says, “Our Coffeehouse this year was totally student-led. The joint event was so much fun — I wish we could do it again throughout the year!”

With the fifth issue of Scintilla underway, Dwight Writers are excited to read all the submissions and to try a new layout. Club members are also looking to next year’s horizon. “I’m excited to hopefully see the club grow,” Samantha shares. “I’ve heard that eighth graders and younger high school students have an interest and hope to see them all next year!”

We can’t wait to read this year’s issue of the now award-winning Scintilla and extend congratulations to one and all!