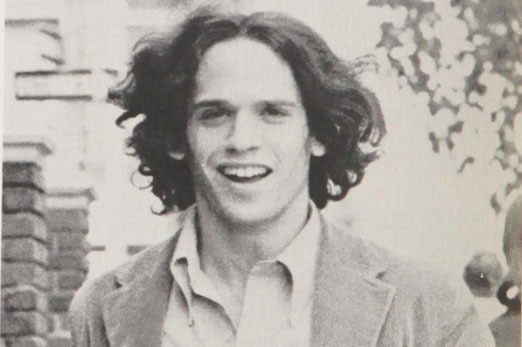 Growing up on 21st Street and Second Avenue, Bruce was both a scrappy and talented athlete. He took up baseball at the age of four, had a good arm, and was fast. By the age of 12, he had reached the height of 5'10 and dominated Little League and Pony League baseball games as both a pitcher and center fielder. The junior high school in his Gramercy Park neighborhood didn't have a team, so in sixth grade, he turned to softball and took up basketball.

Bruce enjoyed school but found the large class size of 40 plus students at JHS 104 less than conducive to learning, so he sought a smaller and more challenging alternative for high school. At that time, Dwight was located nearby on the East Side — at 402 East 67th Street — and offered what he was seeking, one-on-one teaching and the opportunity to play on multiple Varsity sports teams.

Bruce shares the story of encountering Chancellor Spahn for the first time: "When I came to meet with admissions, I was asked to go to the gym next door and wondered why because I was dressed for an interview. Lo and behold, Mr. Spahn was there, dressed as he always is — impeccably with a tie, suit jacket, and dress shoes. He asked me to hold his jacket, picked up a basketball, and started shooting. And shooting. And shooting. Not one ball hit anything but net. It was very intimidating and very beautiful to watch. I didn't know at the time that he was an All-American! After retrieving his jacket, Mr. Spahn threw me the ball and asked me to take some shots. I started shooting a little bit ... shooting a little bit more, and then he said, 'Okay, we're done. Let's go back upstairs ...' It's something that I will never forget! The end of the story, of course, is that I came to Dwight and played basketball."

The Varsity Boys Basketball Coach at the time, Hank Cadra '61, had played for Dwight and returned to lead the next generation on the hard court. "He was old-school and put us through our paces," Bruce reports. "When I went out for the team and arrived at practice with long hair, he told me that if I wanted to play, I had to cut my hair. I didn't want to but he took me and some other players to a barber shop. This was the beginning of the hard-core discipline we learned from Coach Cadra. If you want something badly enough, you do what it takes, like cutting your hair and running 1,000 laps to get into shape. At the beginning, I was not a starter, so I worked hard to earn a starting position a third of the way into freshman year." 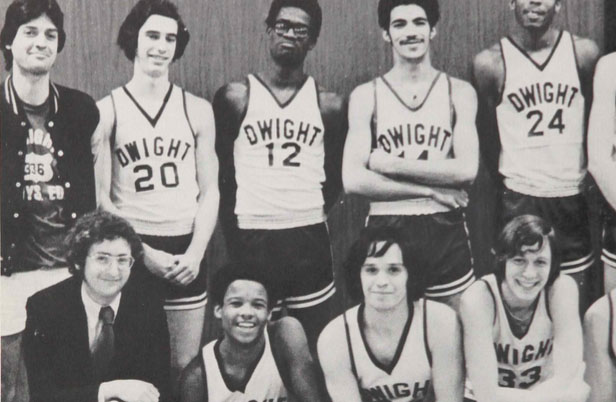 Bruce, a point guard, wore numbers 21 away and 22 at "home" —  a church basement next door —   where the team practiced two to three hours a day, five days a week. When school was closed for vacation, the players continued to practice without a break. Through discipline and hard work, Coach Cadra molded them into a gritty, determined squad.

During his first year, the team made it to the finals, but fell to Franklin. "The loss made us want to beat our heads on the floor, eat nails, work harder, and come back next year," Bruce reports. "But we lost in the semis the next two years before winning the championship for the first time under Coach Cadra and during the Chancellor's tenure." The victory was sweet and the memory long-lasting.

Bruce shares that playing ball for Dwight was one of the greatest times in his life. "We were a tight-knit bunch as a team and a community. Faculty and students cheered us on and Mr. Spahn came to every game we ever played in four years. That's also something I will never forget."

Tenacity turned out to be Bruce's spark of genius. Never giving up was a skill honed at Dwight, which he says, "has gotten me through life. I learned that you can be sick, hurt, bleeding on the court, but you go on because your team needs you and you need to perform. This came from both Coach Cadra and Mr. Spahn, whose own commitment to becoming a great shooter — and a record-holder to this day — was born out of sheer perseverance and practice, practice, practice. He taught me how to be a better shooter and foul shooter through extensive practice. What's more, he was always a source of support for me in school and when applying to college. His door was always open."

Moving Beyond Dwight, Yet Never Far Away

When it came time to graduate, Bruce said good-bye to the school that had helped to shape him. He enrolled in Ohio Wesleyan and after playing basketball for a year, as well as JV Lacrosse and club rugby, he turned the tables to become a coach's assistant. Bruce had decided to major in K-12 physical education in pursuit of a teaching and coaching career. It would take some time before his dream came true on a full-time basis.

After college, Bruce discovered an entrepreneurial spirit that landed him in a series of retail, finance, and tech business development and sales positions. He worked for start-ups as well as established companies that were each ahead of the curve in their respective industries. Through business success and failure, he never gave up, thanks to the fighting spirit forged through sports, which continued to be an integral part of life. For decades, Bruce played basketball five days a week and coached Little League, and teams in basketball, baseball and soccer.

Along the way and over the years, Bruce was also never far from Dwight. "I always returned, practiced with the team, stayed connected with players, and wanted to give back. I organized and played in alumni games, served on the Alumni Board, and remained in touch with Chancellor Spahn and his growing family. As time went on, the school moved to the West Side and eventually I wanted my daughter, Olivia, to go to Dwight, too." 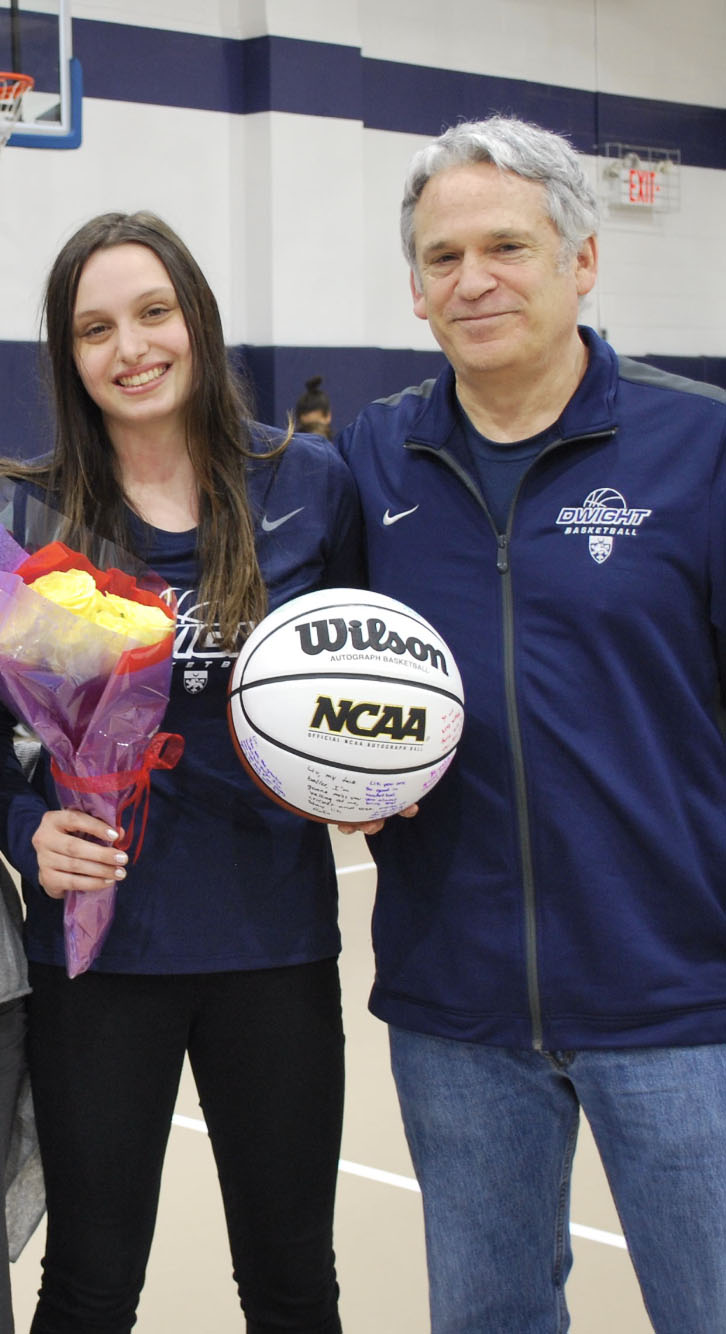 The apple didn't fall far from the Warshaw tree. Olivia, who watched her father play ball from her earliest days became a basketball star at The Beacon School. She was one of the top five in scoring, assists, and free throws in City leagues. Also a natural athlete, Olivia '17 came to Dwight in tenth grade and played on the Varsity Girls Basketball team, which Bruce supported proudly as both parent and assistant coach. Seeing his daughter at his beloved alma mater, "as a star on the court and in the classroom was amazing." The fact that Chancellor Spahn was here to see Olivia play and cheer her team on as he had done in Bruce's day was even more wonderful.

DSAC: A Home Court 45 Years in the Making

When Dwight opened its 40,000-square-foot Athletic Center in 2013, the Dwight Lions finally had a home court advantage and an amazing facility in which to practice and compete. Chancellor Spahn had always wanted to provide his scholar-athletes with the kind of athletic center that we have today. He was able to do so by forging an innovative community partnership with the 1199 Housing Corporation to refurbish their facility, which was shuttered for years because the cost of upkeep was too high for shareholders. After renovations, the Dwight School Athletic Center opened for shared use by both Dwight and 1199 residents. It boasts a six-lane, 25-yard indoor pool, rooftop tennis courts, a regulation-size high school gym, an exercise room, and a dance studio.

"The first time I walked into the DSAC gym, I was blown away by the state-of-the-art glass backboards, rubberized floors, bleachers, and view of the court from above on the second floor." Bruce beams. "I never could have envisioned such a great space in which to play in high school." But play there he did in alumni and pick-up basketball games over the last few years.

Today, Bruce picks up a ball to play every day at DSAC, where he serves as the new Manager of the Dwight School Athletic Center. He oversees the facility's operations in support of everything from aquatics and camp to rentals, 1199 community programs, and more.

"While I was always connected to Dwight as an alum, parent, and coach, my dream was to be working full-time in the community. There is something special about Dwight that always pulled me back," Bruce shares. He credits Chancellor Spahn as one of the guiding lights in his life and Dwight as where he always wanted to be. Now both of his feet are firmly planted here.