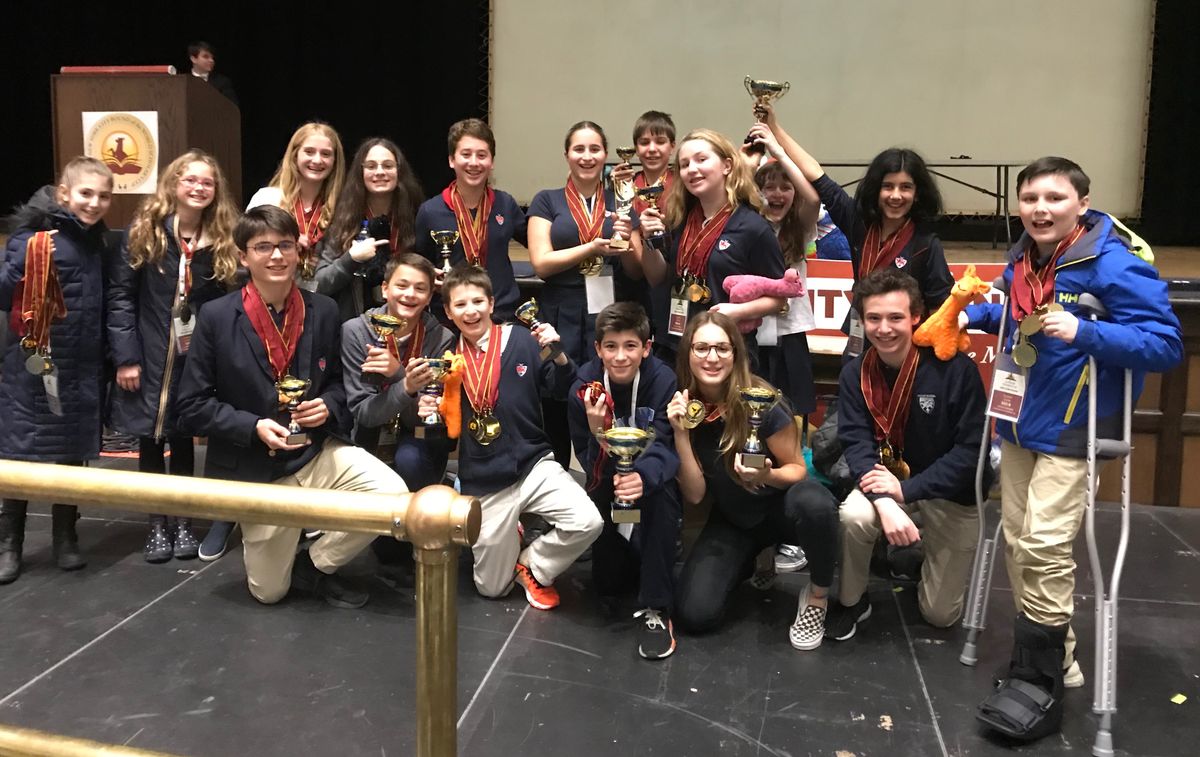 A big congratulations to the Middle School students who represented Dwight at the recent Regional Round of the World Scholar’s Cup — they participated in the Junior Competition at Brooklyn Technical School, winning many awards and qualifying for the Global Round!

A big congratulations to the Middle School students who represented Dwight at the recent Regional Round of the World Scholar’s Cup — they participated in the Junior Competition at Brooklyn Technical School, winning many awards and qualifying for the Global Round!

The World Scholar’s Cup is an international academic competition in which students from around the world study a common curriculum designed to make learning relevant and fun. The competition consists of four categories: a scholar's bowl, team debate, scholar's challenge, and collaborative writing.

To get ready, our students formed three teams and worked hard with their coach, Marie Nieto, Middle School English and Social Studies Teacher, studying a curriculum based on the 2018 Cup theme of "An Entangled World." They honed their debate, writing, and test-taking skills. Our scholarly Lions arrived at the Cup well-prepared and competed in top form.

As the World Scholar’s Cup is a points-based competition, students need to accumulate a certain number of points while competing to qualify for the Global Round — each of our Dwight participants earned the points to qualify and brought home a shiny medal for doing so! Some of our students also won trophies for earning the highest number of points in a particular category: Xuan Stabb '23 (best overall scholar), Francine Gonzalez ’23 (top scholar in writing), Vlad Kolotnikov ’23 (top debater), and our grade 6 students who won top Junior Team — Jamie, Neil, and Audrey. Congratulations to them and to all of our participants from the following grades: Stephanie and Kimberly (grade 6); Duda, Nicole, and Hayden (grade 7); and Max Crola, Amelia Gayle, Jacobo Bustos, Michael Kolodny, Jonah Saltzman, and Nina Hissnauer (grade 8).

Head of Middle School Ron Posner beamed with pride about our team’s accomplishments: “I am so impressed and proud of all our students for qualifying for the Global Scholar's Cup —   and the number of awards they received is phenomenal! They represented Dwight and themselves in an exceptional manner. I look forward to finding spaces around school to display all of their newly won trophies!”

Dwight’s team qualified to compete in September against students from other international schools in the Global Round in either Sydney or Manila for a place at the Tournament of Champions held at Yale University in November.

We applaud our students and their coach, Ms. Nieto, for their dedication and success, and we look forward to watching them compete in the Global Round in the fall!