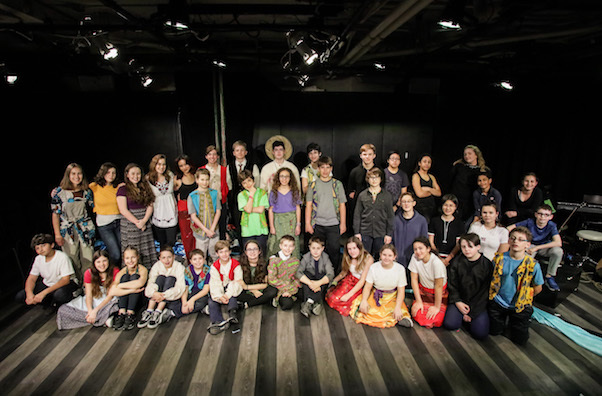 One play, two casts, eight weeks, and 38 ensemble members. That’s what it took to create this spring’s awe-inspiring Bentley House production of Anon(ymous).

Written by Naomi Iizuka, this adaptation of Homer’s Odyssey is the tale of a young refugee named Anon. Separated from his mother, he journeys through the U.S. on a ten-year quest searching for his family. While navigating his way, Anon encounters a gamut of people, ranging from kind to cruel, before ultimately reuniting with his mother. Told in part as memory by Anon, he appears at various ages — played by three different actors — who are sometimes all on stage at the same time. To say this is a complex structure for Middle School students to tackle is an understatement; to say they were up for the challenge is a fact! 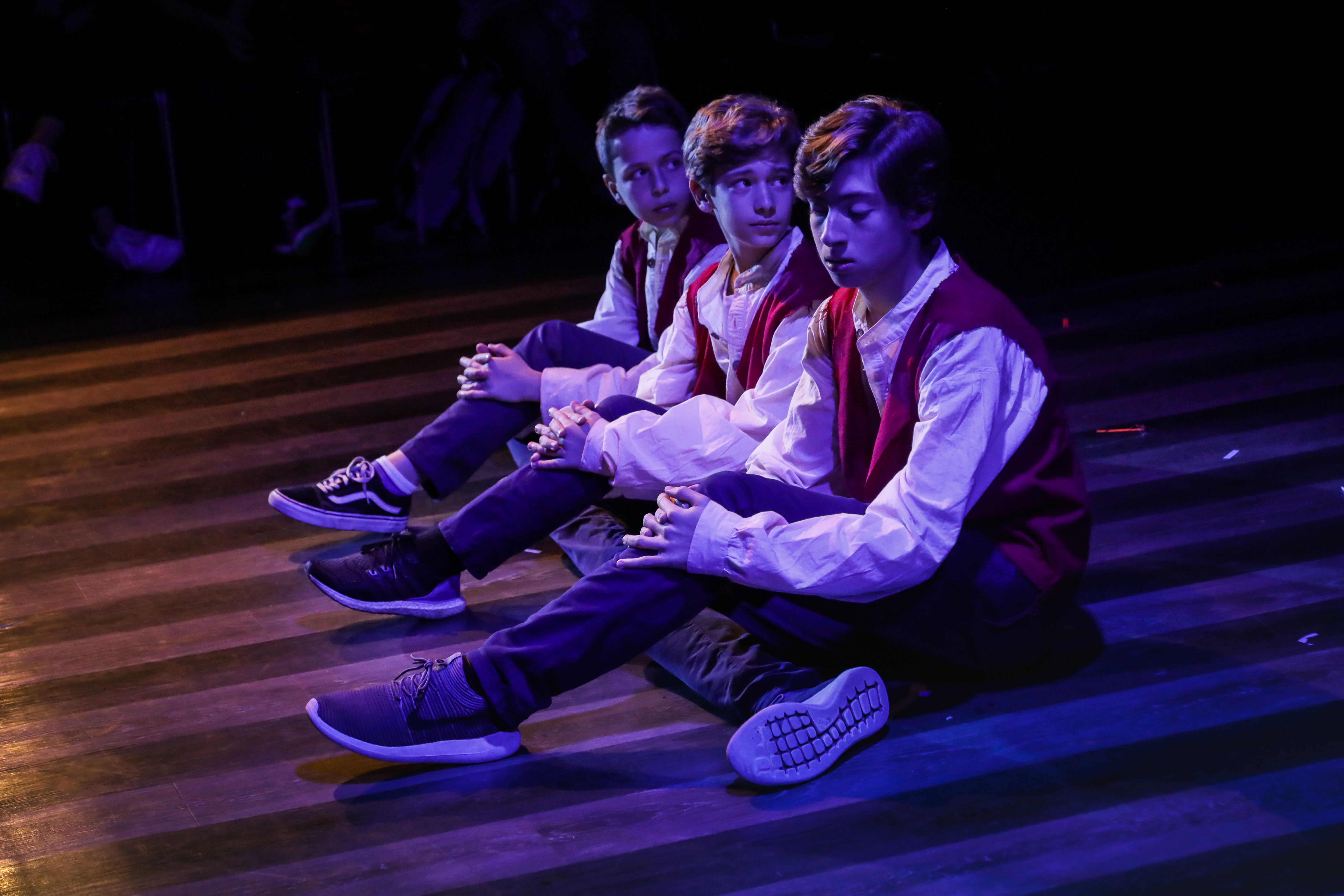 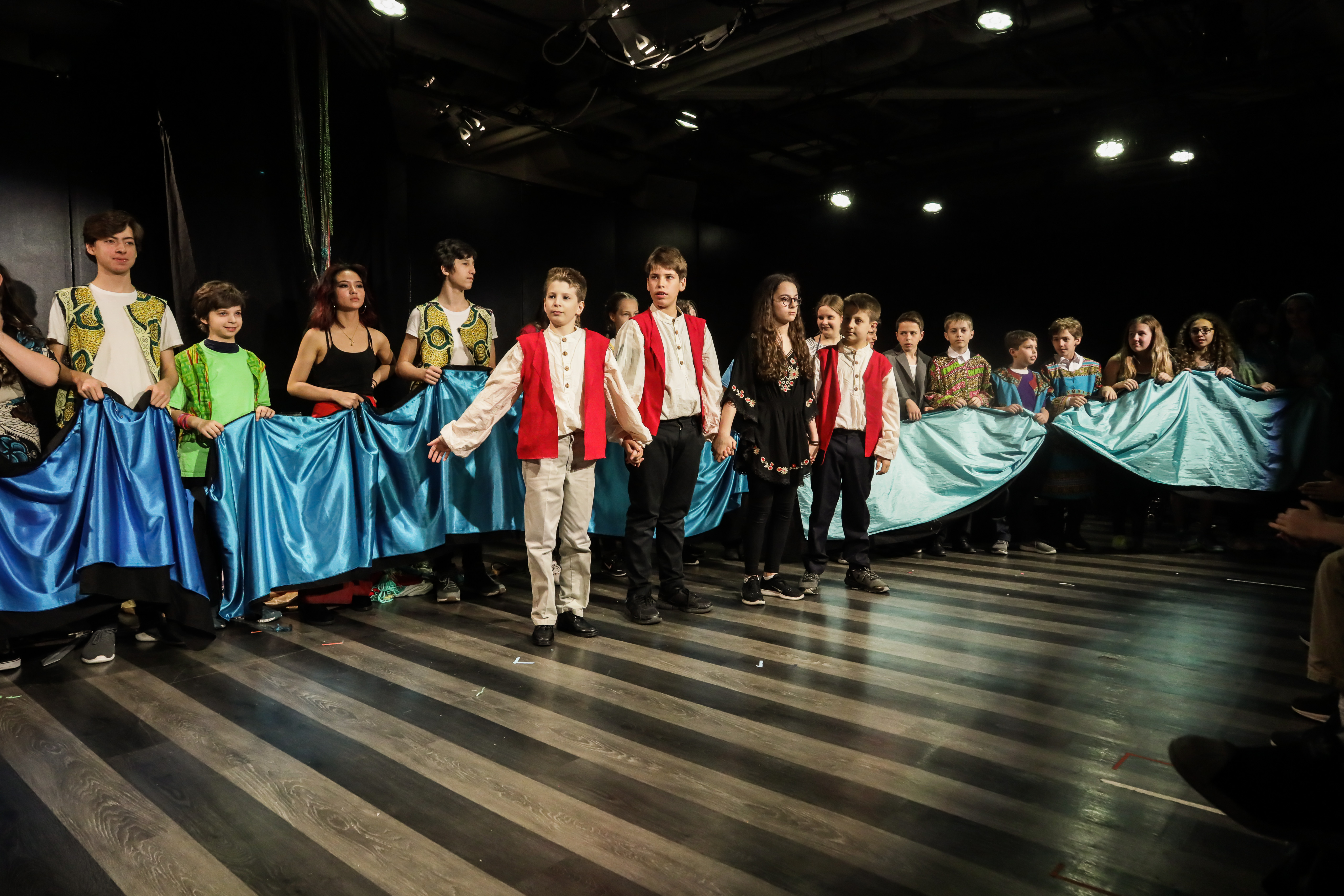 It Takes a Village

“The Bentley House Theater Program is a multidisciplinary endeavor that includes every student who wishes to participate as an actor, designer, director, musician, or technician. They learn and create with the help of several professional mentors, including myself,” explains Kim Guzowski, MYP and DP Theater Teacher. “This year, we had 38 students sign up! With so many enthusiastic students, we faced a wonderful problem: How could we create a project in which all of the eager, talented students could take on a significant role in creating our performance?” 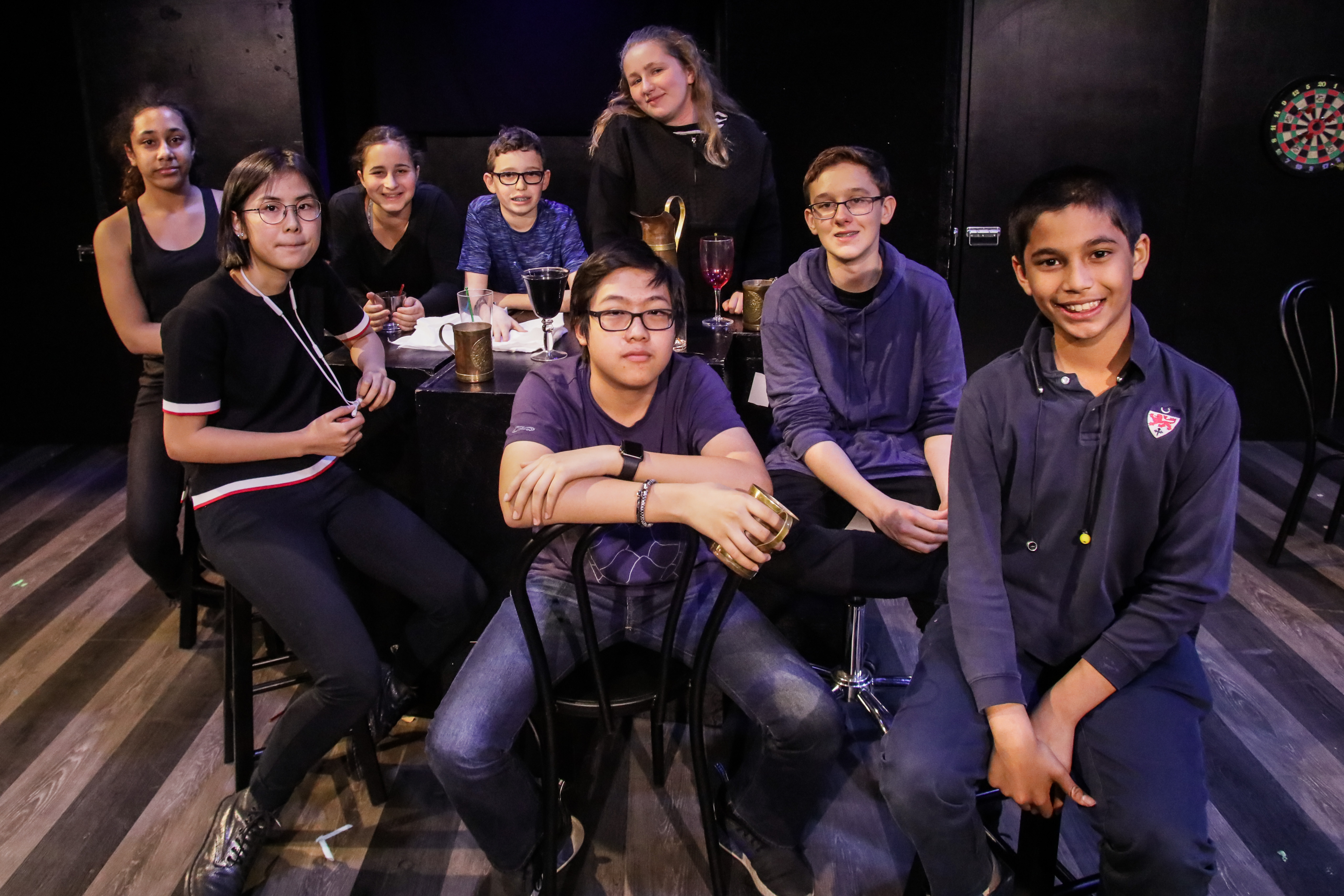 The ensemble of students in grades 6-8 who participated included 30 who wanted to act, inspiring Ms. Guzowski to form two casts so that all could take part — and with each student playing different roles in multiple performances. As if this wasn’t daunting enough, every student has his/her own schedule, making rehearsal coordination into a jigsaw puzzle! “This challenge inspired some to help direct the production, and one truly amazing student, Sasha Klimentova '24, offered to co-direct with me and not perform,” explains Ms. Guzowski. “Without the eighth-grade assistant directing core, and Sasha in particular, we could not have had a two-cast production, nor accomplished all we did in such a short amount of time — just nine weeks from first read to performance!”

In addition to performing and directing, students designed and built the sets and props, composed and played the music, sketched and sewed the costumes, and designed and operated the lighting and sound. The deep level of work that the musicians and design team put into this production created a multitude of landscapes — both physical and auditory — needed to orient the audience while Anon wanders different worlds for a decade. 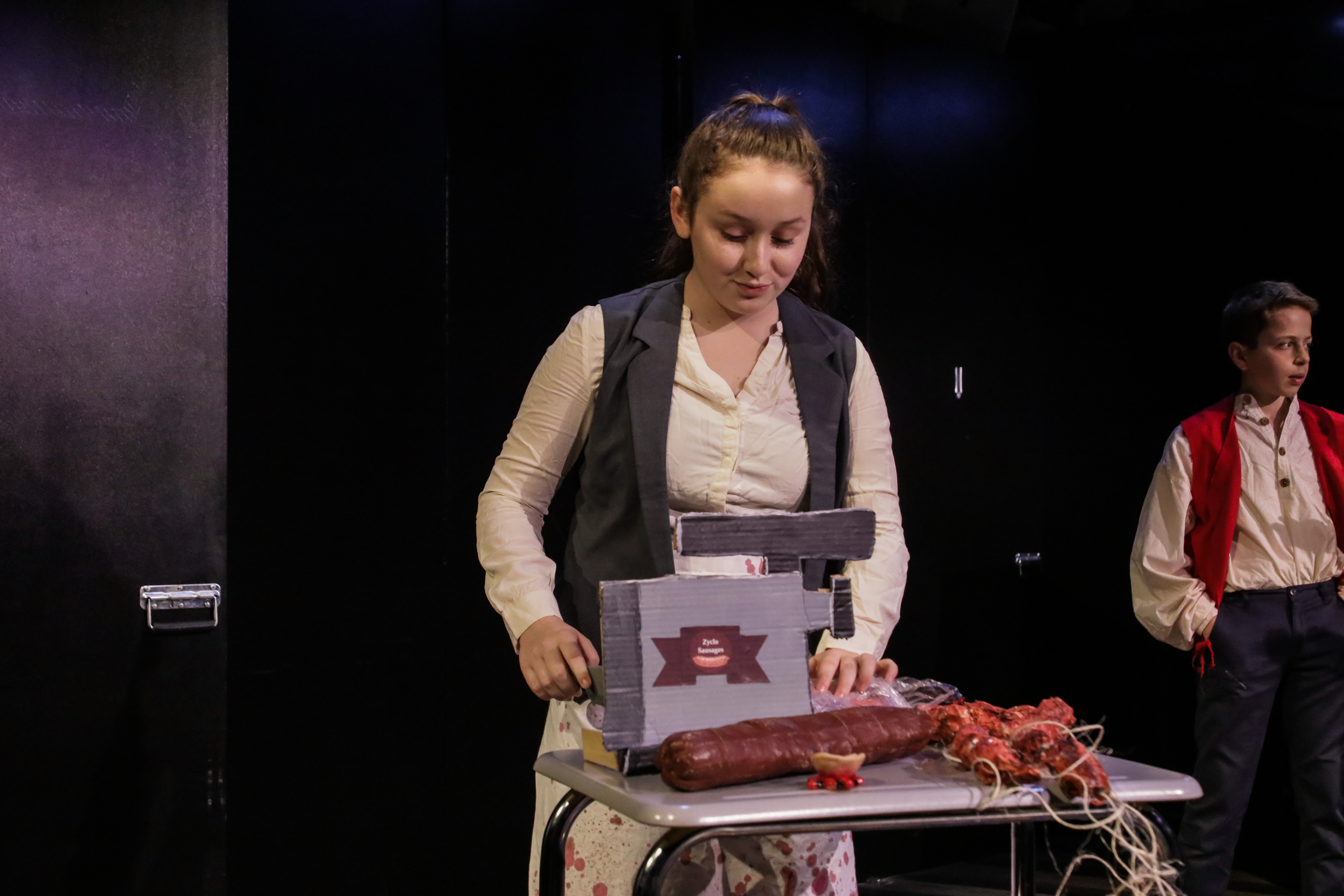 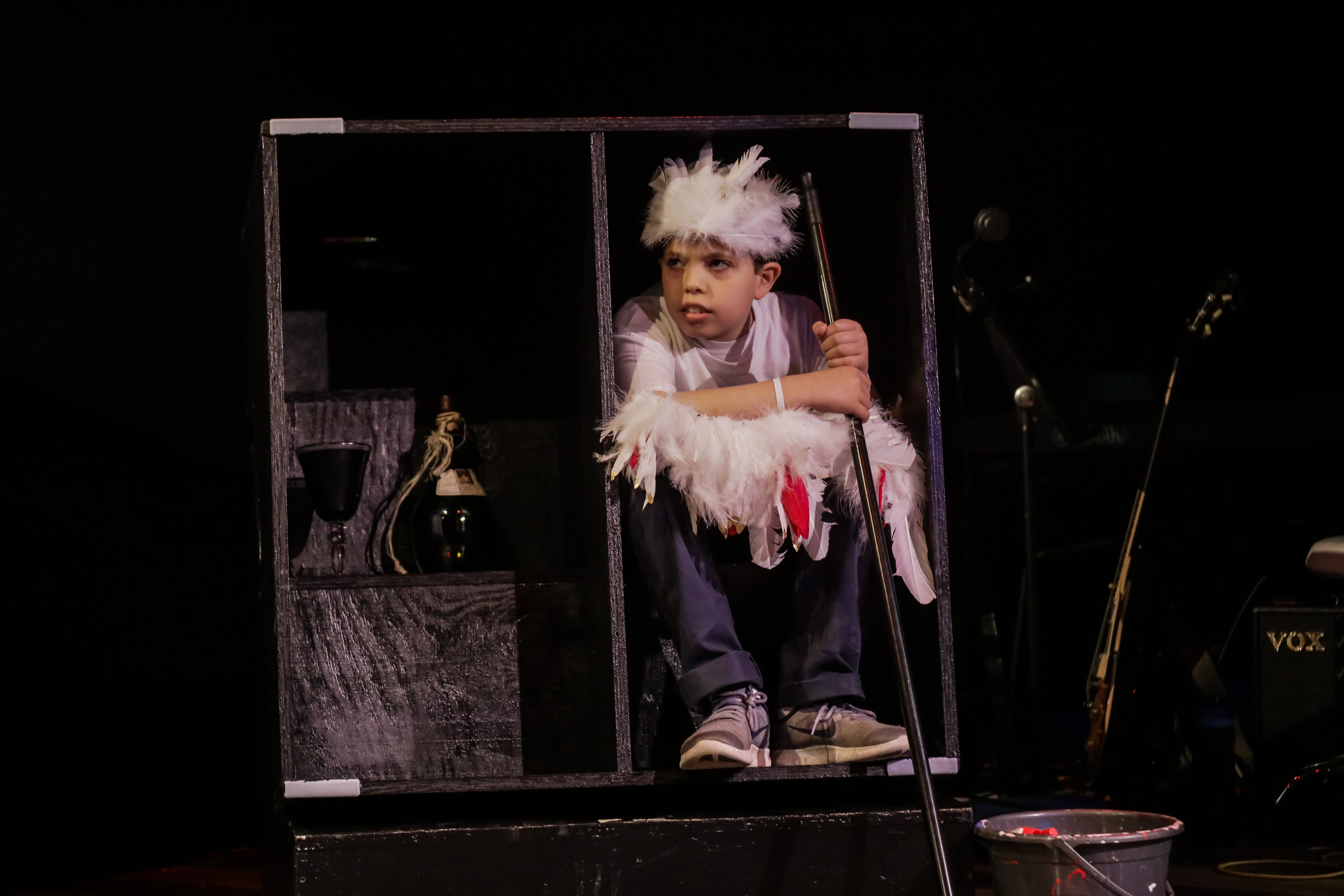 “Each scene in this performance was created by the students in every way to bring Anon’s story to life. I only helped to pull their vision together. Every day, I witnessed their spark of genius, their kindness, their collaboration, and creativity. I count myself lucky to mentor these young artists,” says Ms. Guzowski. 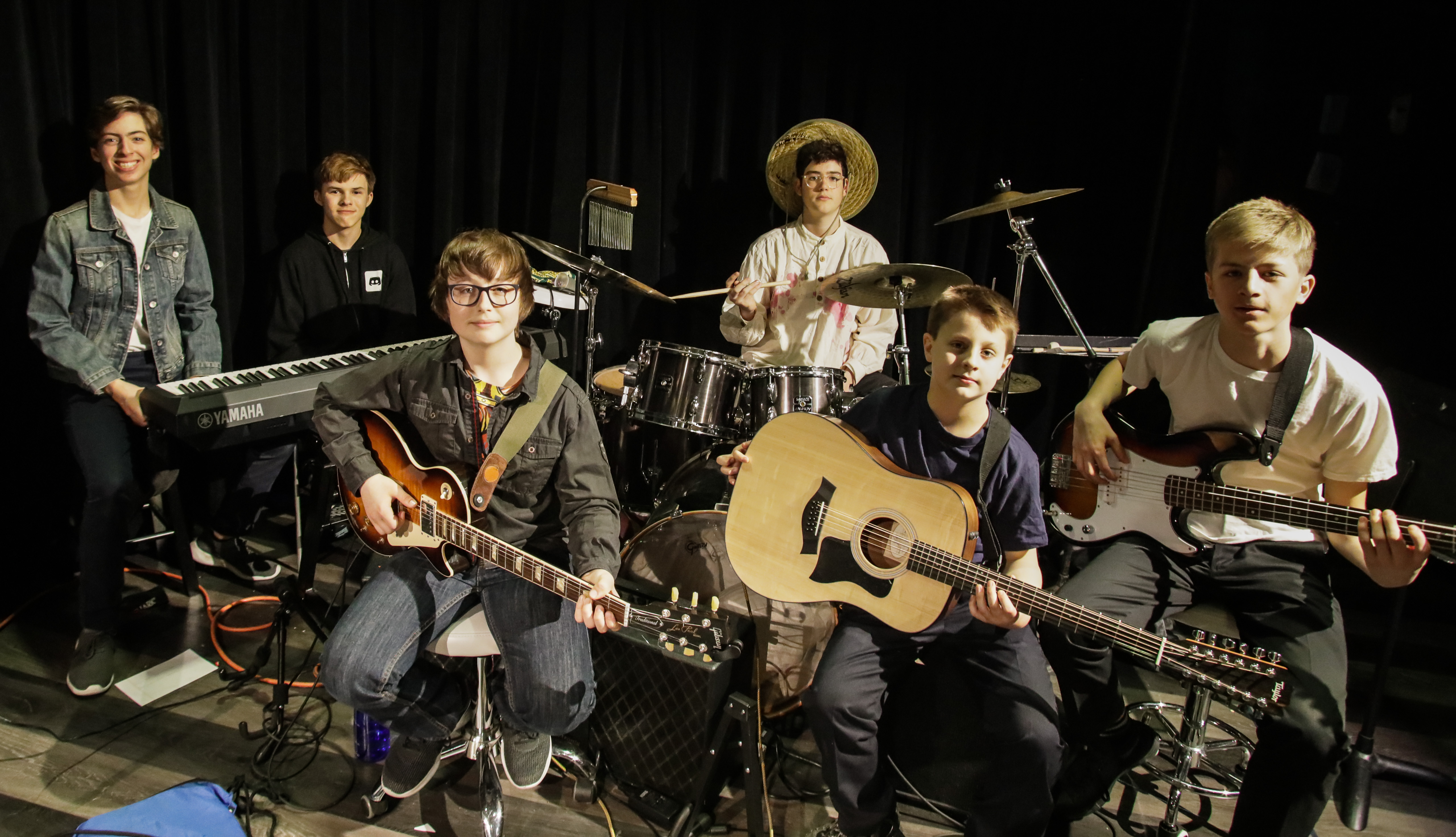 “Anon(ymous) is beautiful and harrowing tale of immigration,” she continues. “I selected it because it allows the ensemble and audiences to explore themes the students are studying in their classrooms: ancient Greece in grade 6; identity and U.S. history in grade 7; and immigration in grade 8. It also allows students to step inside, for a bit, the human conditions of poverty, immigration, identity, war, and family — all of which are especially topical now.”

Ms. Guzowski and the cast consciously addressed the responsibilities of portraying people from different races, cultures, and socioeconomic backgrounds than their own. The process was educational, raising greater awareness of, and empathy for, those living in trying circumstances, being undocumented, and facing deportation. Bernardo Sequiera ’22, on behalf of the entire cast, shared their collective perspective about the process and significance of this play, at this time, so eloquently in the program’s Actors’ Note:

“Looking forward to your performance,” they say. “I hope you know all of your lines,” they say. Little do they know how beyond learning one’s lines acting goes. We artists and creators ask ourselves, Why do we tell stories? Why do we pretend to be people we’re not and why do enact fictitious situations up on a stage? Is it merely to entertain an audience? Or do we do it to transmit important messages, raise awareness about realities different from the ones we live through every day? I prefer to think that the latter is the more appropriate answer, especially in the case of Anon(ymous).

I like to think that theater is not about lying, but about telling the truth. Thankfully, none of us in the cast has been through the same dangers as our hero, Anon, but we all know what it feels like to love someone so much that “that person becomes like home.” We all know what it feels like to long for someone’s presence, and so many of us in this cast know the bittersweetness of remembering the tastes, smells, and views of our homes, now so far away. Though none of us has been chased by opera-loving butchers or guided by mysterious goddesses, we all have people, sights, food, languages, clothes, and music that remind us of home. That is what I mean by saying that theater is about the truth.

It is not so often that actors get the opportunity to bring to life a piece that is so current, that so ambitiously addresses global issues, such as the dramatic refugee crisis our world is going through. However, and at the same time, it is incredibly important that, as actors, we remind ourselves that stories like Anon(ymous), a modern take on The Odyssey, in fact, are being told constantly and have been since the beginning of our society. Anon(ymous) is a timeless story, and nevertheless so well-situated in our present world.

Providing a body, voice, and attitude to these characters that could be seen as ancient heroes, but at the same time, next next-door neighbors searching for a better life was an experience that, on behalf of all in the cast, has been eye-opening. 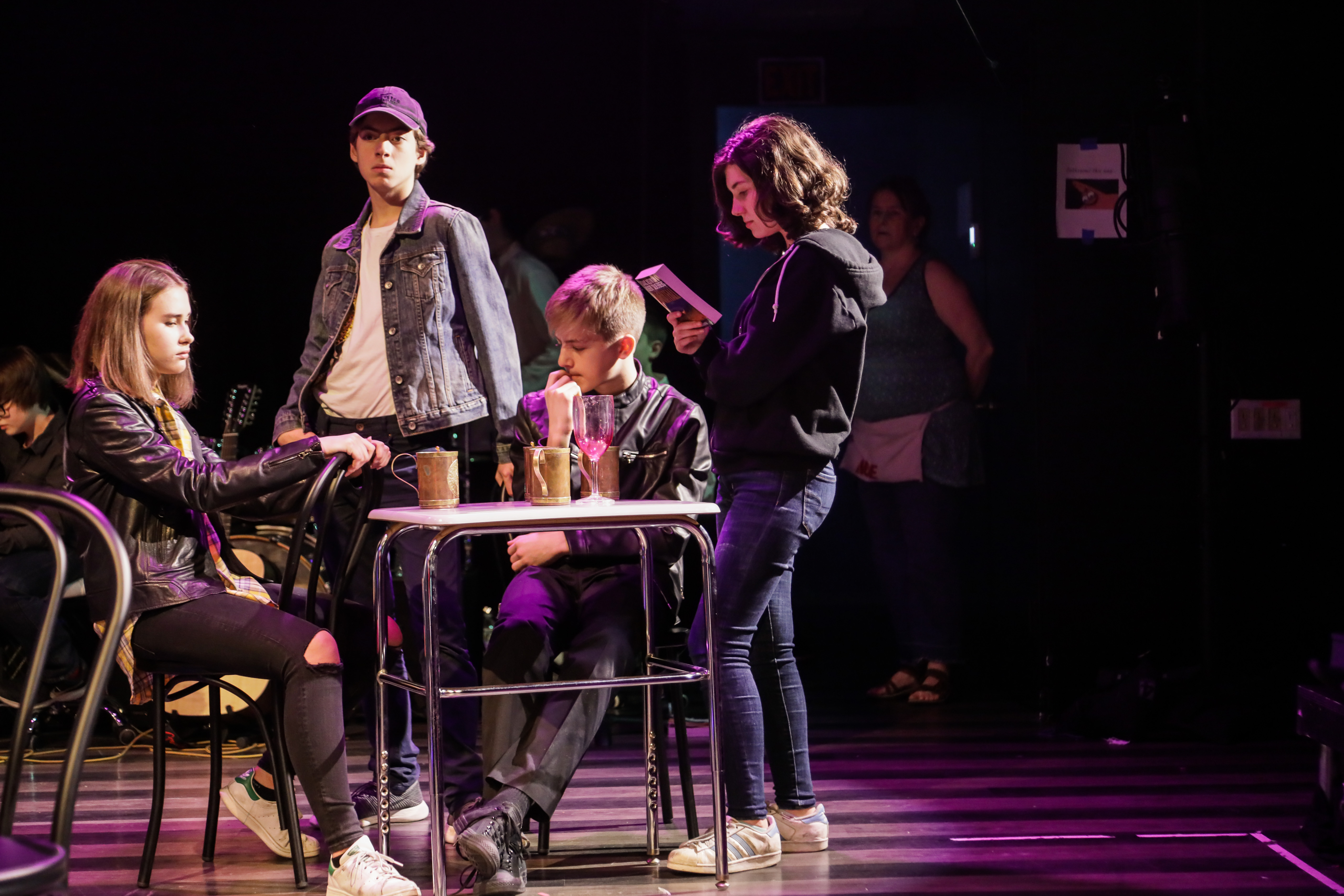 Following the exhilarating performances, the Anon(ymous) story didn’t end. They were followed by “talk-backs” between the students and the audience. Through questions and answers, ensemble members shared their experiences in creating the work and how it impacted them. 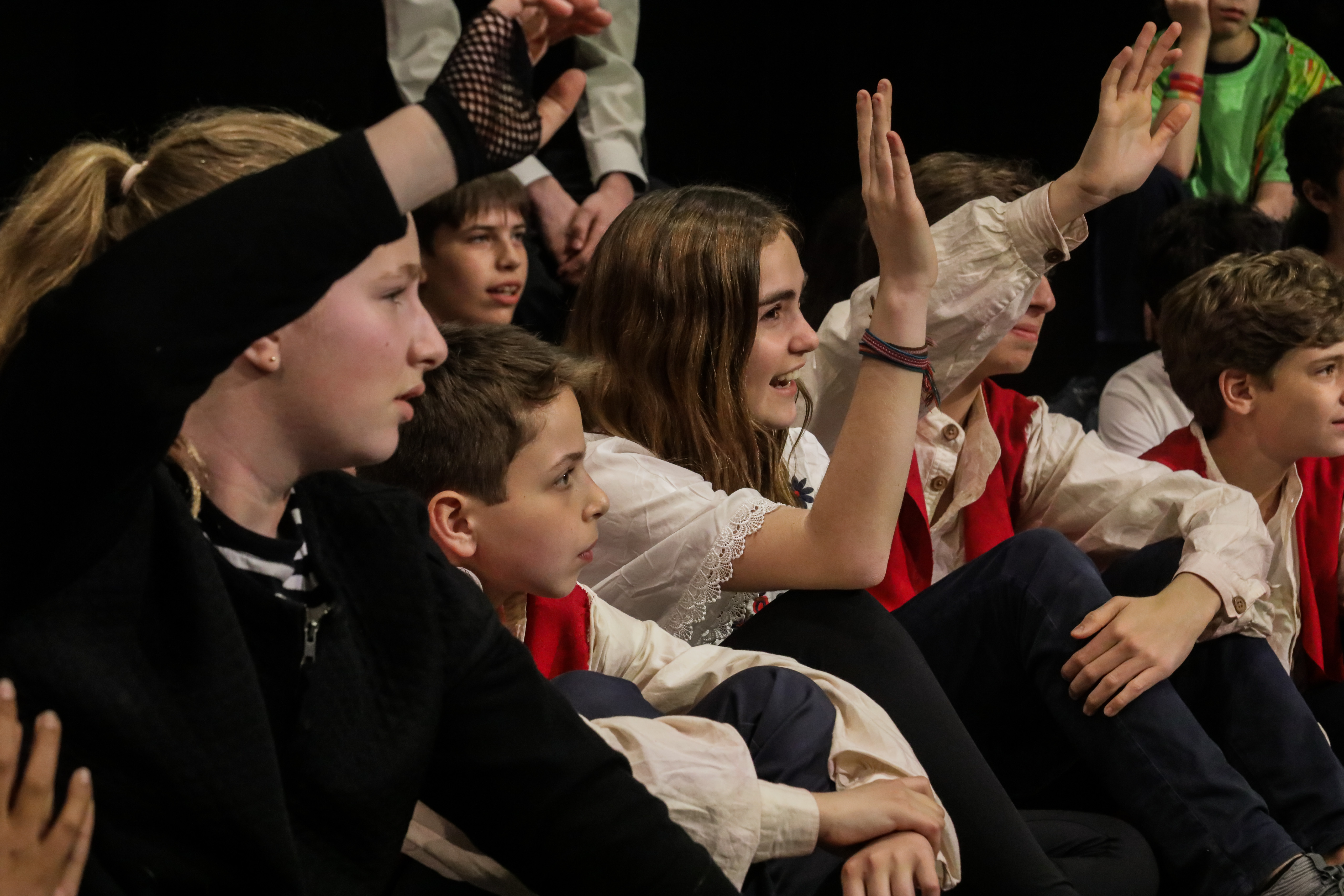 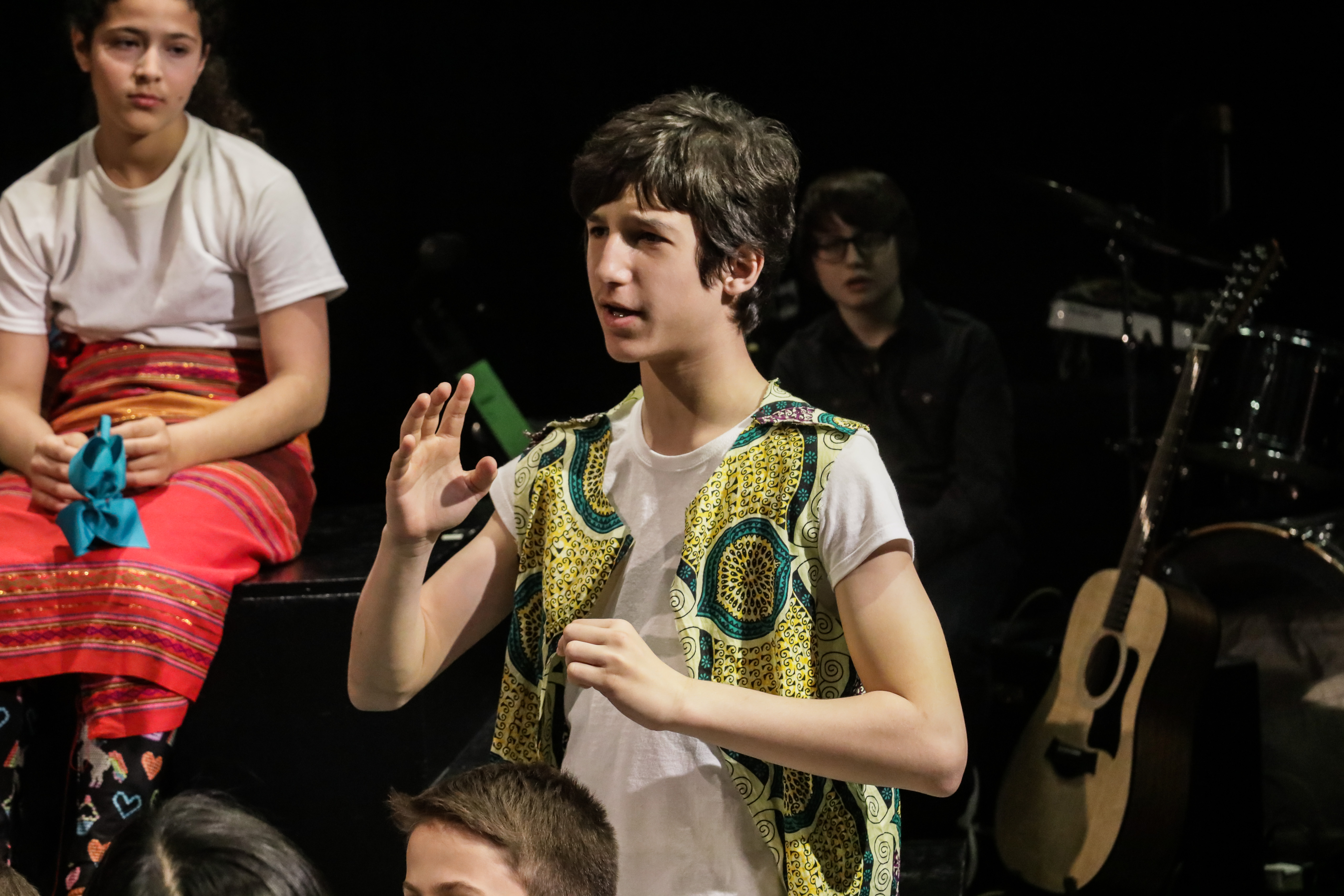 Some students explained that prior to working on the show, they had not previously grasped the magnitude of the problems immigrants face nor the-often desperate situations from which they are fleeing. 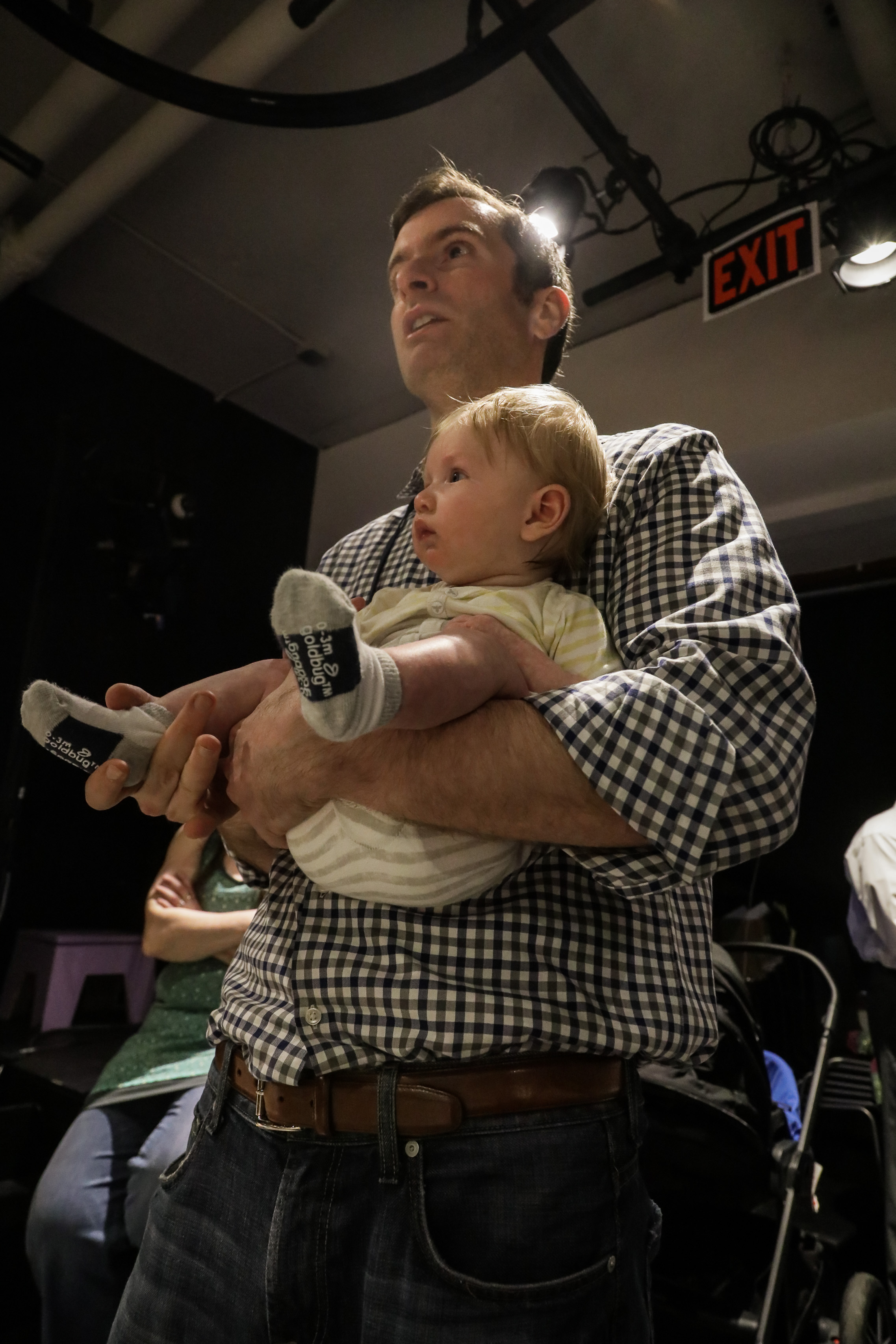 Most of the eighth graders shared their experiences and theater work last week in their end-of-year showcase, marking the first time that after-school projects are included in this annual exhibition. Some ensemble members, inspired by their own Anon(ymous) journeys, plan to take action to help refugees however they can.

And so, the story continues.