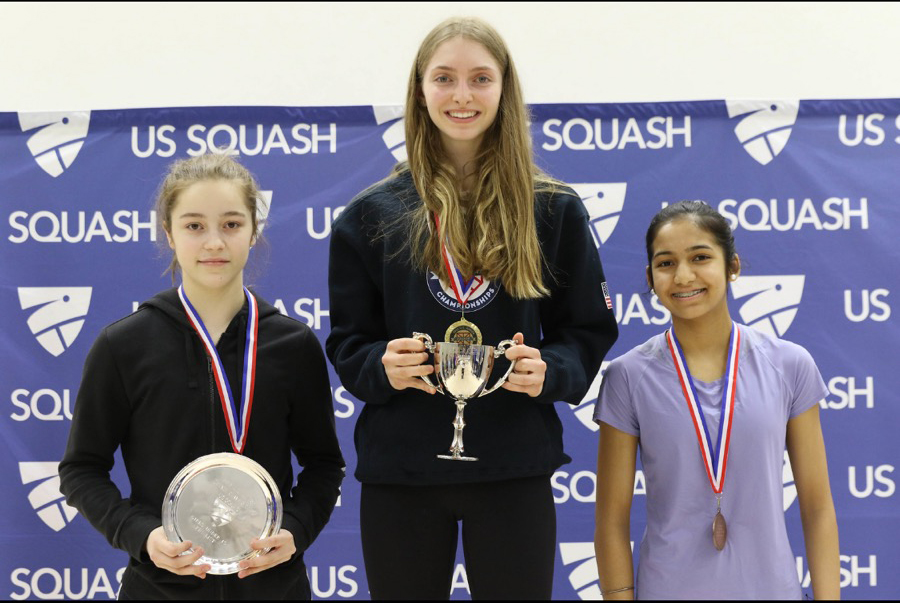 Eighth grader Mika Bardin, who joined Dwight just this trimester, has been developing her spark of genius — squash — since the age of ten.

In just a few short years, she excelled rapidly; after winning the Junior Open Squash Championships in the Girls Under 15 category this January, she is now ranked number-one in the U.S.!

Born in Israel, Mika moved with her family to California, where she discovered squash, before relocating this year to New York. A super-energetic and athletic kid, Mika played soccer, fenced, rock-climbed, and ran track when she first saw squash being played — and it was love at first sight! Mika picked up a racquet and ultimately dropped all other sports to focus exclusively on squash.

Mika’s talent was evident and she trained intensely — two hours after school, four hours daily on weekends, and eight hours a day at squash summer camps — which propelled her onto the national stage quickly. Two years later, she become the number-one player under 12 in Israel. After hoping to play on the Israeli team in the 2017 Maccabean Games, she was considered too young, as the age of entry is 14. But Mika petitioned to compete based on her skill and was granted approval. She also played for Israel in the European Championships the following year, besting the number-two player in Europe under 15 when she was only 13.

Today, as Mika looks forward to competing in the Junior World Championships and the British Open next year for the first time, she explains what she loves about squash. “I have always been on the go, playing sports, and active. When I discovered squash, it offered the rigorous one-one-one competition that I enjoy most. It’s very challenging mentally as well as physically, and I thrive under these conditions.”

At school, Mika takes Hebrew to keep her writing skills sharp, and enjoys studying social studies and discussing current events with her multi-cultural classmates. “I like talking about all the things happening in the world and hearing other people’s perspectives,” reports Mika, who is appreciative of Dwight for supporting her passion. She hopes to become a blended student next year, taking classes on campus and online through Dwight Global, so that she can have the schedule flexibility for additional training.

In her “spare” time, Mika has been giving back to the sport she loves. At age ten, she advocated for squash to become an Olympic sport for the Tokyo 2020 Games; and after learning that women earn less money than men playing squash, she created a GoFundMe “play for equal pay” initiative, raising the purse for women. GoFundMe recognized her as a “Kid Hero” and donated $1,000 toward her cause of pay parity. Recently, Mika served as MC for an event hosted by SquashBond, a non-profit that brings Israeli Arab and Jewish children together on and off the squash court; and she coaches underprivileged kids in an after-school program in Harlem called StreetSquash.

Outspoken and determined, as well as committed to making a difference, Mika reports, “I realize that I can help others and make a change through squash, so I want to do all that I can.”

We applaud Mika for her dedication to this great work — and to her spark of genius. Following her quick rise to number-one in the country, the sky is the limit!