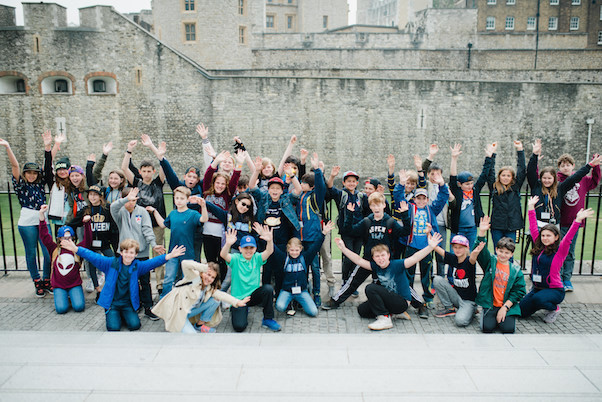 This spring, fifth graders boarded a plane to London, embarking on their first journey abroad as Dwight global citizens.

This spring, fifth graders boarded a plane to London, embarking on their first journey abroad as Dwight global citizens. After crossing "the pond," they met buddies in year 6 from Dwight School London and stayed with their buddies' host families for the first leg in our annual exchange program. Immediately, students were introduced to a different culture and dove head first into a week-long experience that took them from North London, where our campus is located, to points east, west, and south in the historic capital city.

This seminal program is a longstanding Dwight tradition that stretches back 19 years. In 1972, Dwight became the first independent school in the U.S. to establish a permanent campus overseas with the opening of Dwight School London. Today, our global network has expanded to include campuses in New York, London, Shanghai, Seoul, and Dubai, as well as our cloud campus, Dwight Global Online School. So much has changed since Chancellor Spahn first opened the door for students to cross continents and walk in the shoes of their peers around the world.

This year, like every other, fifth graders traveled to school each morning with their host families and then toured with their classroom teachers from New York. They were excited to hop on double-decker buses and take the tube to visit sites such as Big Ben, Westminster Abbey, The Tower of London, Borough Market, the changing of the guard at Buckingham Palace, and so much more. A Harry Potter Wizard Walking Tour of the city was a favorite, along with the London Eye.

Students were eager to bond with their UK buddies, who would be taking the reverse journey shortly thereafter. When London students arrived in New York a week later, our families warmly welcomed them and they were treated to quintessential Big Apple experiences, including rooting for a hometown team at Yankee Stadium, shopping in Times Square, touring the UN, and visiting the Museum of Natural History and the National September 11 Memorial and Museum.

Over the course of the reciprocal exchange, students forged international friendships, broadened their perspectives, and grew in a variety of ways, as captured in this sampling of reflections:

I loved London! It was a great experience to travel with my class. I learned a lot of new things about my London buddy. At first, I was scared I would be too shy with my London family, but I wasn't in the end. I had so much fun exploring and discovering London! — Anouk

I learned that I can be principled and a leader, even in another country. Something that I was apprehensive about prior to the trip that I learned to accept, and ultimately accomplished, was eating different types of food that I don't normally eat at my house! — Guilherme

During the week in London, I learned about how I am able to take care of myself more than I expected. — Enzo

In London I learned that I am a risk-taker by taking a tour of the London Dungeon. I thought it would be super scary, but I told myself to be open-minded and try it out because it might be fun and I might learn something. I was right! I think I can sustain this growth by trying more new things and not being afraid of things I am not familiar with. — Miles