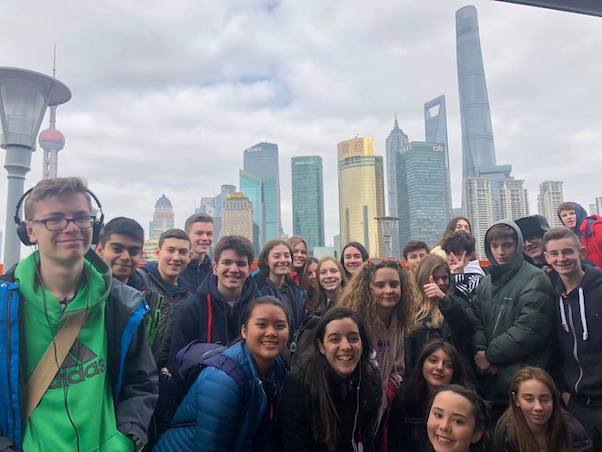 These transformative hours were spent on a flight from New York City to Shanghai, when Alexander and his fellow ninth graders visited Shanghai Qibao Dwight School High School during spring break.

Upon landing, students jumped into a night-time tour of the city and began a week-long immersive experience into the culture and lives of their Dwight peers in China. Stepping into their shoes is eye-opening for New York students; they return home with a broader world view, which is exactly what we hope for.

Dwight students take their initial steps as global citizens in fifth grade, when they go on their first trip abroad to visit Dwight School London. By ninth grade, they are ready to venture farther and to challenge themselves further. They head to Shanghai Qibao Dwight High School, which is the first independent Chinese-foreign collaborative high school approved by the Ministry of Education in China. When the school opened its doors in 2014, it ushered in a new model of education combining the best of Eastern and Western traditions. Since then, through this trip, our annual global Carnegie Hall concert, and cultural and leadership collaborations, students in Shanghai, New York — and across Dwight's global network of schools — have met and forged friendships that will last a lifetime.

These experiences are illustrative of Dwight's commitment to educating the next generation of global leaders — graduates who are internationally minded; sensitive to people whose backgrounds differ from their own; and possess the communication, collaboration, and problem-solving skills to help make the world a better place.

While on the Shanghai campus for two days, New York students began their days with early-morning exercises and breakfast with their cohorts, who live in dorms, followed by class visits, assemblies, and activities. This offered students an in-depth look at what they shared in common, and where they diverged in terms of lifestyle, how their days are structured, and the cultural influences on both the learning environment and student interaction.

When not in school, New York students were on the go sightseeing, visiting Old Water Town, Puxi, Pudong, the Former French Concession area known as the Luwan district, and Hangzhou. They toured Yu Garden, the Chenghuang and Ling Yin Temples, and Green Tree Plantation; along with museums, marketplaces, and Disneyland! As if that wasn't enough, they also had cooking and kung fu lessons.

As their trip wound down, students reflected on what they experienced. Alexander, for one, described that he was returning home with new insights into those he met and into himself:

On this trip I learned so much about the Chinese culture and that you really have to throw yourself out there to have the best experience. I enjoyed visiting the school and now know how much pressure there is on the students and how much they are willing to do just be able to come to the US and learn....

The markets were so cool and it was amazing to see how so many people could depend on making a living [from] selling many things for low prices and how the guy in the shop next to them could be selling the same things....

I loved all the food and was happy I tried everything and wasn't afraid to throw myself out there. In addition, I think I have grown closer to my peers, was so happy I took this trip, and would do it again. ... Overall, I felt that this experience was one of the coolest ones I have had and that the lessons I learned here would stick with me for my life. I think I might change a few of my study habits and probably drink some more green tea when I get back to New York!

Upon returning to New York, ninth grader Natasha Girshin shared her reflection at an assembly. Here are some excerpts:

Last month, we were lucky enough to visit Qibao Dwight High School during our visit to Shanghai. We spent two full days there and the memory of this will stay with us forever.

When we first arrived at the school, they assigned us buddies to tour us around and give us a perspective into what their school day is like starting at 6:30 am. ... The kids who go to school there every day, have much different study habits and much different ways of life than we do here in New York. The classes are somewhat larger, and their learning hours are longer. They don't go to parties, rarely leave campus and spend almost their entire day either in class or studying. ...

Despite differences [in school days and study habits], the similarities between our schools were also astounding. We realized that Chinese kids in so many ways are not that different from us. They enjoy sports, art, music, and connecting with their friends on the Internet. They're kind, curious, respectful, smart, and open to new things. During our trip to China, we saw so much and had an experience of a lifetime. I hope to be able to visit again!

For a look at what two students from Shanghai had to say about spending a trimester abroad at Dwight in New York, click here.