Richard Habersham ’92 was back on campus for Alumni Reunion Day last fall to reconnect with old friends and the school, which he credits with dramatically changing the course of his life. The word, “dramatically,” is most apt.

Richard was a child actor. His mother, in an effort to steer her 12-year-old away from watching too many weekend cartoons, enrolled him in classes at the Amas Eubie Blake Children’s Theater in Harlem. It wasn’t long before Richard’s innate talent was recognized. After being picked to play the male lead in My Fair Lady, the Theater’s Artistic Director, Rosetta LeNoire, who had a successful career in film and TV, suggested that he find an agent.

Richard’s mother took the advice, opening the door quickly for high-visibility casting. He was picked to be in the Roundabout Theatre’s 25th-anniversary production of A Raisin in the Sun, followed by a stint in the original Broadway production of August Wilson’s Pulitzer Prize-winning play, Joe Turner’s Come and Gone.

While working on stage, Richard met Spike Lee, who cast him as Eddie in the now-iconic film, “Do the Right Thing.” Richard went on to play Whoopi Goldberg’s son in the movie “Long Walk Home,” among other roles that kept him top of mind for casting agents.

With a successful career as a child actor, Richard transferred from Horace Mann, where he had been enrolled since kindergarten, to LaGuardia High School for Performing Arts. It seemed an obvious choice to begin ninth grade in an environment where he could hone his craft, “but the tragedy was that I never wanted to be a professional actor; my mother did,” Richard shares. “I wanted to be a ‘regular’ student and go to college. So I didn’t enjoy, or do well at, LaGuardia. I spent too much time playing hooky and not getting good grades for a year and a half. It was during the spring of sophomore year when I realized that if I didn’t make a change, I was going to blow my chances of ever going to college.”

Some of Richard’s long-time friends from Horace Mann had transferred to Dwight, so the school was on his radar. Inspired by their experiences — and with a huge amount of his own pluck — Richard took it upon himself to transfer to Dwight as well.

“One day, I woke up, walked over to Dwight, and knocked on the door,” he recounts. “I introduced myself, said that I knew a few students, and asked if I could speak to the headmaster. Not certain of what would actually happen, I was surprised when Mr. Spahn appeared not long afterward. I almost couldn’t believe it, as I had just landed on the doorstep! He sat me down and asked me why I was there. I told him that I didn’t want to pursue acting professionally and was concerned that I wouldn’t be able to go to college if I didn’t switch to a school where I could be challenged academically. Mr. Spahn listened and said that he would consider my situation, but that I needed to come back with my parents.”

Encouraged, Richard ran home to tell his mother, who was a public school teacher. Though quite surprised to learn of his true aspiration, she was supportive and joined Richard for his return visit to Dwight. At that time, the school was located at 402 East 67th Street. They met with Mr. Spahn, who had been struck by Richard’s self-advocacy and intelligence the first time — and even more so by his follow-through the second.

“With my mother’s approval, Mr. Spahn said that he would take a chance on me. He would provide the opportunity I craved. I could transfer to Dwight if I caught up via summer school,” Richard explains. “And that was it. After some remediation, I began my junior year at Dwight the following fall. My whole life changed. I see it so clearly now, of course, that I needed someone at that moment to ‘save’ me — to help me change the course of my life. Mr. Spahn did that and I am forever grateful.”

During his transition to Dwight, Richard turned to his best friend from Horace Mann, Jeremy Loeb, and to other former classmates who had all made Dwight their home, including Eric Modell, Andrea Capasso, and Mya Gluckman. “We were all together, and I was happy to be in an academically rigorous environment in which I could thrive,” Richard says.

While acting was no longer his sole focus, Richard continued to work to help pay for tuition, so there was no time for sports or extracurriculars. He went on auditions after school, acted in commercials and appeared in an early segment of “Law and Order.”

“I really excelled at Dwight, which gave me a tremendous amount of confidence going forward,” Richard shares. Upon graduation, he attended the University of Virginia and majored in American History. “I was well-prepared academically and had been able to achieve my dream of going to college, thanks to Mr. Spahn and Dwight.”

Four years later, Richard was back in New York, serving as a public-school substitute teacher in Harlem. “That was the hardest job I ever had because the school was low-performing and in such bad shape,” he recalls. “Without a decent school in a community where overcoming odds and obstacles is so often difficult, how can anyone make it?”

He asked this and other pressing questions in a series of articles about politics that he submitted to The New York Beacon, which published them. One reader who was impressed by what he read was Peter Jennings, anchor of ABC News and “World News Tonight,” who brought Richard on board as his special assistant. “Peter, one of the greatest storytellers, was a true mentor and changed the trajectory of my life. I spent two years working alongside him, learning everything I could. After he died, I became a news assistant at NY1News and then a reporter for ABC affiliates in the Southeast for several years.

New York called him back again in 2003 and Richard became an anchor and managing editor at WHCR News, where he hosted a radio show about real estate issues in upper Manhattan. This was yet another fork in the road that led Richard back to Harlem, where he became a real estate broker for leading firms Halstead and Corcoran until he came face to face with an unsettling pattern in the industry: some long-time, elderly Black homeowners were being exploited to sell below market value, prompting him to focus on just helping them to sell at fair market prices. What emerged was an interest in developing affordable housing, so Richard enrolled in Columbia University’s Graduate School of Architecture, Planning and Preservation in 2007 to earn the knowledge and master’s degree that would propel him further in this direction.

Graduating in 2008, the year of the “big recession,” meant that Richard, among countless others seeking jobs, were left in the cold. With no prospects — and none for his wife, a Yale-educated attorney, who had been laid off — the Habersham family struggled to stay afloat. Ultimately, they were evicted from their home, vividly underscoring on a personal level the need for more affordable housing in Harlem. “This was a very dramatic, dark moment, as it was for so many people,” he remembers “We were fortunate, however, to have a safety net. We stayed with family until we got back on our feet, but too many others were not so fortunate.”

Getting back on his feet included working with the Eagles Foundation, where Richard currently serves as President. The Foundation’s mission is to help develop leaders among victims of injustice and social deprivation, who will in turn develop and inspire contributing citizens. He joined the Foundation’s team ten years ago to work with its founder, John Wareham, a leadership consultant whose work with imprisoned men helps them to refocus their lives. Richard also became President of Diversity Development at Wareham Associates, where he has also worked for the last decade.

Today, the Habersham family, which includes ten-year-old Richard Parnell Habersham III, lives on West 157th Street and Riverside Drive. With a growing son, Richard wants to do more to give back to the community, which he believes can be stronger, fairer, and have bolder, better leadership. “I’m frustrated that while Harlem is thriving in so many ways, too many residents don’t have access to basic resources,” he asserts. “I want to use my experiences and commitment to bring about change.”

To do that, Richard is running as a Democrat for Harlem’s 13th Congressional seat currently occupied by Adriano Espaillat. He shares, “Ironically, District 13 begins at 96th Street, where I remember being with my mother one day. As we crossed the street at Park Avenue, she pointed out that some of the wealthiest people lived on one side of 96th Street and on the other were some of the poorest in the county.” With that striking demarcation, Richard says, “We need to reach across the divide in a two-way exchange of ideas and imagination.”

Richard wants to reach across, and in so doing, he is aiming high. As a newcomer to politics, he is ambitiously skipping over a run for City Council or State Senate in the hopes of unseating the incumbent in Washington. He believes that his life experiences have prepared him for the job and while it may be a long shot, it’s well worth the effort.

His website, HabershamforCongress.com, says, “As a progressive Democrat, I stand for affordable housing, better schools, quality job opportunities for residents, senior care funding, universal healthcare, and environmental justice. I am ready to bring a new voice to these issues in Congress.”

Richard wants to use that voice to prevent residents from moving out of the community due to the lack of affordable housing; improve schools, which he says, “are failing at preparing our children for the jobs of today, let alone tomorrow; and find solutions to some of the area’s most pressing problems.” 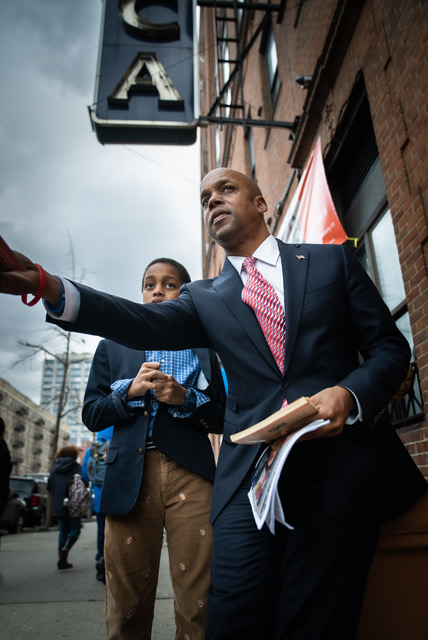 Additionally, Richard, who is a Board member of the Classical Theater of Harlem, describes wanting to preserve Harlem’s history. In an interview with The Amsterdam News, which coincidentally boasts a Dwight alumnus, Elinor Tatum ’89, as Publisher, Richard said: “Harlem is at a crossroads and it needs a bolder vision for the future. We are on the cusp of this neighborhood that nurtured the likes of James Baldwin, Tito Puente, Harry Belafonte Ralph Ellison, Ossie and Rudy Dee, Langston Hughes, Adam Clayton Powell, A. Phillip Randolph, Malcolm X. Parts of it are turning into a museum, or a place where you go where you know history happened, but you can no longer feel it.”

With ambitious goals and lots of passion, Richard is campaigning to represent the community he loves. “Maybe this is what I was put here to do,” he muses. “I want to give back, and while it’s an uphill battle to unseat someone, I believe that if successful, I will be able to bring something new and needed.”

Richard, whose spark of genius may be to always aspire for something more, has true grit and tenacity. He had that at a young age. When Richard advocated for himself, Chancellor Spahn took notice. “He rewarded me for the grit that drew me to Dwight’s door and for my presumption — determination — to grasp for something better,” Richard says. “This speaks volumes of the man, who had a tremendous impact on my life.”