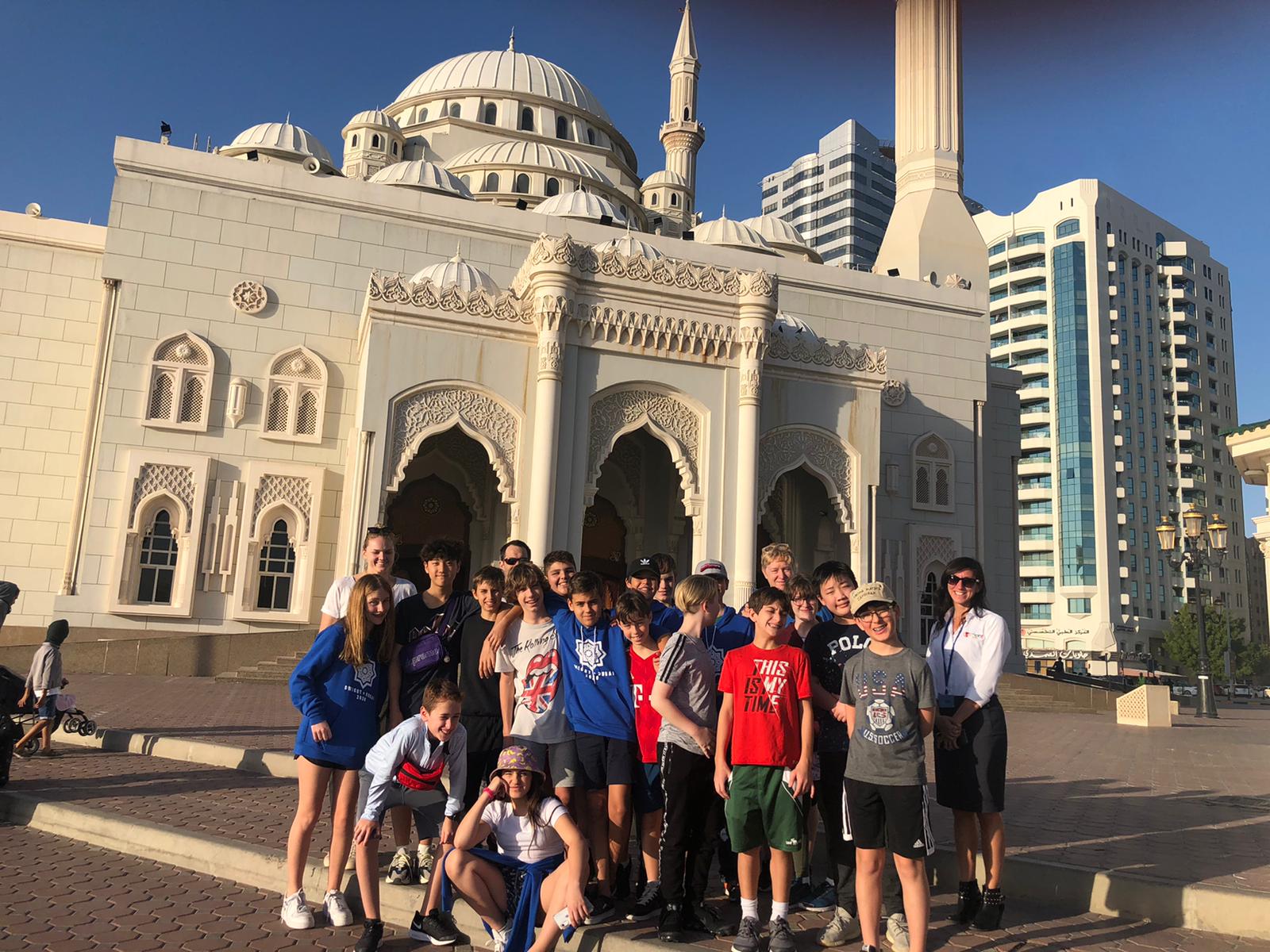 “I chose to come on this trip because I wanted to meet new friends, discover new places, and learn about different cultures. This trip taught me all about how to communicate with the unfamiliar, and to be open to trying new things and experiencing the unknown!” - Eli

Eli together with 27 seventh-grade classmates experienced a whole new world as they embarked on our first exchange program with Dwight School Dubai. After a long flight, our globetrotting students arrived and hit the ground rolling with a tour. They caught their first glimpse of the city’s sights, including the man-made Bluewater and Palm Islands, the beachfront of Le Mer, the towering sail-shaped Burj Al Arab, the Souk Madinat, the Jumeirah Mosque, and the Dubai Frame building. They also ascended the tallest building in the world, the Burj Khalifa, and took in a panoramic view of Dubai from the observation deck on the 124th floor.

Students continued their adventure over the following days with an archaeological tour and a trek into the Valley of the Caves, where they learned about fossils and paleontology. Also on the itinerary were visits to the Sharjah Islamic and the Sharjah Heritage Museums, and the Kind Fisal and Al Noor mosques.

The cornerstone of this journey was visiting Dwight School Dubai, our first campus in the Middle East located in Al Barsha South. We watched with great excitement as the school emerged literally from the sand and opened its doors in 2018, bringing something new to the highly competitive independent school marketplace — Dwight’s singular commitment to igniting the spark of genius in every child.

When they arrived at Dwight School Dubai, seventh graders met their “buddies,” attended classes, and participated in a range of activities, including a visual arts collaboration. In addition to making new friends, some of our students reconnected with an old friend: Linda Fussell, who is now the Head of Lower School in Dubai! Our students knew her when they were little lions and Ms. Fussell was the Associate Head of Preschool and Kindergarten in New York.

Another exciting part of the school visit was taking part in the International Day celebrations, which included performances by Dwight School Dubai students, food from around the world, and traditional Emirati music and dance.

This enriching exchange program is the newest among several that our students enjoy as members of Dwight’s global network of schools. Our cross-campus visits date back 22 years, when fifth graders in New York took their first Dwight flight across the pond to visit Dwight School London. Continuing this long-standing tradition today with a reciprocal visit in New York for London students, Dwight charts a course for students to broaden their perspectives and worldview, experience other cultures, and step into the shoes of their peers on other campuses, including those in Seoul and Shanghai. Dwight also offers students opportunities to participate in performing arts collaborations such as the London Choral Extravaganza and our annual global music festival, held last year in Shanghai and coming next week to New York.

Through all of these experiences, Dwight students bond more closely with their fellow classmates and forge international friendships that will endure well beyond their years in school. Doyle put it best when he shared: “My favorite part about the trip was visiting Dwight Dubai because I made a lot of new friendships!”

Our travelers’ exposure to Middle Eastern traditions extended with a ride on a traditional boat called a dhow; touring the old city; shopping at the Spice and Gold Souks; and visiting the Arabian desert, where they saw a falcon show, ate falafel and shawarma in colorful campsite tents, learned about the art of henna tattoos, tried sand-boarding, and of course, rode camels!

“Going to the sand dunes was one of the most fun things I have ever done! We ran and jumped off every dune together,” reports Nico, who shares many of his classmates’ enthusiasm for the desert experience. The exciting day closed with a performance of Tanoura folk-dancing and fire blowing.

While traditions run deep in the UAE, there is an equal amount of innovation with the rapid growth of new buildings, communities, and industries. On a day trip to Abu Dhabi, students visited Masdar City, a low-carbon urban community, where they learned about sustainable development and architecture, water and energy efficiency, and rode in the world’s first on-demand driverless vehicle!

Our Lions also visited Abu Dhabi’s Sheikh Zayed Grand Mosque, one of the world’s largest mosques; and the Qasr Al Watan, the presidential palace to learn about the governance and culture of the UAE.

In just one week, our seventh grade travelers took in so much and returned home with a wealth of new experiences and knowledge about both the past and future of one of the world’s most exciting cities.

In her reflection, Audrey describes it eloquently:

Dubai has such a unique and interesting culture, and this trip gave me a great chance to try new things. It was a mixture of Bedouin history, beautiful art and food — and a forward journey into the future of green energy and driverless cars in Masdar City.

Back home in New York, it’s just a few short weeks until we welcome Dwight students from Dubai, together with those from London and Seoul for this year’s global music festival. This cross-campus collaboration, which has been months in the planning, will culminate with our concert at Carnegie Hall on February 21. We can’t wait to hear the music our international community will make together that evening — and in the years to come!