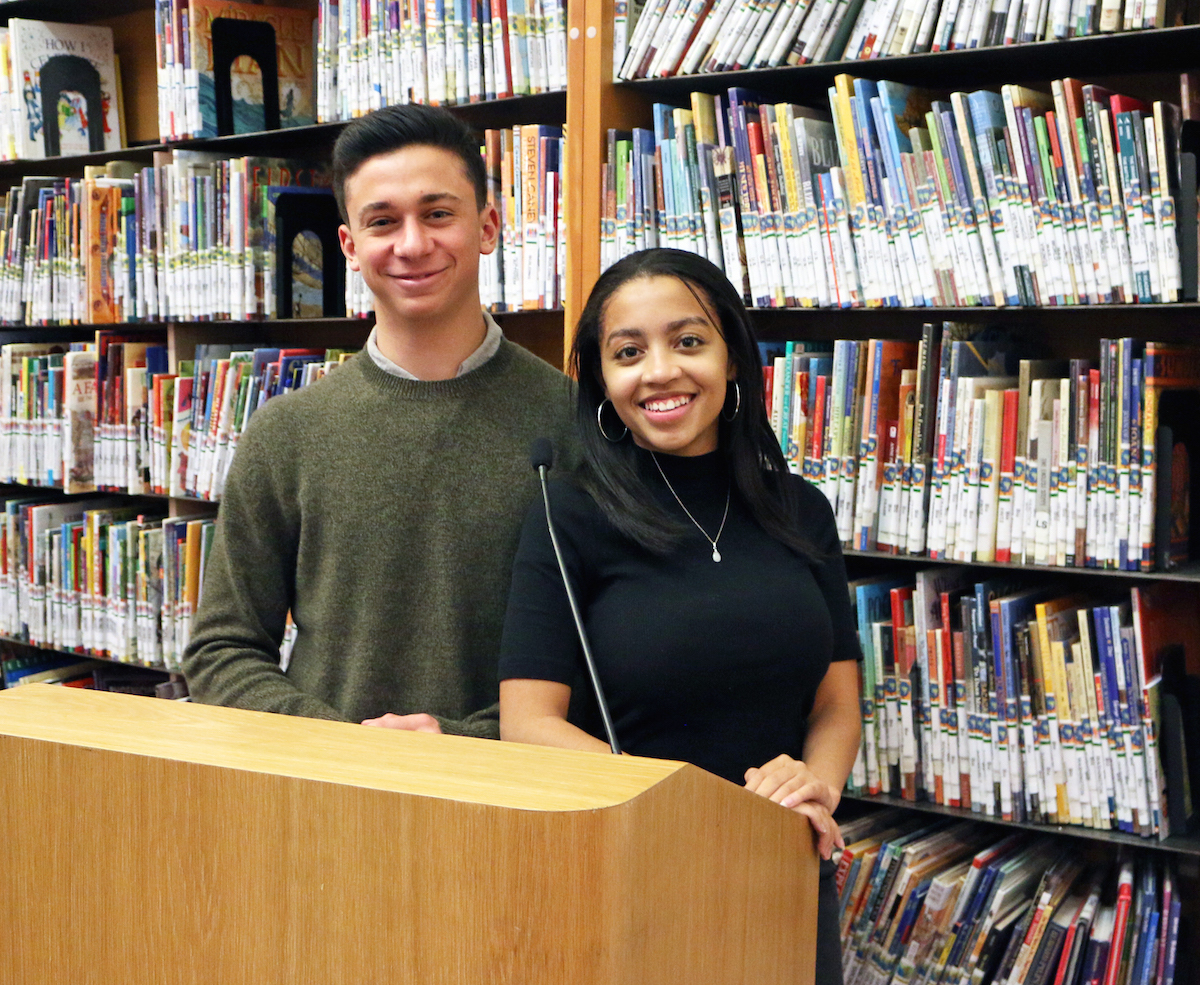 Student Council Co-Presidents, seniors Jada Morgan and llan Pesselev met in third grade, when Ilan joined Jada's class at Dwight. Recently, when they were invited to visit Timothy House to discuss conflict resolution with current third graders during their unit of inquiry on the subject, Jada and Ilan jumped at the opportunity!

Third graders wanted to know: "Why share being president?"

Jada explained it as follows: "We both knew that we wanted to be president. We compromised and decided to be Co-Presidents and work hand in hand, combining our efforts, so that we could be a super-team!"

Making the decision to run together was easy, and it wasn't the first time this duo collaborated to break the mold of student government. Jada and Ilan have both participated in Student Council since tenth grade, when they served as class representatives. Last year, they both ran for Vice President — the first time that juniors had done so. They proposed and wrote an amendment to the Student Council Constitution, as it stated that only a senior could hold the office of VP. The amendment passed with a majority vote in the council, and Jada won, becoming Dwight's first junior Vice President. Ilan served as a grade 11 class representative.

The pair followed that up this year with another amendment proposing the alternative option of Co-Presidents in lieu of traditional President and Vice President roles. It passed, and the rest is history!

While Ilan and Jada's sparks of genius are different, they think the combination of both further strengthens their contributions to the office of President. "As President, you have to be involved in all aspects of the Dwight community, which is another reason why we wanted to be Co-Presidents together. Our individual involvement and interests provide a balance," reports Jada.

Ilan loves technology and science, and considers his spark to be innovation. Together with partners Jack Basora '18 and David Lindsey '18, he launched a youth clothing line called Suivant NYC through Spark Tank, Dwight's incubator designed to nurture student innovation, entrepreneurship, and leadership skills beyond the classroom.

Ilan also started a student technology committee last year with Marcus Kapoor '18, under the guidance of Director of Technology and Innovation, Matt Moran. In addition, Ilan is a member of Dwight's competitive math team. He says that he will likely major in mathematics or biology in college.

Jada's spark of genius is communication. She's been the Editor-in-Chief of Dwight's yearbook every year since eighth grade — now that's what we call commitment!

As a captain of the Varsity Volleyball team, she specializes in cheering on teammates. Her coach, Tiam Chuck, shares, "Jada enjoys leading the team in cheering and fostering team spirit — and she excels at it! In fact, it was that same spirit that helped our team to claim [a recent] victory."

Jada looks forward to majoring in communications in college, and while she's interested in studying political science, she doesn't think she'll pursue politics as a career. But law, Jada reports, is certainly a possibility.

On the job, these Co-Presidents enjoy acting as leaders for their fellow students. So, what's on the agenda this year? Jada says, "Ilan and I really want to create change that people can actually see."

They're focused on continuing to create opportunities for student involvement, as well as accomplishing some longer-term goals from previous years. They are working on planning Upper School morning meetings led by Student Council, and inviting students to Student Council meetings to create more awareness around the process. Ilan and Jada want their peers to gain a better understanding of the council as a medium for action on their behalf.

Ilan adds that they'd also like to have another student-led assembly during the year, one that is engaging and interactive. Jada adds, "There are a lot of powerful voices in our school and we want to include them there."

Additionally, the team wants to establish a Dwight support group to rally school spirit and attend games, shows, concerts, and other events together.

Jada and Ilan are working hard to continue improving our school because they're truly passionate about Dwight. Ilan says that the close-knit community is one of his favorite parts about coming to school.

He's also passionate about academics at Dwight. "I love the curriculum and how Dwight presents the IB to us. I feel like I'm designing my classes and am in control of my education," Ilan says. "Everything you do in all of your classes is so immersive!"

Jada adds, "It's amazing that Dwight sets up all these systems for students to really step up, make their presence known, and be active members in our community — which translates to being active members of society."

Ilan and Jada will be heading off into the world beyond Dwight after graduating this spring, but they're not in any rush to go.

"I have so many mentors at this school who have helped me in so many ways," says Jada. "I'm really going to miss my teachers and the bonds that I've built with them."

"I don't want to leave! I'll miss the community and coming here every single day," Ilan shares. "It's a home away from home."

Rest assured, Jada and Ilan will always have a home at Dwight. We can't wait to see what they tackle this year — and what they go on to accomplish in their bright futures to come!