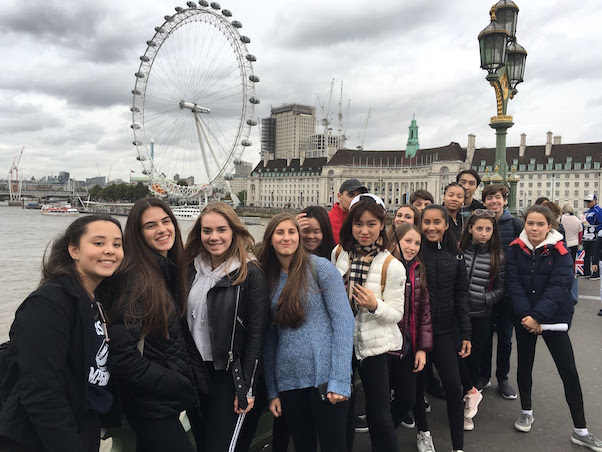 "A trip can be something that will change your view about so many things. For me, London was an amazing opportunity.

"A trip can be something that will change your view about so many things. For me, London was an amazing opportunity. I fell in love with everything, and it's currently taking all my energy to have to leave. I would love to stay!" wrote junior Regina Castellanos in her reflection the night before heading back to New York from a weeklong choral "extravaganza" program at Dwight School London.

This trip is one of several that Dwight students take each year, exposing them to other cultures, broadening their worldview, and providing a variety of enriching experiences that can transform them, as it did Regina. She and 17 other students from New York in grades 8-11 traveled across the pond for a new choral program spearheaded by Dwight London's Music Department.

Upon landing at Heathrow, our students hit the ground running! The group embarked on two days of sightseeing to absorb the history, majesty, and culture of London, prior to turning their attention to singing. Some of the stops were selected to tie into the musical theme ¾ a back-stage tour of the Royal Opera House, a concert at the Royal Albert Hall, and an evening show of "Thriller Live" in the West End.

"I loved getting to know people from different cultures and reuniting with my buddy from when I was ten years old," shared eighth grader Maya Singh. She and others on this trip had visited London a few years prior, when they took their first steps as global citizens through Dwight's annual fifth-grade exchange with Dwight School London. So, too, did older students reconnect with friends they met when visiting our campus in Shanghai over the last two years.

Many new friendships were also born ― "relationships formed through a mutual love of music," explained eighth grader Bernardo Sequeira. "During the rehearsals, it was fun to listen to each other and to how all the parts work together to produce amazing sounds. I learned a lot," shared tenth grader Elaine Song.

Students came with a range of singing experience, from novice to veteran. Ninth grader Jorge Luis Alonso, who had not sung previously, discovered that he is a bass. He said that he learned so much about himself in addition to singing, including how to be independent and how to make tea!

"This choral program enabled students of mixed ages and a varying degree of comfort singing to rehearse intensively, perform together, socialize, and enjoy the vibrant musical culture that London has to offer," said Alistair Hamilton, Head of Performing Arts. "These global musical conversations are important and create life-long memories for our students."

Adding to the special experience was seeing former Dwight New York students now living in London. Tarkan Dermis, whose family relocated last summer, greeted everyone at the door of Dwight School London, where he is now a student in year 11. Brother and sister Solal and Anouk, who also moved, met their friends at the hotel and attended the culminating concert aptly entitled "SING!"

Who else was in the audience on show night? Chancellor Stephen Spahn from New York, and Qiu Zhonghai, Chairman of Shanghai Qibao High School.

On the last night of the trip, Jorge Luis concluded his reflection with, "I'm going to miss all the friends I have gained ... see you in February, Dwight London!"

That's when students from all of our global campuses ¾ New York, London, Shanghai, Seoul, and Dwight Global Online School will convene in the Big Apple for our annual global concert at Carnegie Hall ¾ this year for the first time in the iconic Stern Auditorium. Students will celebrate Chancellor Stephen Spahn's 50 years of leadership, as they reach for the stars in "A Sky Full of Music" on February 13, 2018. Don't miss it!