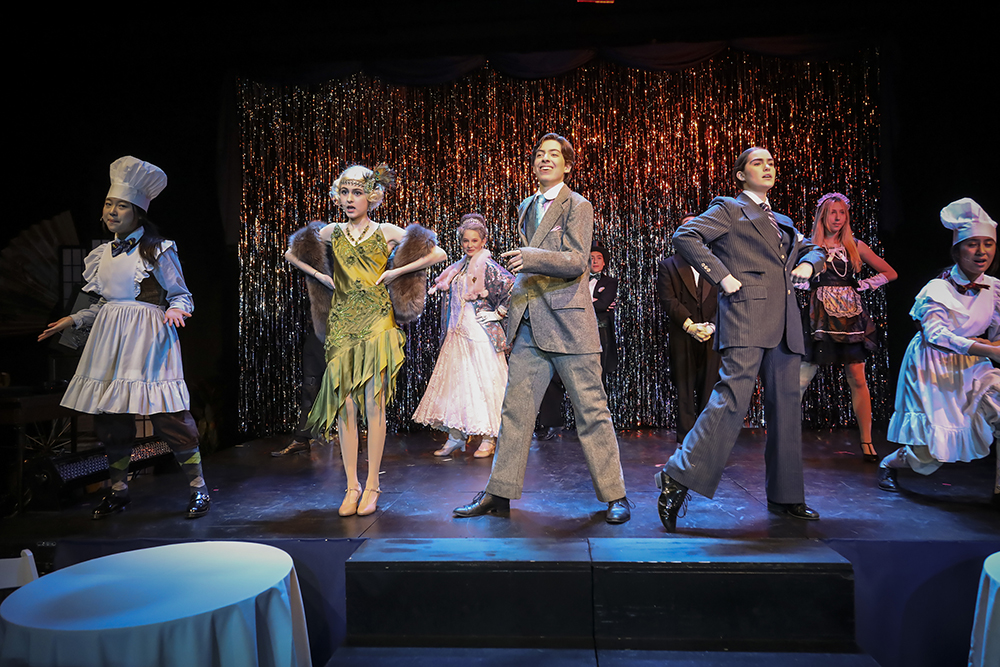 As people streamed into the Five Angels Theater, students dressed as waiters and waitresses greeted the audience, served up Playbills on trays, and echoed, “Welcome to the wedding of Robert and Janet!”

For those unfamiliar with the plot of The Drowsy Chaperone, a wedding is in the works — in fact, four weddings are in store. But the audience is not yet aware that more than one couple is to be married, as they take their seats at round cocktail tables with art-deco centerpieces, perfectly appointed for a wedding reception, circa 1928.

When the action begins, it’s closer to present day and we’re treated to an opening monologue by Man in Chair. Wearing a bathrobe, he’s sitting alone in his gloomy basement apartment strewn with treasured theatrical relics of days gone by. Despite declaring that he hates the theater, Man in Chair turns to his phonograph and begins to play the recording of his favorite fictional musical: The Drowsy Chaperone. When the needle meets the LP, the room comes alive with the show’s characters — flappers with bobs banded with ostrich feathers, fur stoles, and long loops of pearls; men in three-piece tweeds, knickers, newsboy hats, and boutonnieres. Servants in black tie. It’s the Roaring 20s!

During the 90-minute show, Man in Chair treats the audience to a running  — and mostly cynical  — commentary from the side of the stage about the glitzy musical and the “real,” less-than-glamorous lives of the actors who are unaware of his presence: gangsters, starlets, ditzy wannabes, tycoons, wealthy widows, a Latin lover — and one drowsy chaperone. Why is she drowsy? Because she drinks quite a bit and lounges dramatically on a settee wearing a bejeweled turban and exotic outfits. So much for Prohibition!

The Drowsy Chaperone takes us on a fun ride filled with mistaken identities and foiled plots. As one trip down the aisle is sabotaged, canceled, and reinstated, three other romances bloom. The show finds its happy ending, as four brides and grooms are married — and all fly off to their honeymoons in Rio. Featuring big song and dance numbers, including an impressive tap dance that starts out timid and ends triumphantly, the show puts a big smile on the face of Man in Chair and everyone in the audience.

A comedy. A musical. A parody of musical theater from that era. In his Director’s Notes, Terry Christgau, writes, “Someone called this a comedy with a musical inside of it. I love this phrase and all that it means, implies, and allows for. ... At the end of the show — and the show within the show — our Man in Chair, whether in his fantasy or reality, as it really doesn’t matter, does not fly away [as he does in previous Broadway productions]; rather, he realizes a life dream and joins the fictional cast for the finale. It is delightful, funny and perhaps to some, a little bit sad. But ultimately, it is endearing. We have shared great songs and characters and laughed together with you. We hope it’s memorable for you — in real life.”

Indeed it was! Bravo to the super-talented cast and crew!
The Drowsy Chaperone was the second Mainstage Theater production of the school year — and the 43rd that Mr. Christgau has directed and designed in his 21 years at Dwight. Head of Upper School Theater, he also spearheads Dwight’s Master Theater Program, which offers students dedicated to honing their craft intensive instruction. It’s a college-level program designed specifically for high school students, connecting them with members of the New York professional theater community to further their spark of genius.
Mr. Christgau tapped into the same spirit when conceiving The Drowsy Chaperone: “The production team was made up of real pros in choreography and set, lighting, and costume design, which has been my vision for theater at Dwight for years. Working with directors and designers of this caliber offers our students an invaluable learning experience. In addition, I was delighted that the Five Angels Theater, the first permanent home for the only professional theater company in New York City devoted to kids, embraced our concept and we could transform the black-box theater into a wedding reception.”

Congratulations to Mr. Christgau and to all the triple-threat performers — actors, dancers, and singers — who made The Drowsy Chaperone a smash success!