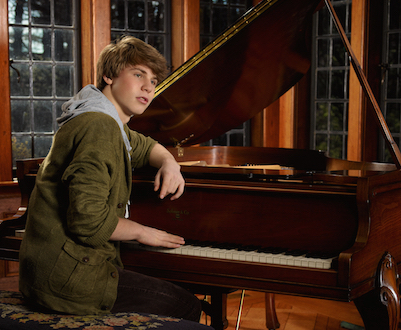 Senior Calvin Solomon, a talented composer, was commissioned to write a piece for our global Carnegie Hall concert, in keeping with this year's theme "Music of the Seasons."

Senior Calvin Solomon, a talented composer, was commissioned to write a piece for our global Carnegie Hall concert, in keeping with this year's theme "Music of the Seasons." With support from his mentor, Dwight's Music Director, Alistair Hamilton — and seven years of composing experience to draw from — Calvin wrote Winter Whispers, a classical piece for flute, clarinet, French horn, piano, and strings. The piece will debut on the Zankel Hall stage this Saturday evening and we all can't wait to hear it!

Winter Whispers will be performed by professional musicians, who also recorded the piece at Downtown Music Studios last weekend (see photo album). This is Calvin's sixth professionally recorded composition, which will be available on iTunes, Spotify, Amazon, and Google Play, along with his other pieces. Some of his work has been commissioned and performed by professional musicians at such venues as the Tenri Cultural Institute, Roulette, and Barge Music in Brooklyn.

Next up: Carnegie Hall!

"It's an honor, and truly humbling, for me to debut my piece in one of the most famous concert venues in the world," said Calvin, who will be attending Yale University this fall. "This event represents the coming to fruition, or culmination, of my passion — my spark of genius — for composing and hard work since I discovered it in sixth grade."

"Though I had studied the piano for eight years, I never discovered great talent for performance. However, when I started writing my own music, I learned that this was a wonderful way for me to express aspects of myself that I could not articulate with words, and that I could convey a range of emotions through music." Calvin began an apprenticeship at the Center for Educational Enrichment with composition teacher Justin Hines, who also teaches for the New York Philharmonic and the Carnegie Hall-Juilliard Academy Program.

The work paid off. Calvin has composed over a dozen instrumental pieces. But Calvin didn't stop there. For the past two years, he also pursued an independent study in composition with Dwight's Music Director. Mr. Hamilton and Calvin have focused on advanced concepts in music theory, including more complex chord progressions, advanced instrumentation, and the basics of conducting. "Though I don't anticipate becoming a conductor, I am learning to direct musicians to achieve my intended musical expression," explains Calvin. He continues, "When I bring an idea to Mr. Hamilton, he enables me to see it through a different lens, to re-evaluate, and to see it in a new light. Previously, my work was linear. With Mr. Hamilton, I explore ideas as they arise and don't worry about connecting them. That may come later. Mr. Hamilton's insights have elevated my work, which was previously minimalistic in style. Now I explore without limitations."

Calvin has also explored his technology talents at Dwight. Beginning with his tenth grade Personal Project, he developed OurDwight, an app to bring the latest news and schedule updates to the Dwight community. Calvin developed it further in Spark Tank, and last year was awarded a $2,500 college scholarship from The Dwight School Foundation for reaching the final launch stage. We're delighted that OurDwight is our official app — and will continue to be after Calvin graduates this June.

But first, the music calls.

Winter Whispers, which tends toward a movie score, fits the theme of our global concert. The title, according to Calvin, also fits a certain mood. "It is an emotional piece that reminds me of a quiet scene of snow falling." He says, "I am thrilled to hear my work come to life in the hands of musicians, to gain new insight into my music from their interpretation, and to watch an audience listen and react for the first time." We will be reacting with hearty rounds of applause, no doubt!