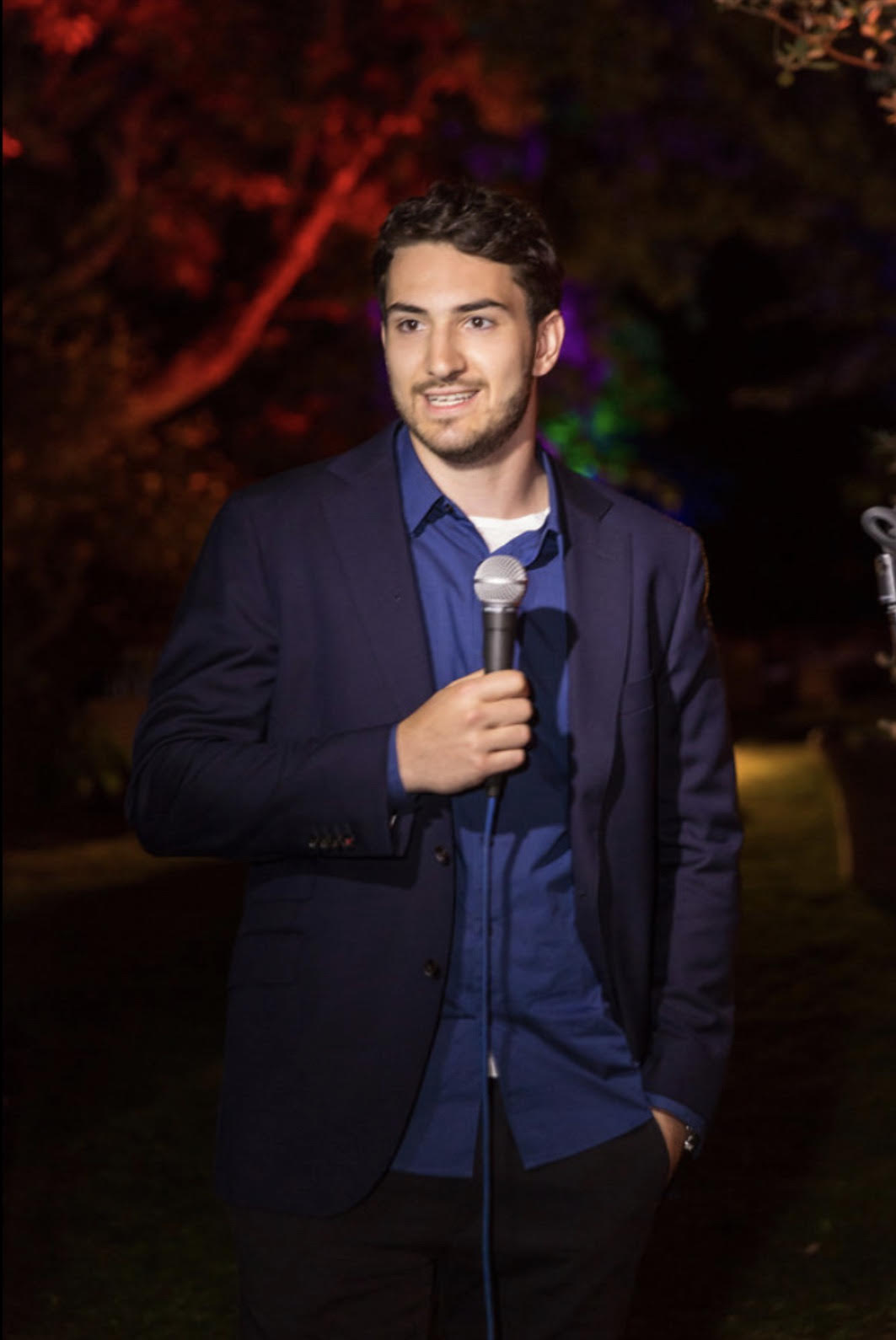 "Do this for your 25-year-old self," Josh Kigel, Director of Quest, implored Nick Shafir, when he was a teenager. "You're not doing this for you now, but for Nick at 25!"

What Nick was doing was working hard to succeed in school with dyslexia. When his motivation faltered, Josh encouraged Nick to see the bigger picture, the longer-term — the future. Thanks to Josh and Dwight's Quest Program, Nick's 25-year-old self would be reading and writing for a living — in fact, writing award-winning screenplays!

"This would not have been the case without Josh and all the other great Dwight teachers who supported me, pushed me, and gave me the tools to succeed," Nick shares. "I am very grateful to them."

A Personalized Path That Encouraged Creativity

In eighth grade, Nick transferred from the nearby Stephen Gaynor School. His family chose Dwight because of the great reputation our Quest Program has in New York City. Quest is designed to bring Dwight's promise of personalized learning to life for students with specific academic needs and to promote their success. Those needs may be: skill development, enrichment, English as an Alternate Language (EAL), or flexible learning to pursue exceptional talents.

"Quest was a great way for me to be part of a mainstream school. Josh mapped a program just for me and the rewards came when I worked hard ... but my Quest teachers sometimes worked harder than I did to keep me on track!"

Dwight faculty provided differentiation, as they do for all students based on individual learning styles, as no two students learn in exactly the same way.

"My English teacher, Laurel Aquadro, really helped me succeed in and beyond Dwight. She approached assignments from different creative angles and encouraged 'out-of-the-box thinking.' I was able to use my spark of genius in the arts to complete assignments in her classes and others. For example, when we read The Odyssey in Kate Schroeder's class, I wrote my paper as a rhyming poem rather than in narrative form. If there was a class in which I could make a movie, I did and I also made a video for my tenth grade Personal Project. It was great because the school encouraged ingenuity and helped me to gain confidence in my creative thought process, so that I was able to thrive at Dwight."

Nick's artistic spark of genius also included playing the bass in a student band called Montague Terrace, "convinced that it was our rocket ship to stardom!" he says. "We played original music, mostly written by Matt Allan '11, and the band was definitely a big part of my school life. We played at assemblies and I also played in a Dwight jazz ensemble, but I was more into rock." Nick's classmates were used to seeing him with bass in hand, along with long hair; hence, the 2011 yearbook prediction that saw Nick playing in a Van Halen cover band 30 years down the road!

Prior to entering Dwight, Nick participated in a summer program with Radomir Kovacevic, the Olympic judo champion and P.E. teacher, whose famous grueling workouts tested the mettle of many a student. "He was a special guy," Nick says of Radomir. "He had a big personality and he was a big factor in my early Dwight experience. To this day, I still think about him and the lessons I learned regarding how to carry myself. I had duck feet! No coddler, Radomir toughened me up and I began walking with a straight back. He was also full of love and it was a real treat to know him."

Chancellor Spahn, too, left a lasting impression for his intelligence and understanding, Nick explains. "He is one of those special people who listens to you and figures out what you need to succeed. He really supported me from the beginning, championing my development and giving me lots of ideas throughout high school."

Perhaps the most influential of all mentors was Josh Kigel. "I almost don't have the words to describe how much he did for me," Nick says. He doesn't have to because a picture is worth 1,000 words: There is a photo of the pair, teacher and student, captured during Nick's graduation that speaks volumes. "Josh is smiling and my own expression is a mix of excitement and disbelief that I made it," Nick shares. It's hard to know who was prouder that day — Nick or Josh! 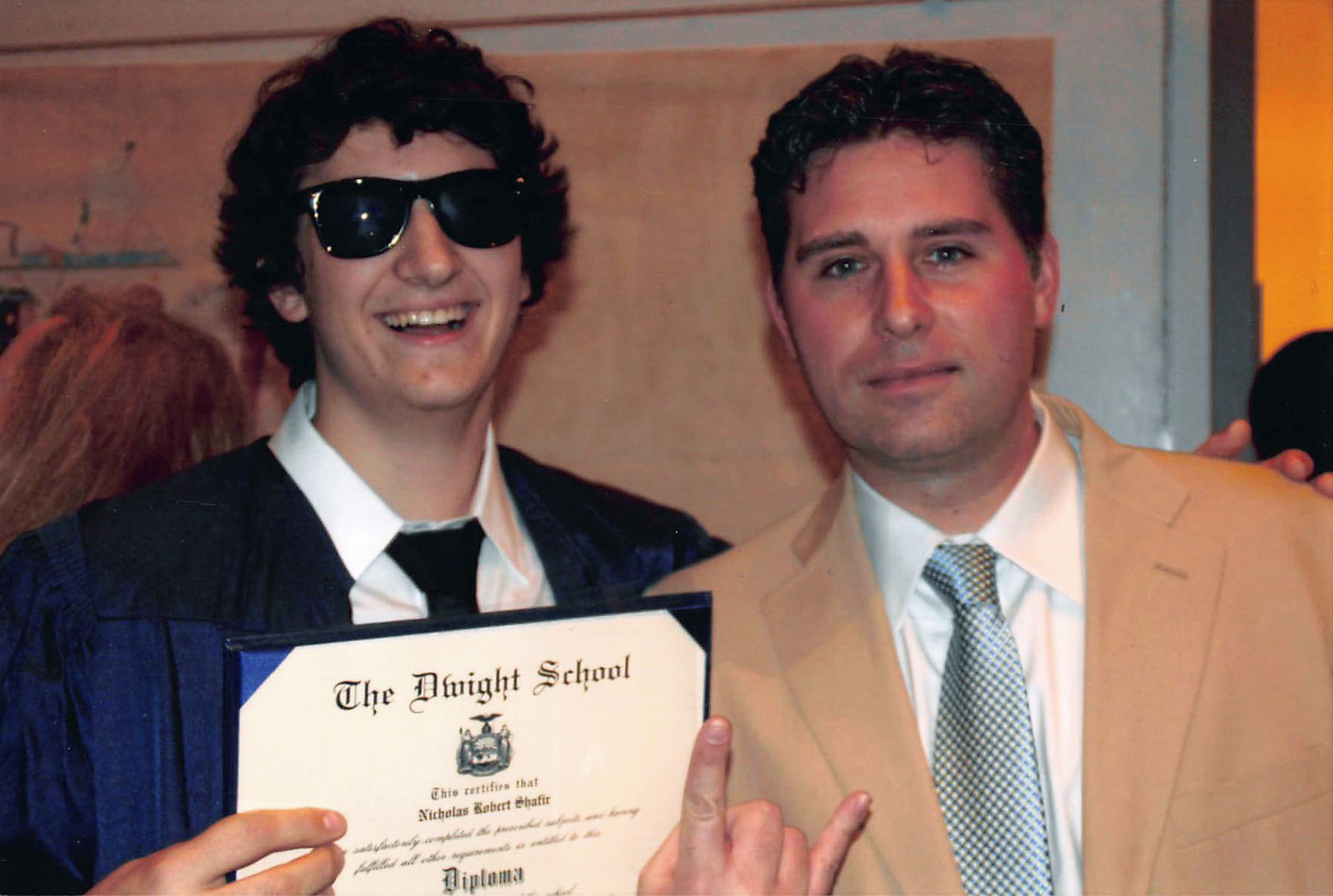 "Nick's story," says Josh, "captures the very best of what Dwight and Quest can do for a student who just needs a little more time and encouragement to unlock tremendous potential."

Nick's next chapter was written at Skidmore College. When he arrived in Saratoga Springs, NY, he felt a bit of culture shock, but drew on the strong foundation built at Dwight to succeed. Music continued to be a focus and Nick's major before he pivoted to American Studies, with some film theory courses along the way.

As a junior, Nick made a movie called "RIP Off." While not great cinema, it began a streak during which Nick was always writing — and signaled that he wanted to continue doing so.

During a semester at the Met Film School based in London's famed Ealing Studios, Nick developed a story for a short film and brought it to the screen. Entitled "Plenty of Fish in the Sea," the piece is about a teenage boy, based on himself, pursuing his crush with little success. While Nick also describes this film as not Oscar-worthy, together with "RIP Off" it opened the door for conversations with people in the industry.

After college, Nick worked on a small assignment for a successful Hollywood screenwriter named Bill Collage, which he parlayed into a full-time writing and research assistant position for over a year. "I eventually outlived my usefulness and found a summer internship in the writers' room of the TV series, 'Blue Bloods.' I shadowed the executive producer, wrote comprehensive summaries of recent seasons known as the 'series bible,' and had a first-hand look at the show's production. I learned a great deal in a short amount of time."

Additional work followed, including helping people prepare pitches and make trailers to sell their ideas — sizzle reels — all while Nick was writing his own horror movies and comedies. He had accepted that a magnum opus would not emerge from his first scripts. His ninth, called "Saving Grace," was the one to break through. It was chosen as a semifinalist among 140 others in the 2017 Academy Nicholl Fellowship screenwriting competition, which had 7,000 entries.

As some solicitations from agents and production companies trickled in, another producer at Assemble Media in New York City was willing to give him a shot. Provided with a skeleton of an idea, Nick was asked to develop and pitch his own version, which was then accepted. He was contracted to write his first motion picture! As is often the case, projects take time to percolate and Nick hopes that the feature film, which he calls his "crowning achievement," comes to fruition.

Meanwhile, "Saving Grace" continued to garner attention in 2018 as: the winner of the Best Original Screenplay for a Feature in the London Independent Film Awards; an official selection of the Beverly Hills Film Festival; and one of three finalists for the LA Indie Film Festival & Screenplay Competition. With contest feedback and input from industry professionals, Nick has refined the script and he hopes that the film will soon find a buyer.

"Saving Grace," as Nick describes it, is "an odd genre movie about facing one's demons and accepting death in a silly, scary way — a horror movie with some heart." Horror stories and comedies, he continues, "are set up formulaically. First, you learn all the rules ... and then you break them like jazz."

"Jaws," the industry-changing thriller that broke the rules in 1975, is Nick's hands-down favorite film. "It's a monster movie in which the monster is not truly seen until the end — a concept that we're familiar with today, but was revolutionary and terrifying in its day," Nick explains. "'Jaws' is inspiration for my own work and I see something new every time I watch it."

Now that his career has really taken off — at the age of 25 — Nick is writing his own success story. As the protagonist, he declares triumphantly, "I waited a long time to tell my teachers at Dwight that I'm getting paid to write!" 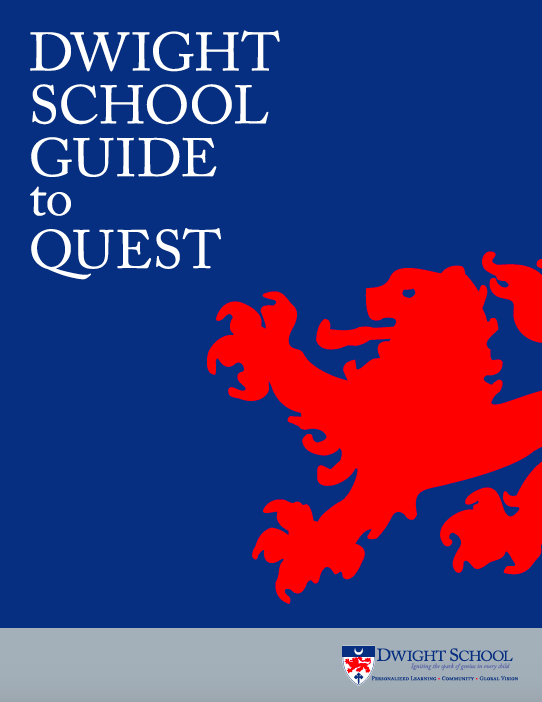