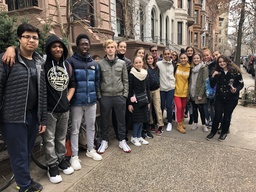 And….. They’re back! Dwight Global students recently spent time on campus in New York for Dwight Global’s Annual STEAM (Science, Technology, Engineering, the Arts and Mathematics) Weekend.  Students came from near and far to participate in the event, which focused this year on forensic science, design, and immigration. The STEAM weekend is just one program Dwight Global hosts to bring its online students together in the real world.

The weekend included a number of enriching activities designed to create community among students as well as to challenge them academically.  Students were given the task of solving a fictional mystery occurring at the school. As a part of their detective work, they conducted witness interviews (with faculty members and students answering “in character” and playing a role), performed psychological analyses, and did forensic laboratory testing on evidence found at the “scene of the crime.”  Evidence included fingerprints, clothing fibers, and a handwritten note. Ms. Lezlie Carroll, Dwight Global’s science teacher, said, “It was absolutely fantastic to spend time and build relationships with our amazing students and staff.  As a science teacher, I loved seeing the students examine evidence related to fingerprint, document, and fiber forensics in the lab, as they showed off their skills with Bunsen burners, forceps, and microscopes - awesome!”

Students also enjoyed history teacher Travis Hughes’s lessons about immigration in New York City as well as an in depth look at the famous Sacco and Vanzetti case.  The immigration experience was brought into focus with a visit to the Tenement Museum in downtown Manhattan. Students were able to tour a recreated apartment and see how life would have been for newly arrived European immigrants at the turn of the 20th Century.  Students also bonded through a team building activity at Exit Escape Room, and shared a real New York-style meal at John’s Pizza. They even spent an evening at a Broadway show, The Prom, followed by an exciting walk through the lights and sounds of Times Square.

Dwight Global stands out among other online schools for its focus on community, which can be lacking in other online environments.  Our students have deans, participate in real-time, virtual classes, take leadership positions in clubs and houses, and meet on our New York City campus for events like the STEAM weekend.

A private school like no other, Dwight Global blends online, on-campus, and residential learning experiences, allowing students to pursue a program personalized for them in Grades 7-12.   Dwight Global is part of the Dwight Schools network, which was founded in 1872 and has grown to include five physical campuses, including New York, London, Shanghai, Seoul, and Dubai.