Each year, Dwight brings students together from its global campuses to perform at Carnegie Hall.

<<Back to Residential Programs, Exchanges, and Trips 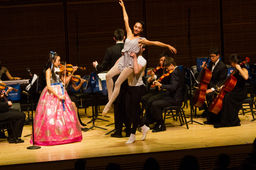 Feet were tapping, hands were clapping, and smiles were a mile wide! And when the last note was played, the audience was on its feet applauding the 221 Dwight students ― including some from Dwight's Open World School ― who performed on the illustrious Carnegie Hall stage in our 2016 global concert entitled "Music for Dance."

Students enrolled in Dwight's Open World School, which offers high school IB and AP classes online, joined students from our New York campus as well as those from Dwight campuses in London, Seoul, and Shanghai. Some of the Open World School students traveled from Los Angeles with their cohorts from the ICL Academy for Film and Performing Arts to share their sparks of genius. This year's concert featured the largest number of performers in the history of this annual Dwight tradition, which began well over a decade ago.

An ambitious program that united the two closest art forms, music and dance, the concert was a stunning success that involved students spanning grades 4-12. Musicians and singers were paired with dancers – including five dancers from Dwight's Open World School ― to perform a wide repertoire, from classical to jazz, and from Chinese traditional folk music to pop. It was only in the week before the concert that they all gathered in New York to rehearse as one. With the support of their music and dance directors, and the Director of Dwight Open World School ― not to mention an amazing amount of talent ― the students performed together seamlessly.

It was not all work and no play; students had time to forge friendships in between concert preparations. This was especially exciting for the Dwight Open World Students, many of whom met for the first time in person after getting to know one another through online classes.

Anna Greenberg, who is a freshman studying at the Joffrey Ballet School, shared, "It was so great to meet a student in my French class who lives in LA! She attends the ICL Academy and while we've 'seen' each other online, connecting in person was awesome ― and performing in the same concert was even more amazing!"

Students described their experience in this video.

According to Jaya Bhavnani, Director of Dwight's Open World School, this is one reason why the Dwight online program is special. "We welcome online and blended learning students to the Dwight community, invite them to participate in activities and events, and encourage them to make personal connections. We couldn't be more delighted to offer students unprecedented opportunities like performing at Carnegie Hall. These experiences stand alongside the individual academic attention we provide ― which is what Dwight is known for ― and the flexibility students need to pursue their sparks of genius."

We can't wait for next year's concert!