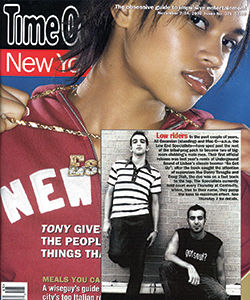 A catalyst behind The Tonight Show, Access Hollywood, and Jay Leno, a former DJ at some of the hottest clubs, and a producer of several number one hits for top artists. Think you're busy? Mac Clark '98 seems to only know fifth gear. Now the Director of Strategic Media Initiatives at NBC Universal, Clark didn't go to college after graduating from Dwight. In fact, he started working his senior year of high school at the investment bank ING Barings U.S Financial Services and continued after graduation. Without a college degree, his high school education was even more important in preparing him to successfully negotiate the corporate landscape. After the events of 9/11, Clark, who lived only five blocks from the World Trade Center, decided to pursue his true passion – music – full time. "The courage to step forward into the unknown was a product of the many hours of training and teaching I received while under the tutelage of Radomir," Clark says. [Radomir Kovacevic was a former faculty member at Dwight who passed away in 2006.]

Clark met his partner, Ali Geramian, in 1999, and by 2001 they burst onto the New York DJ and producer scene with their company, The Low End Specialists. In the summer of 2002, Mac and Ali accepted their first major New York City residency at the popular Centro-Fly nightclub (now closed), home to legendary DJs like Erick Morillo,Roger Sanchez, and The Chemical Brothers. This residency brought them worldwide acclaim and enormous support from industry heavyweights and clubbers, establishing The Low End Specialists as one of the hottest names in the global house scene. From 1999 until 2006, Clark and Geramian wrote and produced remixes for pop stars such as Janet Jackson, Puff Daddy, The Gorillaz, Stacie Orrico, Nikka Costa, Dirty Vegas, and N.E.R.D. They toured over 365 cities in 60 countries performing anywhere from two to four days per week.

Things never really slowed, but in early 2006, Clark decided to pursue other opportunities. He joined NBC Universal's Television Stations Division, leading the operations of its 26 owned and operated NBC and Telemundo stations. Mac was involved in the Media General divesture which oversaw NBC sell and transition four owned and operated television stations (each ranked among the top three in their respective markets) for $600 million to Media General, an NBCU affiliate. Clark was then promoted to an expanded role within the newly created Local Media Division, where he continued to be involved in the day-to-day operations of the owned and operated stations while planning and delivering on various initiatives which reduced operational cost and drove business growth.

In May 2008, Clark was promoted again but this time relocated to Los Angeles to oversee Strategic Media Initiatives within the companies TV Network & Media Works division. In this role, he partnered closely with the West Coast Entertainment and Operations group in the construction and delivery of a new $50 million Stage One facility at Universal Studios, CA. This facility now hosts The Tonight Show with Conan O'Brien. With the successful launch of the new Tonight Show, Clark began the initial planning phases to move Access Hollywood to a new high definition show. Simultaneously, he tackled the relocation, construction, and preparation for Jay Leno's new show located at Stage Eleven on the Burbank lot.

Who knows what 2010 will bring? For now, Clark remains heavily involved with the Media initiative, working to drive new revenue opportunities via digital media distribution throughout the United States and overseas. To get through all of his challenges Clark says, "I rely on Radomir's lessons to get through life successfully. I consider Radomir to have been one of the largest influences of my teenage and adult years."