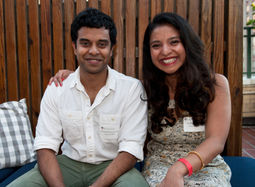 Abhishek Bhattacharjee '01: Building Brain-Machine Interfaces to Advance Our Understanding of the Brain
Jan 23 2017

Though new to the U.S. when he arrived on campus as a junior, Abishek Bhattacharjee '01 wasn't new to international schools. He and his sister, Meghna '05 (pictured here), had attended schools for families of diplomats while they lived in Italy and Malta. What proved to be different about Dwight for Abhishek were his classmates, who had a wider range of backgrounds; the IB curriculum; and most especially, the faculty.

"You could question the teachers at Dwight," reports Abhishek, for whom questioning — with more than a healthy dose of skepticism — is part of life and work. "The school environment was different from anything I had experienced anywhere else. It kept you on your toes and it kept teachers on theirs. Asking questions and finding answers through inquiry were key to a Dwight education, requiring students to research their positions, support them with hard evidence, and form watertight arguments to defend them."

These skills have certainly served Abhishek well ever since.

"Skepticism is a good thing," explains Abhishek, Associate Professor of Computer Science at Rutgers University. "We live in an age when we are provided with a great deal of information — much of which is manicured without context. We need to look at all of it, consider and think hard, and consciously choose what we want to adopt or accept."

Abhishek recalls that his Dwight teachers were open to skepticism, which he appreciated, along with the wider range of subjects the IB offered compared to the AP curriculum. He always had a significant interest in the sciences and math; at Dwight, he added the humanities, thanks to Arthur Samuels, who is especially memorable for the high-octane way he taught history; and English teacher Jennifer Bishop, who took a unique interest in Abhishek's work in classrooms beyond her own. Teachers like David Anstey and Barry Gragg were also instrumental in cultivating his wider interests in applying science and mathematics to broader real-world problems outside the abstractions of the classroom setting.

"Dwight played a central role in my formative years in the U.S.," reminisces Abhishek. "Having spent my childhood studying in Asia and Europe, the American system of education was new and so was the college admissions process. Dwight provided the financial support to get me through two crucial years before college and gave me a solid launching pad to set myself up in the upper-level educational system in the U.S. The supportive environment created by the faculty, students, and of course Chancellor Spahn, influenced my decision to continue my studies here rather than return to India after high school."

Abhishek continues, "Mr. Sphan influenced not just my education, but also my career. He has always taken an active interest in my work and we keep in touch regularly."

Chancellor Spahn had identified McGill University as a potentially excellent match for Abhishek's academic interests and desire for a first-rate college education in balance with the economics of pursuing an undergraduate degree. As it turned out, McGill was where Abhishek headed after graduation. He majored in electrical engineering, which offered rigorous training in a wide range of subjects, from applied physics to applied math and everything in between (computer systems design, analog and digital circuit design, signal processing theory, information theory, etc.).

"At McGill, I thoroughly enjoyed my peer group of talented engineering students, who had a big impact on the path I have pursued ever since," shares Abhishek, who received McGill's British Association Medal for Great Distinction for graduating at the top of his class in the Department of Electrical, Computer, and Software Engineering. A PhD in Electrical Engineering from Princeton followed, as did Abhishek's record of outstanding performance: He received Princeton's Department of Engineering and Applied Sciences' Wu Prize for Academic Excellence.

A Calling for Academia

Immediately upon the heels of completing his PhD, Abhishek became an assistant professor in the Computer Science department at Rutgers — at the age of just 26 — making him the youngest tenured track assistant professor in the department at the time. "I always knew that I wanted to be a professor. Not all jobs embrace skepticism and painstaking decision-making as a virtue and not a vice," he explains. "The single biggest thing I relate to my PhD advisees is the importance and value of skepticism in science."

Abhishek's own scientific research focuses on building and using high-performance, energy-efficient computer systems for datacenters, mobile devices, and emerging brain-machine interfaces as tools for computation. He is especially interested in the role that computation can play in improving quality of life. Take, for example, brain-machine interfaces, which can help neuroscientists in their quest to understand the brain — one of the biggest medical challenges we face today.

Abhishek explains, "Science has conquered many infectious diseases through vaccinations; we have developed anesthetics and antisepsis protocols to enable invasive surgeries; antibiotics and antivirals have enabled new eras in fighting communicable diseases; and we even have improvements in things like organ transplantations and oncology work to battle cancers. The next big frontier is the brain and countering psychiatric and neurological conditions, cognitive impairments, and so on. By mapping, monitoring, stimulating, and treating neural pathologies, we can improve the quality of life for people suffering from these debilitating problems today."

Abhishek's work in this area includes working on computer processors — both at the hardware and system software level — to improve brain-machine interfaces. In 2017, he is a visiting scholar and pursuing research at the Princeton Neuroscience Institute through a CV Starr Visiting Fellowship. Spending a year at Princeton will bring Abhishek back to yet another academic community in which he forged strong bonds, continuing a theme — and an invisible thread — that first began during his days at Dwight.