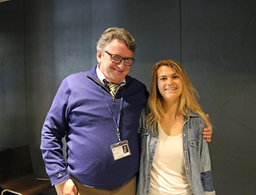 “I was not funny in high school,” admits Alex DaSilva ‘12. This is a bit hard to believe because today Alex is an accomplished improvisational performer, who is making people laugh everywhere she goes as a member of the four-woman improv troupe called Jane Don’t.

At Dwight, Alex was a talented actress and singer, playing lead roles in Pippin, The Way, The Bald Soprano, and most notably in Legally Blonde as Elle. She was an IB Diploma Program theater student, who took her spark of genius seriously. “At that time, I was not a good improviser,” she says. “I wasn’t comfortable in that zone and it was Terry Christgau, who suggested that I take an improv class during the summer after I graduated.”

“I recommended the class to Alex because I knew that if she strengthened that muscle, she would become an even better performer,” explains Mr. Christgau, Head of Upper School Theater and the Master Theater Program.

That suggestion was prescient because Alex loved the class at the Magnet Theater’s comedy and improvisational school. After only two months, she auditioned for her college improv team when she landed at USC as a freshman. During the next four years, Alex performed with them and took classes at the Groundlings School, the Upright Citizens Brigade, iO West, and the Pack Theater, where she also became a member of their house team. Many a famous career has been launched from just one of these rich training grounds!

We asked Alex what she loves about improv.

Lots of things! “It’s all about exploring the human experience and finding the funny and weird in everyday life. In improv, you’re the actor, writer, and director of every scene – it’s art in one of its truest forms because you are creating everything in the moment,” she says. Taking risks and trial and error are celebrated in this art form, which ultimately “kicks worrying about yourself out of you. I also love making people laugh.” This last part, Alex reports, is the source of many jokes with her best friend from Dwight because … did we say that she wasn’t funny in high school?!

Over the last five years, Alex stayed in touch with Mr. Christgau and when he wanted to revitalize improv on campus, he knew that Alex was the one for the job. “I was humbled that he asked me to lead the after-school program. It’s great to be back at Dwight and to see that today’s students have a dedicated theater space, which I would have loved!”

Dwight’s improv group has grown under Alex’s direction, as more students joined each week. She is teaching participants the same early exercises she learned and enjoyed so much. “We’re focusing on fundamentals and seeing students listening to each other and creating a world out of nothing. In just the first four or five weeks, I have already seen such a difference. The students are becoming freer and taking more risks. Their progress is great!”

“Over the years, I have stayed in touch with theater alumni and watched the growth of their careers,” says Mr. Christgau, now in his 21st year at Dwight. “One of the most rewarding things for a teacher is to have a former student like Alex come back and work with a new generation of students. It completes the circle.”