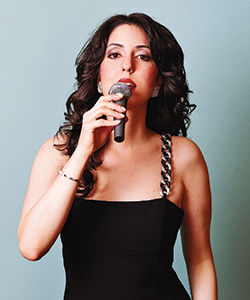 Pamela Luss (known to Dwight alumni as Pam Kanter) is widely regarded as one of the best-known younger singers of Contemporary jazz and The Great American Songbook, as well as outstanding pop songs of the last 40 years, from John Lennon to Brenda Russell. She has released three well-received albums on the High Note /Savant label – There's Something About You I Don't Know (2006), Your Eyes (2007), and the most recent, Magnet (June 2008). Her biggest performance thus far occurred on Labor Day 2007, when she appeared in front of several million viewers, singing "Over The Rainbow" on the annual Jerry Lewis MDA Telethon. (This clip has also gathered thousands of views on YouTube.com.) She has made multiple appearances at all of the major jazz and cabaret rooms across New York City, including Birdland, Dizzy's Club Coca Cola (the night club of Jazz at Lincoln Center), Feinstein's at The Regency, The Iridium, and many other restaurants and clubs. She has also appeared in concert at Weill Recital Hall at Carnegie Hall, and as an illustration of her musical diversity, in the fall of 2007 she became one of the few performers to sing both at the Jazz Improv Convention and The Mabel Mercer Foundation Cabaret Convention at Frederick Rose Hall at Jazz at Lincoln Center.

Blessed with a beautiful voice, remarkable timing, and sumptuous intonation, Pamela has an approach to a song that is both traditional and contemporary. She sings classic standards, swinging jazz, and worthwhile tunes from some of the unexplored corners of the Great American Songbook in a fresh and original way. Her music covers a wide range of stylistic ground, from traditional ballads to pop hits to Latin bossa novas and the blues, in interpretations that can be either catchy and finger-snapping or slow, romantic, and tender - and everything in between.

As the actor Jerry Stiller put it, "You're in great company: Billie, Ella, and Helen Humes. They all had soul and so do you. Thank you for changing my universe when you sing." Syndicated columnist Ric Bang wrote recently, "Luss is much more than a mere 'singer'; she's a primo vocalist and a stand-out with groups of any size. Her voice is mellow and excellent, her phrasing exquisite. Longtime music fans, who miss hearing those great vocalists of years past, need not despair; this lady more than fills the need for such music." Pamela's latest album "Magnet" was described as "sublime" by Jazz Times Magazine and "mesmerizing" by All About Jazz. Showbiz legend Jerry Lewis expressed it most succinctly when he called Pamela "a wonderful singer!"

When asked about her experiences at Dwight, Pamela responded, "My years at The Dwight School have been much on my mind lately. Thanks to Facebook, MySpace, and other marvels of the Internet, I have been able to renew friendships from Dwight that were lost along the way; and that has been so much fun. Of course, there were friendships that began at Dwight that I didn't need to renew because they've continued uninterrupted since high school." She continues, "Dwight was special as a result of Mr. Spahn's respect for each student and his or her individual needs and talents. Mr. Spahn showed an interest in our unique strengths, allowing each of us to develop personal goals while tackling challenging subjects. There was a family atmosphere at Dwight as a result of Mr. Spahn's support, especially during times when a student might be experiencing difficulties of any kind. I am very pleased to have had the opportunity to write this and say thank you."

To see Pamela's schedule of performances, purchasing info on her albums, and additional information, visit www.pamelaluss.com.