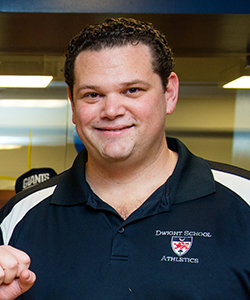 Dwight alumnus and basketball superstar, David Brown '97, was recently featured on CNN for his work with Basketball Stars of New York, a program he started that helps kids develop their basketball talent. An all-star basketball player at Dwight, David went on to play in college as well as coach at both the high school and college levels. After a corporate career with the New Jersey Nets, David decided to create his own business where he could combine his love of basketball and working with kids. He saw a great opportunity and a niche market he could fill by providing professional-level instruction to kids who needed to hone their skills on the court. Basketball Stars of New York only employs former basketball players and athletes in an effort to keep the company as authentic as possible. He credits his time at Dwight for inspiring this business model and keeping the focus on the kids.

David also credits Dwight and his former Dwight coaches for fostering his passion for basketball. He cites legendary faculty member Radomir Kovacevic as an inspiration and part of the reason he wanted to work with kids. When asked about Radomir, David says "He taught me to do things the right way and how to lead other people. [This] allowed me to be a leader on the basketball team and prepared me for basketball in college. If I hadn't had him as a coach, I would never be doing what I am doing right now." David says his chance to work with Coach Pee Wee Kirkland and Chancellor Spahn also paved the way for his current career. Reflecting on how his Dwight experience impacts his current coaching style, David looks back fondly at the practices and time spent with friends, not necessarily the games won. "We won almost every game ... [but] the chemistry and camaraderie is what you always want to strive for in a team." It is that conviction that he ultimately tries to instill in his students and his coaches at Basketball Stars of New York. Ever ambitious, David plans to increase the scope of his company and hopes to eventually run international camps at Dwight's four campuses abroad (London, Vancouver Island, Beijing, and Seoul – see Feature Story on page 34) to "give kids the chance to learn skills from coaches in America, which is the heartland of basketball." We have no doubt that he will do just that!