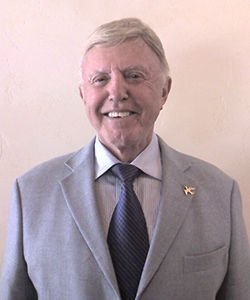 As John F. Kennedy said, "The problems of the world cannot possibly be solved by skeptics or cynics whose horizons are limited by the obvious realities. We need men who can dream of things that never were." Richard C. Goodwin '46 is just such a man. He dares to challenge skeptics and cynics with his message that peace in the Middle East is not only possible, it's inevitable. No matter the criticism, no matter how daunting the task, no matter the cost, nothing is impossible in the world of Goodwin. When it comes to peace in the Middle East, not just between Israelis and the Palestinians but with the twenty-two nations of the Arab League, Goodwin has directed the full force of his philanthropic efforts toward peace.

"Many countries have war departments and defense departments. You don't hear much about peace departments. Peace is much more difficult than war," says Goodwin. So with characteristic determination, he rolled up his sleeves and established his own department of peace, the Middle East Peace Dialogue Network, Inc. (www.mepdn.org) to promote dialogue, tolerance, and co-existence between Christians, Muslims, and Jews and to work tirelessly toward the two-state solution. While he has supported more than seventy-five peace and reconciliation organizations, activities, and programs to further this goal, his crowning achievement to date has been to underwrite a comprehensive Regional Middle East Peace Plan (www.geneva-accord.org) that addresses each key issue of contention between the Israelis and the Palestinians. It is a viable road map, a credible point of departure for negotiations among all nations desiring peace in the region. In May 2009, Israeli President Shimon Peres met with Goodwin, thanking him for his devotion to peace.

However, before embarking upon his full time commitment to peace in the Middle East, Goodwin was a struggling student at The Dwight School. He remembers a stern and intimidating English teacher in eleventh grade that recognized his reading difficulties. He thought he could help him improve by giving him an 800-page book to read about the life of Queen Elizabeth in the 18th century—but only one page per night! He became so engrossed in the book that he couldn't stop at only one page. His improved reading skills reflected in all his work, bringing him new friends and acceptance among his peers. Goodwin attributes this teacher's personal interest to preparing him for his eventual acceptance at Drexel University, from which he graduated with a B.S. in Commerce and Engineering in 1948.

Goodwin's career achievements and philanthropic commitments are many. In the 1950s he began his home building career, constructing single-family homes in southern New Jersey. In the early 1960s, Goodwin Enterprises, a partnership between Goodwin and his father, expanded into land development, sewer and water treatment facilities and local shopping centers. In 1960, Goodwin and his father broke ground on Ramblewood on the Green, a single family home project built adjacent to Ramblewood Country Club, which expanded over the years to include apartments, townhouses and condominiums.

While his real estate career brought great success, Goodwin's philanthropic work has brought great satisfaction as a "second career." He is a "Million Dollar Roundtable" volunteer fundraiser for the United Way of Burlington County, New Jersey.

He is the founder of the Goodwin Holocaust Museum of Delaware Valley, and the Goodwin Holocaust Education Center in Cherry Hill, New Jersey, and a founder of the National Liberty Museum in Philadelphia. He is the benefactor of the Richard C. Goodwin College of Professional Studies at Drexel University, from which he received an Honorary Doctorate of Human Letters. Goodwin also serves on the Board of the American Friends of Neve Shalom/Wahat al-Salam and on the Advisory council of J Street. He and his son, John, have raised more than $1 million for prostate cancer research, and he is the benefactor the Richard C. Goodwin Daycare Center at the Maasai Heritage Preservation Foundation in Kenya, Africa.

A proud father of a daughter and two sons and grandfather of three, he resides in Snowmass, Colorado. At the age of 82 years young, he still relishes skiing the Snowmass Mountain.