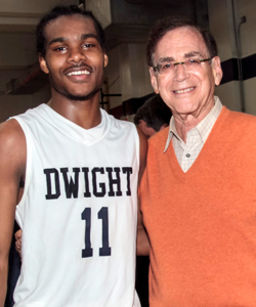 This is a story that has come full circle. It began when legendary Harlem street basketball player Pee Wee Kirkland, who had walked away from his 1969 NBA draft with the Chicago Bulls and into a life of crime, turned over a new leaf.

The year was 1997. Mr. Kirkland, who had served time in prison, had a fresh start. He embraced the opportunity to help troubled kids overcome challenges and strive for success through a Nike-sponsored "School of Skillz" Program, which is now a nationwide campaign. Though he never envisioned coaching, it made great sense that Mr. Kirkland would end up back on center court, where his skills were razor-sharp and his passion for the game undiminished.

That coaching job was at Dwight, where the boys Varsity basketball team embarked on a phenomenal winning streak that took them all the way to the New York State Association of Independent Schools tournament, where they triumphed and brought home the trophy ? two years in a row.

One of the players on that championship team was Dave Brown '97, coach of today's Dwight team. Last year, he returned to his alma mater and to our new 40,000-square-foot Athletic Center to lead the next generation of players, including Pee Wee Kirkland, Jr. '14. In addition to inheriting his father's name, Pee Wee Jr. inherited his father's athletic talent.

Just as great stories have great dramatic arcs, so does this one. During Dave Brown's first year as coach — with Pee Wee Kirkland, Jr. as point guard running offense — the Dwight boys Varsity basketball team won the State Association of Independent Schools tournament.

This is also a story that will stand the test of time. It has garnered the attention of PIX 11 and can be seen here.

Read more about Dwight's athletic program, when Pee Wee Kirkland worked alongside another legend — the late three-time Olympian Radomir Kovacevic — which captured the attention of Sports Illustrated in 1998, by clicking here.

For a look inside the home of our proud Dwight Lions, check out our Athletic Center video here.