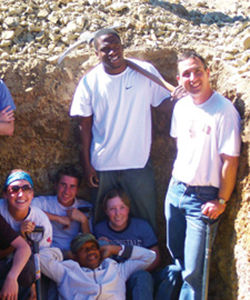 "When I came to Dwight in seventh grade, the school offered me an opportunity to flourish, to succeed — and to start down the road to become who I would ultimately become," explains Scott Rosenberg '85. Who he would become is Professor of African History at Wittenberg University. Participating in the Peace Corps would also turn out to be a life-shaping experience, from which Scott emerged as a steadfast champion of the people of Lesotho, a small country surrounded by South Africa on all sides.

"Chancellor Spahn took me under his wing and encouraged me to try new things and follow my passions," Scott says. "I have specific memories of him and of the school supporting and empowering me. It was the right environment for me. For example, I loved history. While Dwight did not offer AP American History, my history teacher, Will Gooden nurtured that pursuit and arranged for me to take the exam at the church next door. Another example is when Coach Hank Cadra pushed me and my peers to be better people. I was not a very good basketball player, but I tried and tried. He knew how much I enjoyed history and one day, he asked me to tutor a teammate in history during practice. While we were in the library, Coach told the team: "If you all work half as hard as Scott does on the court, the team would be champions.' I'll never forget that."

Following Dwight, Scott also flourished in college at Kenyon, where he double majored in history and sociology. "Sociology opened my mind to issues of global poverty and global inequality," he shares. At the same time, "I knew that the Peace Corps was out there and something that I wanted to do. When an African historian joined the faculty, I fell in love with Africa. It was an inspiring year in which we learned about apartheid and became advocates, fighting against the tide by sleeping on the college lawn until Kenyon divested itself of companies with holdings in South Africa a week later. At Kenyon, I was with like-minded peers who were interested in seeking global change and it was all very exciting."

A Home Away from Home

By the time he was a senior, Scott had discovered a part of the world that would become his home away from home: Africa; his senior thesis on apartheid as a system of economic discrimination (in addition to racial discrimination) was his passport there through the Peace Corps. Three weeks after graduation, Scott was on a plane to Lesotho, where he would spend the next 27 months farming in a rural co-op with no electricity or running water trying to grow vegetables and sell them. "I became a good farmer and interested in sustainability," Scott recalls. "I love agriculture as a result of this experience."

The first night in Lesotho, as Scott watched the sun come up, he re-read one of his favorite books, Walden. In this classic chronicle of immersion in nature, Thoreau writes, "life is but a morning star." ... Amazingly, "The name of the village I was assigned to was called Morning Star," Scott recounts. "I knew it was the place to be."

No one spoke English in Morning Star and it took nine months for Scott to become comfortable getting by, but it didn't take long for him to become enamored of the people of this remote village. It soon became the nexus around which much of his life would revolve for years to come. "I began to care profoundly for the country and its people who have a deep sense of pride. I developed a passion for them and for their welfare."

When Scott returned to the U.S., it was with a Peace Corps fellow scholarship in hand to Ohio University, where he earned a Masters in International Affairs and African Studies, followed by a PhD in African History at Indiana University. He received a Fulbright-Hays Doctoral Dissertation Award to return to Africa and write his thesis on Lesotho's national identity, specifically, how such a poor landlocked country can have a legacy of such deep and enduring pride.

A few years later, Scott landed at Wittenberg University in Ohio, where he has served as Professor of African History for the last 16 years and became Chair of the Peace Corps Prep Program (the second in the U.S.) five years ago. "Over time, I have taught a number of students who were a lot like I was: passionate and open to exploring the world. I hope that I offer them what Dwight and Kenyon provided me — encouragement and mentorship." No doubt, he has.

Scott has certainly engendered in his students an interest in making a difference in the world. Since 2003, he has led annual service learning trips to Lesotho for almost 400 Wittenberg students. Together, they have tackled projects designed to help the youngest residents of one of the 30 poorest countries in world with the second highest HIV rate: orphans, HIV-positive, and vulnerable children. During their month-long visits, they have built houses through Habitats for Humanity, repaired rooves, and planted gardens. So, too, have they equipped schools without books, chalkboards, or even chalk with bright educational paintings of shapes, letters, numbers, equations, maps, the life cycle of the butterfly, and more — fundamental learning tools that are both sorely needed and beautiful — and now built into the schools' permanent structure.

"When I began these service trips to Lesotho, I took 22 students with me to dig latrines and I thought it would be great to take students every four years or so to tackle other such needed projects. But the following year, 40 students volunteered and by 2011, almost 10% of the student body had applied to go on a service trip. I had to turn down half of the applicants due to capacity!"

The volunteer work has continued every year but Scott is compelled to speed up efforts today due to a dire situation: Lesotho is suffering its worst drought in 100 years and 25% of families are unable to meet survival needs due to food insecurity; this figure is expected to jump to 50% by June.

Scott is working on an urgent humanitarian project to provide food and nutritional supplements to 3,000 orphans under the age of 5 suffering from severe malnutrition and stunting, which causes long-term cognitive and physical impairments — and threatens the well-being of an entire generation. Scott is hoping that he and others dedicated to the cause can provide enough pre-packed meals of food supplemented with 21 vitamins to stave off the potentially devastating consequences of drought. They are hard at work raising awareness and money for the effort, and packing meals through the non-profit Pack Away Hunger organization in Indianapolis. These lifeline meals are being sent to Lesotho by the World Food Program and distributed on the ground by the non-profit organization Touching Tiny Lives. To support this time-sensitive effort, please contact Scott Rosenberg.

Scott, who has dedicated his time and energies to raising funds and resources to subsidize this and other projects designed to improve the quality of life in Southern Africa, has served as President of the Friends of Lesotho, an NGO, for the last five years. More recently, he was named Honorary Consul for the Kingdom of Lesotho — a well-earned, and indeed, distinguished role for a man who has devoted so much of his life to the tiny country that captured his giant heart.