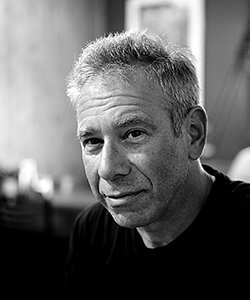 In the November 2, 2009 issue of Time magazine, actress Julia Louis-Dreyfus mentioned Daub as one of her favorite artists; "....a watercolorist in the Winslow Homer tradition. His work is meaningful, elegant and careful." Matthew Daub '69 is a nationally known artist and educator. His watercolors have been included in over one hundred and fifty juried and invitational exhibitions in institutions such as The Metropolitan Museum of Art and The American Academy of Arts and Letters. Now a successful artist and art professor, the path that Matthew Daub '69 took from Dwight to the New York gallery world was a circuitous one.

Although he was a prodigious drawer as a child, often times filling his school notebooks during class time, Daub never thought much about a career as a professional artist. After graduating from Dwight, he attended Pratt Institute but dropped out after only three semesters. "I should have been more focused as a young student, but I had other priorities in those days. I think that many alumni who grew up in the sixties will know what I mean." The light did not really turn on for Daub until he was in his early twenties. He had settled in a college town in the Midwest and was already married. He began visiting the university library and browsing the art books. "As corny as it sounds, I became 'inspired' as I read about certain artists and studied their work. It was like a new and wonderful world opened up for me. Making art was suddenly very important, and I began working furiously."

Daub started using watercolor because he had an old set that had been given to him as a child and could not afford much else at the time. As he improved, he began entering juried exhibitions: he gradually climbed up the art world food chain, first showing in local and then regional galleries. He still was uncertain about art as a viable career path but continued moving forward one step at a time.

Daub returned to college in his late twenties and received his Master of Fine Arts degree at 33. He was making a living from sales of his work but with some difficulty. Daub's first big break came in 1984 during a solo exhibition at a New York gallery that was getting some attention at the time. The director of 20th century art for the Metropolitan Museum came in and purchased two watercolors for the museum's collection. In 1991, the Met included a reproduction of one of those paintings in their annual engagement calendar, American Watercolors, and it was included in a show in the Lila Acheson Wallace wing. "It was a great thrill for me to see one of my paintings hanging in a museum that I visited as a child and admired so much."

Daub embarked on his dual career as an art professor in 1987. He accepted a position teaching at Kutztown University of Pennsylvania, only two hours from New York City. The art program was large enough to offer him the opportunity to teach his specialty, watercolor painting, but he has always continued steadfastly in his own studio work. "I believe that teachers in professional programs need to be role models for their students. My life in the studio is what gives me the energy and credentials to teach. If I tell my students, 'make a painting,' they know I am not going home to watch television while they're working."

In 1994, Daub began spending part of each summer in Italy, and in 1999, he founded Arts Sojourn (www.artssojourn.com), an art and travel group. The program specializes in Italy and is geared towards artists and creative people who desire to take a slow, less-regimented approach to cultural travel. "I love painting outdoors in Italy, and I enjoy the dynamics of an interesting group of companions," Daub says. He is also a contributing editor for Art Calendar magazine, a publication that deals with business issues for artists. He has recently embarked on a curatorial project with other artists and scholars. "We are taking what we think is a unique approach to the landscape and are very hopeful to get some museums interested in what we are putting together."

There have been other notable honors in Daub's career to date. In 1996, several of his watercolors were included in the American Academy of Arts and Letters Invitational Exhibition of Painting and Sculpture. In 2002, Daub was commissioned to do several site-specific watercolors for the new Four Seasons Hotel and Resort, in Jackson, Wyoming. He has had over twenty solo exhibitions of his work in galleries and museums throughout the United States, the next one scheduled for the spring of 2011 at ACA Galleries in Chelsea. This exhibition will feature mostly Daub's Conte crayon drawings.

Matthew Daub looks back on his days at Dwight with some irony. "It seems funny that I have become an active professional artist and a college professor, considering what a poor student I was. It has taught me that even my least motivated student may someday find the spark to kick it into gear, even if it doesn't happen during their time in my class."