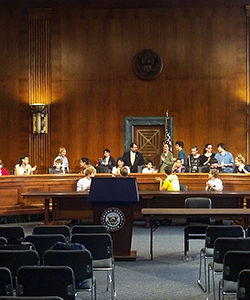 Senator Paul Strauss (Anglo-American '82) is currently serving his third term as a U.S. Senator for the District of Columbia. As a non-voting representative to the Senate, Strauss lobbies the U.S. Senate and the House of Representatives on behalf of the citizens of the District of Columbia. "The ultimate challenge is trying to manage the expectations of hundreds of thousands of citizens who are able to vote for me in an election, but for whom I am not able to cast a vote on their behalf, when I go to the United States Senate." While the Senator hopes to one day gain Statehood for the District of Columbia, he is still able to help many people in his position. "Certainly some of my favorite experiences have been attending my party's national conventions as a Super-Delegate, (where I actually do have a vote), and working with Presidents Clinton and Obama during their respective elections and on issues important to the District of Columbia."

Senator Strauss has always had an inclination for politics. He began in elementary school, volunteering for a Congressman running for New York City Mayor in 1973. "As it turned out, the work involved in a political campaign [was] well within my third grade skill-set at the time. I was stuffing envelopes, putting up posters, etc., all with a youthful enthusiasm which set me apart from the other volunteers." He continued to work on campaigns, including Governor Hugh Carey's and even Jimmy Carter's Presidential Campaign in 1976 (at twelve years old!). By the time Paul was a senior at Anglo-American, his work on the 1982 re-election campaign of Mayor Ed Koch landed him an internship in the Mayor's Office, something which was unheard of for a high school student. "When I was offered the internship in the New York City Mayor's office, the school Headmaster at the time, Mr. Paul Beresford-Hill worked with my teachers to make sure I could get to work on time." A self-proclaimed troublemaker at Anglo-American, Strauss was able to pursue his political aspirations with the help of his teachers and friends, many of whom he is still close with today. An important lesson he learned in high school came while running for the Head of the Student Government. "I lost narrowly by only several votes. Losing by so few votes taught me to always run hard, even when you are up in the polls." It seems that lesson has served the three-time Senator well in his career.

In addition to serving as Senator for the District of Columbia, Strauss founded the Law Offices of Paul Strauss and Associates, a civil litigation firm specializing in Real Estate, Business and Family Law. "Early on in my legal career, I performed legal work for children. In one case I will never forget, I was appointed a Medical Guardian ad-litem for a sick premature infant who needed a blood transfusion. The baby's mother refused to consent to the procedure based on religious grounds. The attending neonatologist was convinced the baby would die without it. I had to prepare and argue in an emergency hearing on just a few hours' notice, where the stakes were literally life and death depending on how I did. Knowing that when I won that case I may have saved a human life, that was the most rewarding experience I have had as a lawyer."

In October, the Senator took time from his busy schedule to meet with eighth grade Dwight students in Washington D.C. Senator Strauss gave the students the following advice: "You are never too young to start exploring either profession [politics or the law]. You don't have to be old enough to vote to volunteer on a political campaign, and even if you are too young to be a lawyer, you can try and do an internship in a law office." The students learned so much from their time with the Senator and thought it was the highlight of the trip! Learn more about the eighth grade visit with Senator Paul Strauss in the side bar.