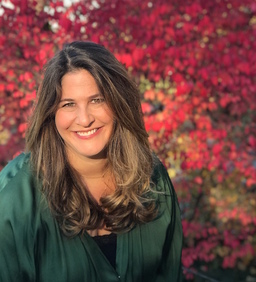 With the boom of an online community dedicated to telling stories about and by women called Women You Should Know, we couldn’t be more delighted to share the story of one of its founders, Cynthia Schultz-Hornig ’87.

Back in the day, Cynthia was called Cindy and Dwight was located in a small townhouse on East 67th Street. In the 30 intervening years since she graduated, Dwight moved across town, expanded significantly, and adopted the International Baccalaureate curriculum. While much has changed over three decades, the heart and soul of Dwight have remained the same: “There was a strong feeling of being part of a great community ― a family,” reports Cindy, who recalls her high school years with fondness, “and the teachers … we had some really great teachers!”

Cindy came to Dwight as a freshman and took to her new school quickly. Following in the footsteps of her brother, Kevin ’84, and their family’s athletic tradition, Cindy played basketball. The sibling hoopsters were known on campus as “Schultzie and Little Schultzie.”

“I was a forward and we had an impressive girls Varsity team coached by Edith-Marie Parker,” reports Cindy. “At that time, the girls team was doing better than the boys and we brought home quite a few wins!”

Off the court and out of uniform, Cindy had her own stylish flair and worked in retail jobs during high school, establishing herself as a bit of a fashionista. When it came time to apply to college, Chancellor Stephen Spahn, aware of Cindy’s penchant, suggested a school with a well-known fashion merchandising program: the University of Wisconsin Madison. It turned out to be a perfect fit.

After graduating from Dwight, Cindy moved cross-country and jumped from a tiny high school pond into a vast university ocean with upwards of 25,000 undergrads. “I loved every minute of it!” she shares. At UW, Cindy discovered a new passion ― writing ― worked on one of the school newspapers covering the arts, and ended up graduating with a BS from what is known today as the School of Human Ecology.

Back in New York City, Cindy’s first job was at a 57th Street art gallery, where she organized exhibits during the day and attended evening classes at NYU to earn a certificate of appraisal in fine and decorative arts. The inevitable pull of fashion drew her to Macy’s, where she ran the bridal registry, and then to Bergdorf Goodman as a fashion and wedding gown buyer and head of the bridal division. This came in quite handy, as Cindy walked down the aisle in one of her own selections!

The entrepreneur in Cindy emerged when she embarked on a retail venture working with husband-and-wife bridal designers. They opened a bridal salon in SoHo, offering customers an alternative to traditional gowns with dress details such as pockets and pant ensembles. By the time the atelier no longer needed her daily attention, Wolford, the hosiery brand headquartered in Austria, came calling. Cindy was off to Europe frequently to direct PR and tells us that “working with famous fashion photographers such as Helmut Newton and designer Phillippe Starke brought all the worlds I loved together ― fashion, retail, art, and writing.”

When jewelry designer David Yurman tapped Cindy for its own PR needs in 2000, she made the move and met the person who would become her business partner to this day, Jen Jones. “We shared the same work ethic and enjoyed collaborating, so in time it made sense for us to move from working in-house to starting our own agency called Outhouse PR,” Cindy explains.

A Momentous Day; A Meaningful Outcome

Before the two could open the doors of their exciting new enterprise, they had to tie up some loose ends for the jeweler during New York Fashion Week. This work kept Cindy and Jen from going straight to their new space at 111 Broadway ― one block away from the World Trade Center ― on the morning of 9/11.

Cindy and Jen became two of countless New Yorkers, who for whatever reason ― through whatever twist of fate ― were spared the horrors of that morning. The devastating terrorist attack that took the lives of thousands had also brought the downtown area to its knees. So when the time came a few months later to unlock their office space, Cindy and Jen were pleased to join the businesses that helped to bring the neighborhood back to life.

The duo prospered quickly, as many big brands were dropping big agencies at the time in favor of more flexible, talented smaller agencies. They signed a range of luxury jewelry, watch, and retail accounts and Outhouse PR became an award-winning business. As the ten-year anniversary of their collaboration approached, Cindy and Jen wanted to embrace something new to mark the milestone as well as to grow in a new direction.

“While some were tapping into social media at the time, not everyone was playing in that space. We wanted to do so with greater impact to benefit our clients and build our own brand at the same time,” explains Cindy. “Simultaneously, we realized that we had been meeting more and more interesting women doing amazing things, but their stories weren’t being told in the media; the balance was tilted heavily in favor of celebrities, reality shows, and splashy headlines.”

With a robust skill set and a conviction to celebrate everyday women doing extraordinary things, the duo behind Outhouse PR were inspired to create a new platform for storytelling and Women You Should Know (WYSK) was born.

Because their own history as business partners is tied to 9/11, Cindy and Jen wanted to honor the day by inaugurating WYSK with stories of women who were first responders. “But we couldn’t find them,” Cindy reports. “We were able to identify many surviving wives and women volunteers, but none from EMS or the police and fire departments who played a vital role in search and recovery efforts. Except one. We kept coming up with one name. Brenda Berkman.”

A Powerful, Dynamic Community of Women We All Should Know

Brenda Berkman, an attorney who fought ― and won the case ― for women’s rights to join the NY Fire Department, also became one of the first women to join New York’s Bravest. She was among those who rushed to Ground Zero on 9/11 as a first responder. Brenda shared her compelling story when WYSK went live and within 48 hours, The Huffington Post Women’s Division called wanting to syndicate the piece, as well as several additional profiles WYSK had written about other women first responders. More and more stories were to come, along with requests to syndicate WYSK content from major media outlets, including The New York Times, The Washington Post, The Chicago Tribune, Mashable, Jezebel, and MSNBC, among others.

Finding their WYSK work to be so fulfilling, the PR twosome ultimately bid farewell to their Outhouse clients during 2012 and turned their attention full-time to “telling the untold stories of relatable, everyday women and girls across the country and the globe who are making things happen in their world; women who have outperformed, innovated, discovered, defied and soared. By sharing their stories and giving them a voice, we have an incredible opportunity to inspire others.”

WYSK has grown dramatically over the last six years as a digital hub and community; this year’s stats are expected to exceed five million page views, and as of today, they boast nearly 400,000 Facebook followers. The site’s trailblazing founders were featured in the Ms. Foundation 2015-16 #MyFeminismIs campaign, an annual effort that shines a light on leaders in all fields who support intersectional feminism.

With the success of WYSK, Cindy and Jen received an increasing number of pitches from women wishing to connect with the site’s audience for crowdfunding purposes ― women who had a vision for changing the world, for launching start-ups, for making things happen. In a word: entrepreneurs.

As entrepreneurs themselves, Cindy and Jen saw beyond a need; they envisioned a solution. Building on the WYSK brand and robust community, they launched a sister crowdfunding site, Women You Should Fund, to connect burgeoning enterprises with like-minded potential backers. The first WYSF campaign was #BringHarrietHome, designed by the Harriet Tubman Home last March. Its goal was to raise the funds needed to bid on a rare and newly discovered photo of Harriet Tubman coming up for auction. In less than three weeks, the campaign exceeded its $25,000 goal, but the winning bid by the Library of Congress far exceeded the estimated value. While unable to bring Harriet home, the extraordinary effort made national headlines, as did the duo behind Women You Should Fund who were interviewed by Forbes.

“We’re proud that we can offer campaigns something that no other crowdfunding platform can ― an established, engaged community plus exposure,” explains Cindy. “We’re also there for campaign creators with step-by-step guidance and to make sure that they have the right content to position their campaigns for success. Since WYSF debuted earlier this year, the campaigns themselves have evolved to reflect the WYSK mission more closely and more applicants are signing up. It’s very exciting.” And empowering.