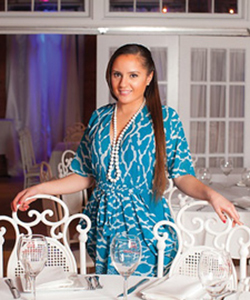 "Dwight introduced me to people of so many different cultures," recalls Jaleene Rodriguez '04, who joined Dwight in sixth grade after her family relocated to Manhattan from Rockland County. "The student body at my previous school was not diverse and coming to Dwight opened the door to meeting people from a host of different backgrounds. The experiences of getting to know, and communicating, with people from around the world has served me well in so many areas of life, including business."

Business is a family affair for Jaleene, who together with her sister, Jewelle '06, co-own and operate a chain of Don Coqui restaurants, and represent the third Rodriguez generation in the restaurant business. Their grandfather, Jimmy Rodriguez, Sr., began by selling seafood from a pushcart in the Bronx before converting it to a storefront and then to a restaurant called Marisco del Caribe with his son, Jimmy Jr.

Jimmy Jr. became a noted restaurateur and in the 1990s added Sofrito and several dining establishments criss-crossing Manhattan and the Bronx known as Jimmy's, drawing a power clientele ranging from pro athletes to politicians. Don Coqui, like Sofrito, features Puerto Rican cuisine with family recipes on the menu. The restaurant, as billed on its website, "represents several generations of 'Dons' and 'Doñas' who have paved the way for us."

The Doñas of today, Jaleene and Jewelle, take turns working around the clock. Literally. Jaleene spearheads all the operations during the day — inventory, finances, HR, marketing, and reservations — to ensure that everything runs smoothly when Jewelle arrives for the evening rush. Jewelle oversees the back of house, food preparation, front of

house, and all-important customer service. "Our father, who has been in the business for over 30 years, taught us that quality, consistency, and customer service are fundamental to success," explains Jaleene. "He eats, sleeps, and dreams restaurants!"

When Jimmy Jr. launched the first Don Coqui in New Rochelle in 2009, he called upon his daughters to participate. They answered with a resounding yes and together, they opened more locations in White Plains, Upper Manhattan, and on City Island. With Jimmy Jr. as organizational director, the family business expanded further and now includes

soul food establishments: Get Soul in New Rochelle, Uncle Al's in the Bronx, and combined Latin and soul food at Sapitos in Spanish Harlem and the Bronx.

"The restaurant business is in our blood," Jaleene says, on behalf of both her siblings; in addition to Jewelle, their younger brother, Jimmy III, who attended Dwight, manages one of the Don Coqui spots. The sisters, who were honored by the New York City Hispanic Chamber of Commerce at its 2014 Women in Business Luncheon for their contributions to expanding business within the Hispanic community, attribute their success to Jimmy Jr. "Our father taught us everything he knows ... not to repeat the same mistakes that he made and that you can achieve anything that you put your mind to," Jaleene shares. "He provided all of us with a great blueprint."

It's no surprise that the sisters ended up working together because they were always interconnected. "While we pursued different passions at Dwight, our paths always came together. I was on a few different sports teams and my sister became the manager of those teams so that we could spend more time together while traveling to and from games. Jewelle has always been my collaborator and partner in crime. Now we are business partners and decision-makers," Jaleene says proudly.

At Dwight, Jaleene was on the track, cross-country, and basketball teams. "One of my greatest memories is from eighth

grade when the Girls Varsity Basketball team went to the New York State championships," Jaleene remembers. "We didn't win but Chancellor Spahn, himself a basketball player, was overjoyed with our team's progress that year!"

The secret to their success, reports Jaleene, was Coach McElaney. "His method was to create a team — a family — with one goal: To win via defense. He told us that any team can show off with good offense, but defense is the key to success. On a personal level, Coach taught me how to become an awesome three-point shooter. I practiced and practiced a technique he showed me over and over again. And I've since taught it to my kids!"

"I loved my Dwight teachers and coaches and was impacted by all of them in some way, shape, or form," Jaleene reports. In addition to Coach McElaney, she credits cross-country and track coach Ms. Sferrazza for her development as a runner. "Thanks to Coach Sferrazza's guidance, I went to college to compete as a middle-distance runner." Jaleene explains, "I started at Dwight as a sprinter, but she told me that sprinters were commonplace at the college level and

encouraged me to excel as a middle-distance runner so that I could distinguish myself."

And so Jaleene did, working hard, training and persevering, even fighting through physical pain at times. It was well worth it. Jaleene's resolve took her to Marist College in Poughkeepsie, NY, as a middle-distance runner recruit.

At Marist, Jaleene converted her athletic talents into a bachelor's of science degree in sports medicine with a minor in business administration. Her goal: To do something different than the family business.

Jaleene's major required that she spend so much time with other athletes in pursuit of their training that it left precious little time to devote to her own sport. But it did enable her to launch a career in personal training. After graduating from college, Jaleene worked at the Sports Club of LA in Manhattan, where celebrities and professional athletes trained. While she had embarked on a path of her own with every intention of continuing, it wasn't long thereafter that Jimmy Jr. upended her plans!

When Jaleene and Jewelle joined their father at Don Coqui, they tapped into their experience as teenagers working alongside him during school and summer breaks. It seems that their family legacy was predestined. For Jaleene, she wouldn't have it any other way.