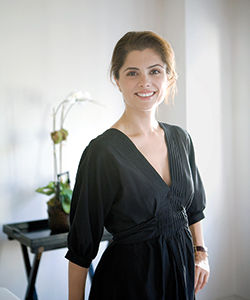 Violetta Bitici represents the new guard of restaurateurs. As the owner of Macelleria, Violetta helped spearhead the revival of the meatpacking district nearly ten years ago. The Italian steakhouse has been lauded in Esquire as one of the Top 20 Steakhouses in America, Top Steakhouse in New York City by Citysearch, New York Magazine, in Time Out, New York and has become a favorite for neighborhood residents, foodies, tourists and celebrities alike.

As the daughter of famed restaurateur Sergio Bitici, Violetta grew up immersed in New York City's restaurant culture. "My favorite memory was going to an Italian restaurant for a French class with Dr. Chambart! It was a classic moment," she says, remembering her time at Dwight. While in her 20s, Violetta had aspirations of establishing a restaurant that pioneered a neighborhood largely untapped by businesses other than the traditional meatpackers. She wanted to extend a sophisticated menu in an unpretentious and warm surrounding.

Taking cues from its name, which means butcher
shop in Italian, Macelleria's stylized interior boasts antique meat lockers with crafted wood handles, exposed brick and heavy oak structures. The fare at Macelleria is based on simple food, from the sumptuous USDA prime, dry aged Porterhouse for two to the Pappardelle al Cinghiale with wild boar sauce to the delicious, homemade desserts.

A graduate of New York University, Violetta gives back to the community by being involved in numerous charity organizations such as the Lincoln Center Theater Young Patron Program, Central Park Conservancy, American Institute of Wine & Food, Women in Food Service, Chamber Dance Project, Meatpacking District Association Advisory Board and the Greenwich Village Preservation Society. Her restaurant has participated in events for Voices Against Brain Cancer and Taste of Pride for the LGBT Community Center, among others.

1. Saute the bacon with the garlic and onion.

2. Remove the garlic as soon as it begins to brown, add the hot pepper flakes and the drained, chopped tomatoes.

3. Add salt to taste and cook over a medium heat for 30 minutes, stirring to prevent sticking.

4. Cook the bucatini pasta until just done in boiling salted water, drain and place in a serving dish.

5. Pour over the tomato sauce, sprinkle with Pecorino Romano cheese and serve immediately.