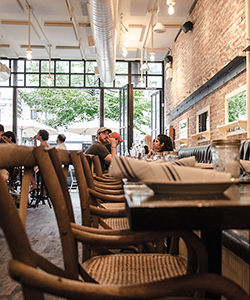 Jacob's Hadjigeorgis '02 is not your average restaurateur. Owner of the acclaimed foodie hotspot, Jacob's Pickles, he has brought flavor and style to the Upper West Side. Jacob says he has always been curious — both in life and with food. As a kid he was curious about pickles (perhaps in response to his grandfather's backyard garden), but he didn't start experimenting with pickling until after college. At that point, he viewed it as a hobby, a cathartic, creative outlet. Coming from a "food family," Jacob spent countless hours in his father's restaurant and says he was always interested in cooking. A self-taught chef, he has never been afraid to try something new.

While a student at Dwight, Jacob was Vice-President of the Student Council and a competitive fencer. He continued fencing at NYU, where he received his undergraduate degree. Jacob promised his mother he would go to law school after college — despite his "food family," they did not want him to get into the restaurant business. But Jacob realized he couldn't see himself being a lawyer and decided he needed a creative outlet, which came in the form of food. His first venture came in 2008 with a mac n' cheese shop, MmMac n' Cheese in Boston's Quincy Market. During this time, Jacob experimented and mastered the art of mac n' cheese and the restaurant is still a popular spot in Boston.

While he is still involved with MmMac n' Cheese, Jacob decided to come back to New York City and try opening a restaurant in his home town. With the guidance of his father and almost a year in preparation, he opened Jacob's Pickles on December 14, 2011. The inspiration behind the restaurant is New American Craft, which is translated into the décor and dining experience. Focusing on all-American ingredients, Jacob uses regional American products and serves select American craft beers (many of which are not known in the U.S. market). Each item on the menu is decadent, hand-crafted, and deliberate with "little surprises in the food." Jacob's Pickles takes risks with comfort foods (think buttermilk fried chicken, mac n' cheese, biscuits, and of course pickles), creating some of the most delicious and interesting foods you have ever had the pleasure of tasting.

In addition to running a successful restaurant, Jacob found a way to give back to Dwight. On October 13, Jacob hosted the Dwight School Reunion Day at Jacob's Pickles. The event was a great success and no one could stop talking about the food! The Dwight community wishes Jacob great success and a very happy one-year anniversary to Jacob's Pickles.