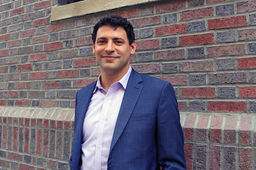 Fifteen years after graduating from Dwight, Jonathan Shechtman '03 found himself back on campus this spring — and back in the classroom — this time as the teacher. The tables had turned and he was the one imparting his knowledge to students in an eleventh-grade business class. The topic was real estate investing, Jonathan's area of expertise as Managing Principal of Axonic Properties in Manhattan.

Jonathan says that he was happy to share his experience with a new generation of students because "Dwight made all the difference in my own life."

"Dwight focuses immensely on students' strengths and passions, which was far different than other schools I had attended and where being well-rounded was the goal for all," explains Jonathan. "At Dwight, I was encouraged to concentrate on my favorite subjects, math and business, in which I excelled more than other subjects. In addition, Chancellor Spahn's unique vision in education inspired me as a teenager — and he continues to inspire me today as an adult."

Jonathan was 16 when he first met the Chancellor. As a resident of the Upper West Side, Jonathan didn't have far to travel to school, but upon first crossing the West 89th Street transom, he discovered a whole new world: Dwight's strong focus on international education and emphasis on critical thinking ― two IB fundamentals that set Dwight apart — which made a difference in his own life.

In addition, Jonathan reports that the inclusive nature of the community, which welcomed him warmly, and the leadership opportunities afforded to Dwight students were equally impressive. He became part of the Institute for Civic Leadership, founded by Kirk Spahn '95, and launched the after-school investment club. Jonathan explains that he had always been interested in business, so this was a great way to fuel his spark of genius.

Among the coaches Jonathan remembers the most fondly is the late Radomir Kovacevic. Well-known for his intense workouts that pushed students well beyond their limits physically and mentally, Radomir is a Dwight legend among many alumni. Born in Bosnia, he was the 1980 Bronze Olympic medalist in judo who made many a student into a better athlete — and a few into champions. The rigor of Radomir's sometimes-alternative exercise regimens prior and after school also left a fair number of students in a heap.

For Jonathan, "Radomir was a mentor, teacher, and friend. He inspired me to think about mind over body; and encouraged me to question everything and to always believe in myself. He took me under his wing and had an enormous influence on my sense of self that remains strong to this day."

Armed with a strong belief in his own abilities, Jonathan graduated from Dwight and went to Bucknell University, where he earned a BS in Management and Finance. While there, he started the real estate investment club; and hosted the college radio station's controversial talk show titled "Showering with Friends," in which both the format and the issues discussed had the whole campus buzzing about the show.

After Bucknell, Jonathan joined a private equity real estate fund for a few years. "When the housing market crashed, I moved with my friend from college to Naples, FL, where we saw an opportunity with the massive amount of foreclosed homes," reports Jonathan. The duo began flipping houses with money invested by their former fraternity brothers. The enterprise was successful and a year and a half later, they started buying and renting single-family homes.

New York beckoned Jonathan back in 2012 and he joined Axonic, a hedge fund that embraced his vision for purchasing these homes. Now they have a few thousand apartments and houses under management valued over $200 million. Jonathan is the Managing Principal for all of the firm's real estate business,

Axonic Properties, requiring him to travel every other week to Florida — a commute that has become part of life. Bringing experience in distressed real estate investing, Jonathan is responsible for the strategic repositioning and business plan for each investment opportunity that arises.

With a track record of success and fondness for Dwight, it's no surprise he was tapped to talk to our business class students. While Jonathan reports that things have certainly changed quite a bit on campus in the years since he was in the classroom, one thing has not: Chancellor Spahn. "He is still such a visionary force. The Chancellor is a brilliant thought leader in education. His ability to think creatively and look at every situation as an opportunity truly sets Dwight ahead of other schools. And he remains a very important person in my life. I always want to catch up with him — and if I can get involved by teaching students, all the better!"