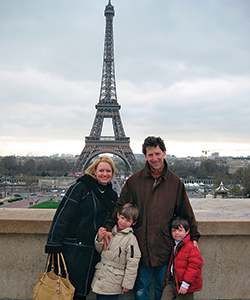 Ever dream of running away to your own medieval hamlet in Europe? This may sound like a fairy tale, but for Arthur Zinn '81 it has formed the latest exciting chapter of his life. In 2000, just a few months after his honeymoon, Andrew and his wife, Martha, became proud owners of Barbazzano, a long-deserted hamlet in Tuscany.

When he graduated from Dwight, Andrew started off on a more traditional path. He first graduated from Yale with a BA in Political Science and then NYU Law School with a JD. But after five years of practicing commercial litigation, he felt restless. So, in 1997, he left law and began a search for a project to satisfy a childhood ambition to restore historic properties. He scoured Brooklyn looking for old, untouched brownstones or 19th century stone warehouses but found fulfillment of his dream in the unlikeliest of places. During a drive in the Italian countryside, he and his brother-in-law found themselves at the end of a dirt road, standing in front of a pile of rubble with trees growing on top. It was for sale and by the third ruin they were hooked.

Andrew and his brother-in-law began, as the sole laborers, to excavate and restore the beehive brick oven located in an outbuilding on the property. The challenge was huge: the hamlet consisted of two stone houses totaling 12,000 square feet with foundations dating to AD 1000, an ancient barn and the oven building. He thought then: "How easy to restore the houses, rent them out and have a vacation property that carries itself!" Had he known then that the project would consume the next six years of his life and most of his resources, he might have balked. Fortunately, he was able to see the project through to completion. Andrew's crew grew from two to nine amateur builders under his brother-in-law's tutelage. He learned how to be a mason, carpenter, plasterer and operator of heavy machinery, as well as being his own general contractor. His goal was to restore Barbazzano using authentic salvaged materials.

Finally, in the summer of 2005, they celebrated the grand opening of Barbazzano. The principal organist of the Bologna cathedral gave a dedication concert on the reproduction 17th century Italian house organ that his parents had commissioned for the house. And one week later, Andrew, Martha, and their two sons (Henry and Teddy) packed the belongings accumulated during his five years in Italy and shipped them to their new home in St. Catharines, Ontario (just five minutes from Niagara Falls). Over the next two years, he split his time between developing a marketing strategy and website for Barbazzano (www.barbazzano.com), restoring their long-neglected 1929 Tudor-style home and overseeing the construction of a summer cottage in Muskoka (a beautiful lake resort area north of Toronto).

Last year, after a ten-year hiatus and after having gotten construction out of his blood (for a while), he returned to the practice of law and has found work as a temporary litigation attorney for several firms in New York City. Meanwhile, he continues to market Barbazzano and rent it to families, groups of friends, wedding parties and executives seeking a beautiful retreat locale. He has also delivered lectures at the New York and Boston Yale Clubs and the Boston Union League Club in which he document the restoration of Barbazzano and offers his observations on life in central Tuscany, Italian culture, food and family.

Arthur stopped by Dwight this past April to visit with Chancellor Spahn and tour the School. When asked about his days at Dwight, Andrew commented, "What impressed me most about Dwight was the extraordinary commitment shown by almost every faculty member. Not only was the teaching method personal, our teachers frequently joined us outside in good weather to talk or joke and were always available before or after class. Mr. Cerullo's English classes were interesting and humorous. Mr. Zachary made Chemistry fun, and I still have fond memories of studying such landmark cases as Plessy v. Ferguson in Mr. Engle's Constitutional Law class!"