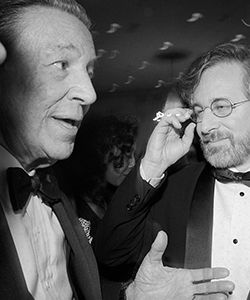 This past summer, the work of photographer Miles Ladin '86 was on display in a solo exhibition at The Wolfsonian Museum in Miami Beach, Florida. The Wolfsonian commissioned Ladin to create a contemporary portrait of the Miami Beach bathing culture to complement a historical exhibition of swimwear. In his installation, wryly titled Sun Stroke Stimulus, Ladin sees "both the raw beauty found in bathing culture as well as the aspirational desires presented in the display of flesh. Sun, surf, fabric stretched against a buttocks, cleavage, and biceps are all tactile elements that give our eyes pleasure. The acquisition of the tan, the physique, the lifestyle, is all meant to entice the viewer to desire what they see."

A former student of noted photographer Larry Fink, Ladin is known for his sardonic investigations of the rich & famous. His photojournalistic career started in the early '90s when he shot a weekly nightlife column titled "The Night" for The New York Times' Sunday Styles section. Subsequent venues for his subversive social commentary have included a recurring photographic pictorial "Paparazzi" for W Magazine and coverage of the 1996 Presidential Elections, where his images appeared in George Magazine alongside writer Norman Mailer's text. Currently, Ladin covers New York's Fashion Week twice a year for WWD-The Collections and shoots private events.

In 2001, Ladin published his first limited edition artist's book titled Lunch Poems. This photographic homage to the poet Frank O'Hara was subsequently acquired by The Museum of Modern Art's Special Collections Library in New York. His second artist's book, an homage to the Pulitzer Prize-winning poet James Schuyler, is included in the Whitney Museum of American Art's Special Collections Library. Each edition is a collection of unbound photographs by the artist and poems by the respective New York School poet. Printed by Ladin himself with pigment ink on fine art paper, these books are art objects suitable for the coffee table as well as the wall.

This fall marked the release of The World's Top Photographer's Workshops: Celebrity & Performance. Along with the work of nine other celebrity photographers, this book contains eighteen pages of Ladin's signature black and white images as well as an interview, image commentary, and technical notes. Celebrity & Performance is available at major booksellers and online. An interview with the artist also appeared on Canadian Fashion TV and can be viewed on FashionTelevision.com by searching for "Beauty on the Beach".

When asked to reflect on his Dwight days, Miles remarked, "I had a frequent presence during the school day and after school in Miss Cehelskey's art room in the 67th Street building. While studying under Miss Cehelskey's tutelage, I was encouraged to bring work to the city's first commercial gallery for young artists, Rainbow Connections. This resulted in my first professional exhibition in the Tribeca Gallery at age 17."

If you are interested in contacting the artist for information on his exhibition prints, limited edition artist books, or event photography, please email: Miles@MilesLadin.com