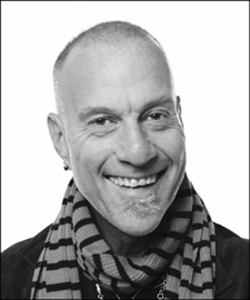 We delighted in turning the tables on investigative reporter Serge Kovaleski to learn about his days at Dwight and foray into journalism.

It appears that Dwight Chancellor Stephen Spahn, with his inimitable gift for seeing a student's spark of genius — sometimes before it is revealed — foresaw that Serge had what it takes to succeed as a newsman. "I remember vividly talking with the Chancellor when I was a student. He really saw in me creativity — not as an artist, per se — rather in letters or journalism," recalls Serge, whose bylines have graced the front pages of The Daily News, The Washington Post, and The New York Times.

Tapping into Talents Early on

Born in Cape Town, South Africa, Serge spent his early childhood in Sydney, Australia, before his family relocated to New York. They settled on the Upper East Side and Serge attended PS 6 prior to coming to Dwight in seventh grade. The time was the early 1970s and "the vibe of the school was very appealing," he says. "Not to mention Dwight was coed, unlike the all-boys school we considered!"

"When I came to Dwight for my entrance exam, I distinctly remember meeting Chancellor Spahn. He made an impression and continued to play a role in my development throughout my years there. He tapped into things about me and my talents early on," Serge says, harkening back to his younger self, who had a passion for music and visions of a recording contract in his future.

At Dwight, Serge and Peter Allegretti '79 formed their own band called Triage, played gigs, and cut demo songs. Peter was the guitarist and Serge wore several hats as bass player, lead singer, and composer of the band's original music. As an aside, wearing hats (literally) is a long-standing Serge signature. A peek at his yearbook page reveals him sporting a fedora; in his Times bio, Serge dons a more modern topper; and his Twitter pic boasts a Yankees baseball hat.

When not playing music, Serge was playing soccer. "I was co-captain of the JV and Varsity soccer teams during some exciting championship matches. After cheering us on, the Chancellor drilled into me his belief that I was as a natural leader. That's how he saw me, which meant a great deal," Serge shares. "I have many happy memories of my time at Dwight with friends and classmates. We were a tight bunch and those were some of the best days of my life."

After graduating, Serge attended William and Mary, where he majored in philosophy, and followed up with studies in French philosophy at the Sorbonne. Being in Paris opened the door for plenty of travel and Serge found himself in Eastern Bloc countries a few years before the Berlin Wall came down. "What was happening was so extraordinary. I was struck by the historic events and wanted to convey the news, which launched me into journalism," he explains.

Yet crafting college papers about existentialism didn't translate into a job as a columnist. Thanks to a family friend, Serge found a position at The Miami News, where he joined the ranks of administrative assistants who aspired to be reporters. While attending to their work, they would listen to the police scanner to see who had an ear for stories. "After six months, if you could prove that you could write stories, you made it. And I did, which meant that I didn't have to start my career in a miniscule market," he reports.

"It was in the heyday of the 'Miami Vice' era, which was a time of anarchy. Miami was an amazing place to cut my teeth," Serge recalls. But after a year and a half on the City and Business Desks, he wanted to head home, so he sent his clips to Steve Yahn, an editor at The Daily News who had a reputation for eyeballing young talent. With a classic movie turn of phrase, Yahn told Serge, "You remind me of the page-one fire I had at your age."

After beginning as a freelancer, Serge quickly joined the staff when Mr. Yahn chose to overlook lack of experience in favor of talent. "This was my big break," says Serge, who describes working alongside Jimmy Breslin and others with big personalities and big cigars straight out of central casting. "I learned so much from them. My last story was a look inside City Hall under Mayor Dinkins, which came right before the famous Daily News strike in 1990. I wasn't going to cross the picket line and post-strike, everything changed at the paper, so I moved on."

Phil Dixon, one of the great newspapermen of the day, hired Serge at The Washington Post. After writing about local stories inside the Beltway, Serge covered national stories such as the Oklahoma City bombing and the rise of right-wing militia. He went on to become a foreign correspondent in Latin America for four years, two of which were spent living amid great instability in El Salvador. "Living there, plus working in another language, will make you ten times the reporter you were before," claims Serge, who returned to the newsroom as an investigative reporter on the Metro Desk upon completion of his foreign tour.

It would take another accomplished newsman to bring Serge back to New York: Joe Sexton, Metro Editor at The New York Times, who Serge describes as a "soul brother with a real investigative mindset." The year was 2006, and Serge shares, "There was no better journalism than at the Times and no better place to be than the city that you love, so I came home."

The exciting, sometimes gritty, world of investigative reporting often takes journalists deep into stories for extended periods of time. For over a year, Serge dove into an investigation about Brooke Astor's son, Anthony Marshall, who swindled millions from his mother, and Serge is proud that his reporting contributed to Marshall's conviction and imprisonment. Following on the heels of this big story was another, featuring New York State Governor Eliot Spitzer and prostitution in the headlines. The scandal led to Spitzer's resignation and Serge brought home a 2009 Pulitzer for Breaking News Reporting. He had "the first and only real in-depth interview with 'Ashley,' one of the prostitutes — not about lurid details, but about how her life intersected with Spitzer's, changing the course of history for the state and country."

With many hours and hard-hitting stories logged from the Metro Desk, Serge transferred to the National Desk, where he covered major stories such as the Boston Marathon bombing; legalization of marijuana in some states; and the theater shooting in Aurora, CO.

Most recently, he joined the Times' Culture Desk, adding Culture & Arts Correspondent to his distinguished credentials — but still wearing the hat of investigative reporter to acclaim: Serge won the paper's 2015 third quarter Publisher's Award for journalistic excellence. He led a team recognized "for their groundbreaking coverage that changed the conversation about perhaps the most significant publishing event in years — the sudden appearance of a second novel by Harper Lee."

While Serge reports on the wide world of the arts, it isn't lost on us that his move to the Culture Desk enables him to cover his first love — music — and that Serge has come full circle from his days at Dwight jamming with Triage.